Ismail is difference in battle of football unbeatens 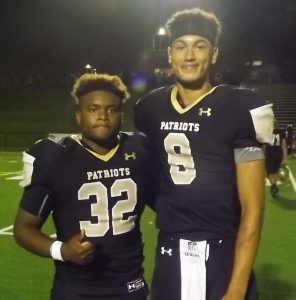 With MIAA B Conference play on the horizon, John Carroll School got a big game from Qadir Ismail as the Patriots held off Edmondson, 29-24, in a non-league football matchup of undefeated squads in Bel Air Friday evening.

Ismail, a 6-foot-7 senior quarterback, rushed for 115 yards and three touchdowns, and Dalen Berry accounted for a rushing score and 85 yards. The Patriots (4-0 overall) amassed over 300 yards rushing.

“Our guys up front did a great job blocking and Ismail and Berry showed great desire as well,” John Carroll coach Keith Rawlings said. “Tonight they showed how hard they work and that they are pretty special.”

Edmondson junior quarterback Teon Gardener threw for 133 yards with one touchdown in the air another on the ground. Senior receiver Deshawn Ruffin hauled in six catches for 89 yards and a touchdown.

Edmondson (3-1) had one last chance at the lead late in regulation, getting the ball at its own 41-yard line with 1 minute, 28 seconds to play after a fourth down stop. Gardener completed a seven-yard pass on the left side to Adrian Lindsey, but on the next play, Gardener was forced out of the pocket and was stripped. CK Oduok, playing in first game, recovered to seal the win for the Patriots.

The hosts wasted no time getting on the board, as Ismail’s 42-yard score capped on a nine-play drive.

“The line did such a great job opening up the gaps,” Ismail said. “It wasn’t anything I really did on my part. They made big holes and I just through them, just made my job easy tonight.”

Daniel Jenkins answered for the Red Storm on the ensuing the drive with a two-yard touchdown run. Damontaa Jones’ 35-yard pass to Trejour Owens on 4th-and-10 highlighted the drive.

On the first play of Red Storm’s next possession, Johns hit a streaking Justin Hawkins for a 71-yard reception, giving the Red Storm a 12-7 advantage with just over a minute remaining in the opening period.

“We knew that they [Edmondson] was a big play team, we were able to make some adjustments, but they got some really, really talented dudes,” Rawlings said. “They’re going to go far in the playoffs”

Berry helped the Patriots get back on track, rushing for 14 yards on the first three plays for John Carroll on a drive that started at their own 44. Ismail finished the possession with a 39-yard touchdown scamper to reclaim the lead for John Carroll.

“Sometimes the holes won’t always be there, but as long we keep pounding the rock, we’re going to wear down our opponents,” Berry said.

Ismail delivered again, scoring on a three-yard run that finished off a six-play, 60-yard drive. Will Giannelli’s two-point conversion run put John Carroll up 29-12, but Edmondson rallied in the fourth.

Gardener got into the end zone from a yard out with 11:26 left in regulation. Three minutes later, Malik Taylor scooped up a fumble off a backward pass and returned the ball down to the John Carroll 15-yard line.

Gardener threw his second touchdown pass of the game to Deshawn Ruffin on a slant route, pulling the Baltimore City squad to 29-24 with 8:30 to play. The Red Storm got one final opportunity late in regulation, but was unable to complete the comeback.

John Carroll, which won two games last fall after going 13-0 and winning the MIAA B title, take on Boys Latin next weekend.

“This was a great game to help us build momentum, but next week is a whole week as far as we are concerned,” said Ismail. “We are 0-0 as far as our conference goes.”

Ismail is difference in battle of football unbeatens