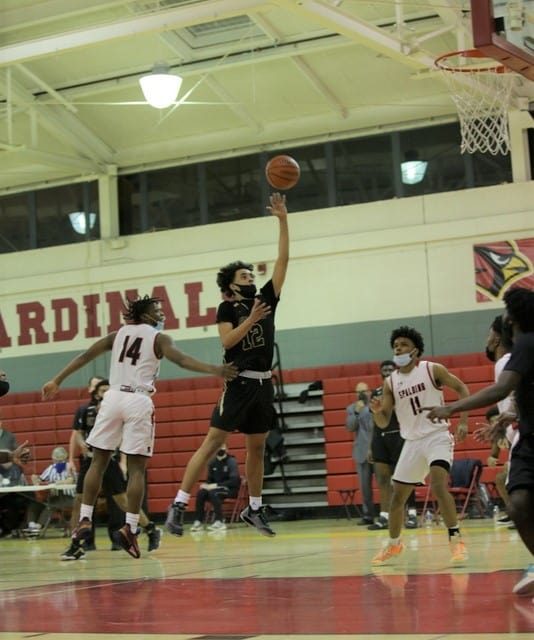 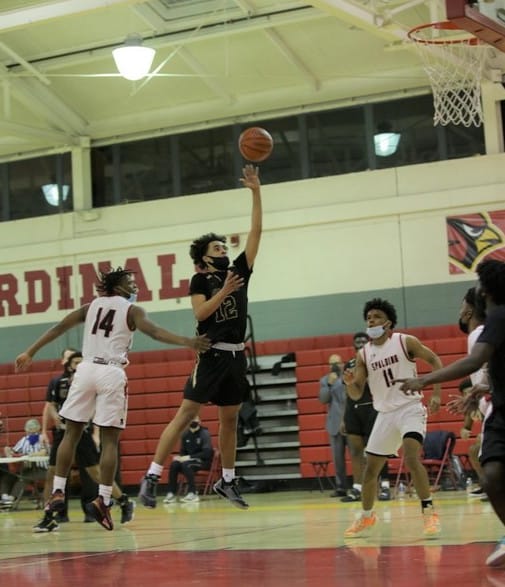 John Carroll’s Tyson Commander puts up a shot during the second half of Wednesday’s Baltimore Catholic League Tournament semifinals. The sixth-seeded Patriots advance to the final with a 69-66 victory over No. 2 seed Archbishop Spalding at Calvert Hall. (photo – Jimmy Fields Sr.)

One team sits on the doorstep of history. The other is on the verge of an unlikely title.

In a season like no other, the 50th Baltimore Catholic League Tournament championship is down to John Carroll School and St. Frances Academy. They advanced with semifinal victories Wednesday evening at Calvert Hall College.

The Panthers defeated Our Lady of Mount Carmel, 68-49, while the Patriots held off Archbishop Spalding, 69-66, in the nightcap. The victors meet Friday evening at 6 p.m., back at The Hall, for possession of the Brother D. John Smith Trophy.

On paper, St. Frances posted another a double-margin decision. But, for the first time since their last visit to Towson, the top-seeded Panthers had to earn it in the fourth quarter.

The Panthers (15-0 overall), who’ve won all their decisions by double-digits, appeared early headed to a decisive victory. But Mount Carmel made things uncomfortable for the three-time reigning BCL tourney champ Panthers.

In the end, the East Chase Street school is 32 minutes away from Baltimore basketball immortality.

“It’s the playoffs,“ said St. Frances coach Nick Myles, whose team pulled away late from Loyola Blakefield at Jerry Savage Court a few weeks ago. “They’re great coaches and players in this league and they’re going to scout. The margin of error is much tighter. It’s good to get a little adversity.”

“We were able to finish it out and make the right plays to win,” said Lamothe.

The 6-foot-4 shooting guard, part of a dynamic underclass nucleus, navigated the Panthers in the fourth Wednesday. He scored nine points in the frame, starting with two free throws after Mount Carmel had closed to 48-42 with 6 minutes, 13 seconds remaining in regulation.

Later, Lamothe drove the lane and dished off to senior center Julian Reese for a dunk, pushing the Panthers’ lead back into double-digits at 54-44. He dropped a 3-pointer to make it 59-46, and converted off a spin move in the lane, putting St. Frances in the clear, 61-47, with 2:15 left to play.

“My teammates was helping me get open and be a threat,” said Lamothe. “It was a team victory.”

“Jahnathan is a big-time player. The guys did a great job mentoring him last year,” said Myles. “He stepped up in a big-time moment.” 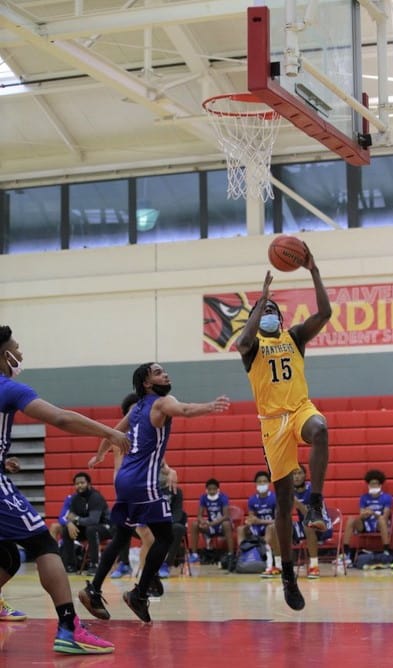 St. Frances’ Jahnathan Lamothe goes up for two of his 19 points against Mount Carmel in the first semifinal of the 50th Baltimore Catholic League Tournament. The undefeated Panthers advance to their fourth straight final with a 68-49 victory. (photo – Jimmy Fields Sr.)

St. Frances, which hasn’t loss a BCL contest (including playoffs) since January 2020 (62-53 loss at Mount St. Joseph), led 19-3 after one quarter Wednesday. It was 29-10 midway in the second after a 3-point play from junior forward Cortez Johnson before a Lamothe basket made it 32-17 at halftime.

Lamothe dropped a dagger after Mount Carmel (11-4), the No. 4 seed, itched to 34-24 early in the third, and St. Frances looked back in control with 46-28 cushion with 2 minutes left. Mount Carmel closed the third quarter with a flourish, capped with Mitchell Kalu’s dunk to pull to 46-36.

Kalu continued the momentum, getting an offensive board and score and another basket, bringing the Essex school within 46-40 with 7:12 left in regulation. The Cougars weren’t able to snag the ball after St. Frances miss on the next trip down the court, and Staten dropped a short floater.

“We kept them in the 60s and that was the goal, but we couldn’t overcome the first couple of minutes offensively,” said Cougars coach Trevor Quinn, whose team had three field goals in the opening 12 minutes. “It just took us a while to get going.”

Freshman forward Derik Queen finished with a double-double, 16 points and 10 rebounds, for St. Frances, who will try to become the first team in five decades to win four straight BCL Tournament championships. The last team was Loyola, which claimed crowns in 1975, 1976, 1977 and 1978.

“We got to complete the job,” said Myles. “There’s nothing worse than getting to the championship game, especially with us being 15-0. We have to mentally prepared tomorrow and get locked in.”

The final obstacle for the Panthers will be John Carroll, which continued its March Cinderella-like run with a come-from-behind victory. Tyson Commander scored 20 points for John Carroll (10-5), and Jeannot Basima finished with 19.

Down 14 points in the first half, the Bel Air school overtook the No. 2 seed Cavaliers in the second half, becoming the first No. 6 seed to reach a BCL Tournament finale since 1989. The Patriots are the first non-top four seed to advance to a BCL Tourney final since St. Frances in 2005.

A few weeks ago, John Carroll was 2-5 and searching for answers.

“One of the hardest things is when things aren’t going well how to do you keep your composure, how do you stay together,” said Patriots coach Seth Goldberg. “What our guys showed tonight is they’ve been working on this all season.”

“We came into the season lacking and teams were coming for our necks,” said John Carroll senior guard Jalen Bryant. “We needed a reality check.”

Rock bottom was at a loss to Gilman School, a game the Patriots seemingly had control in the fourth quarter. They haven’t loss since, including a victory at third-seed Mount St. Joseph, ending a streak of 21 straight BCL semifinal appearances.

Down double-digits to the No. 2 seed Cavaliers Wednesday, John Carroll wasn’t fazed.

Commander, who had one field goal in the first half, scored 16 of his 20 points over the final 16 minutes. His 3-pointer, stemming a Spalding charge, put John Carroll up, 59-55, with 3:56 left in regulation.

After a monster dunk by Cavaliers forward Cam Whitmore, the Patriots answered with a Basima basket, followed by a Jaiden Jakubowski’s 3-point dagger, for a 64-57 advantage with 2:38 to play.

“What our guys know is it doesn’t matter who’s on the floor we have confidence,” said Goldberg.

The Cavaliers got the deficit back down a possession on a basket by CJ Scott with 8 seconds left, and Vaughn was fouled with 3.6 seconds to play. Vaughn missed the front end of an one-and-one, but Scott’s heave from about 40 feet hit the back of the iron as time expired.

Spalding had a 26-12 advantage with 2:52 left in the opening half, but the Patriots, behind Basima, suddenly came to life.

Basima scored seven points, including a 3-point play with 1.8 seconds remaining, pulling John Carroll to 26-25 at halftime. Commander made his first basket during the Patriots’ 13-0 close.

John Carroll regained the lead early in the third, 30-28, on Bryant’s basket following a Commander block. The Patriots closed the quarter with an 8-0, including 3-pointers from Commander and Vaughn and Basima following his own miss, for a 47-38 lead.

The Patriots, who hit six 3-pointers in the second half, led 52-43 after Jakubowski’s trifecta, but Spalding made its run. The Severn school went on a 12-4 spurt to pull to 56-55 with 4:30 left in regulation.

The Cavaliers had a chance to tie or take the lead, but missed two free throws. Spalding never got closer than 59-57 after Whitmore’s dunk.

Whitmore, the BCL’s Player of the Year, and Ty Peterson each finished with a game-high 21 points for the Cavaliers. Spalding shot 22-of-35 from the free throw line Wednesday, including six misfires in the final quarter.

It was a bitter end for the Cavaliers, seeking their first BCL Tournament final since 2013.

“We fought hard, but again rebounds, free throws, turnovers…we got to be able to finish,” said Cavaliers coach Josh Pratt. “We got a little frustrated towards the end of the second quarter and it was our mentality. We got to learn from it.”

Two seasons removed from a 5-win season, John Carroll is now a win away from its first BCL tourney crown since 2016 and becoming the first team since 1989 to win the Brother D. John Smith Trophy as a No. 6 seed (Towson Catholic).

The final step will be daunting against undefeated St. Frances, which has won 20 straight BCL decisions (including playoffs). The Panthers have won their nine BCL contests by 24 points, in an abbreviated season due to the COVID-19 pandemic.

“Let’s be real every team is unbelievable and very well coached so our focus going into Friday is us,” said Goldberg, who won two MIAA B title at St. Paul’s School. “Let’s go out, have some fun and see where things go.”

“We’ve been counted out plenty of times,” said Commander. “Now, we’re 32 minutes away from a championship.”