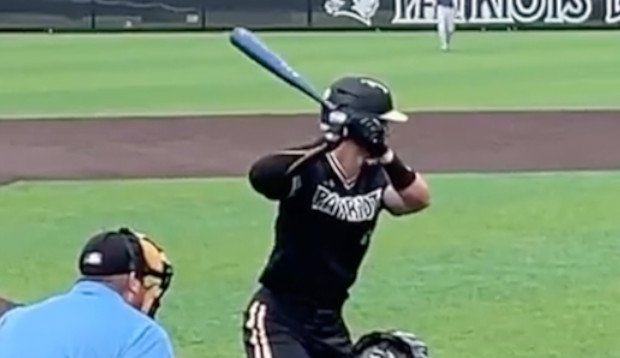 After being held scoreless in a heart-breaking 1-0 loss to top-ranked Archbishop Spalding on Monday, the John Carroll baseball entered the elimination half of the MIAA A Conference double-elimination baseball tournament, Tuesday, and rallies from a four-run deficit to defeat visiting Loyola, 6-5, to stay alive in the tournament while brining an end to the Dons’ season.

Matt Archibald who tossed six shutout innings, with 12 strikeouts, in Monday’s gut-wrenching loss at Spalding, was Tuesday’s hero as he hit a clutch two-run home run in the bottom of the sixth to post the Patriots on top against the Dons.

Loyola broke on top 3-0 and led 5-1 after 3-1/2 innings, but John Carroll got back in the contest with a three-run fourth and again it was Archibald with the big hit, a two-run double. The senior star finished 2-for-3 with a walk, a run scored and four RBI. JC also got an RBI single Ethan Ruiz, in the third, and a run scoring double from Matt Bishop in the third.

Ruiz also came on to pitch 3.1 innings of scoreless relief, allowing just four hits while striking out three, to earn the win.

Joey Benckini had a big day for Loyola (10-13), going 2-for-5 with a home run and three RBI. Dylan Bryan went 2-for-2 with a double and run scored and Trent Waire also had two hits, including a triple, and run scored.

John Carroll (14-11) will now travel to third-seeded Archbishop Curley on Thursday for another elimination battle. The Patriots and Friars split during the regular season.

Nicholas Pratt’s big bat carried the day for Indian Creek, on Wednesday, as he hit two home runs and drove in five runs to lead the Eagles to an 11-1, five inning, win over Friends School in the elimination bracket of the MIAA B Conference double-elimination baseball tournament.

Pratt hit a solo home run in the bottom the first to put Indian Creek on the board and teammate Xavier Quigley launched a two-run home run, later in the inning, to stake ICS to a 3-0 lead. The Eagles then erupted for eight runs in the third, highlighted by a grand slam by Pratt.

Patrick Smith also hit a 3-run home run in the third, while Ben Bucci doubled and scored a run.

Friends (8-12) only run came on a solo home run by Lukas Monaldi-Fisher.

The Eagles (16-10) will travel to St. John’s Catholic Prep on Thursday for another elimination battle.

Leading 5-0 entering the bottom of the fifth, the Vikings scored five times to end the contest.

Junior Josh Skowronski led SJCP with two hits, including a triple, and he drove in four runs. Branden Pershin drove in two runs and scored three times, while Cannon Coleman went the distance on the mound allowing just two hits in the shutout.

The Vikings (15-5) will be back in action on Thursday, hosting Indian Creek in the next round of the elimination bracket. Glenelg Country ended its season at 11-10.