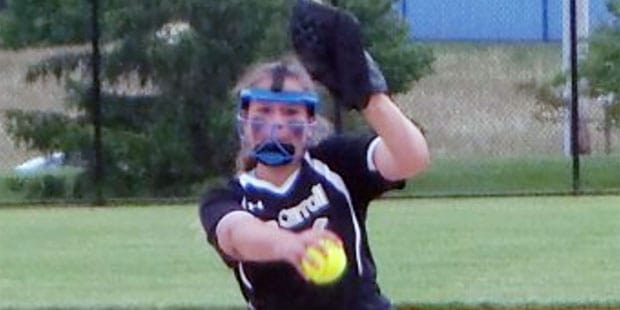 
John Carroll School came into Thursday’s road softball game at top-ranked Bohemia Manor with a three-game losing streak and a surprising 2-6 record.
Suddenly, the Patriots’ season has taken a huge turn for the better as they handed the powerful Eagles their first loss of 2019, winning 5-3.
Bo Manor (9-1), which has been working in two young pitchers behind all-everything ace Maddie Penta, sent Alex Hooper to the circle to make the start and she was touched up for five runs on five hits in four innings, including four runs in the top of the first inning, which carried the Harford County private school (3-6) to the win.
Penta came on in the fifth inning for Bo Manor and pitched the final three innings, striking out all nine batters she faced. Penta also had a big day with the bat, going 2-for-3 with two RBI and run scored.
Emma Kropkowski took advantage of the early offense and pitched a complete game for John Carroll and earned the win. She allowed 11 hits, but walked only one and limited the damage with the use of eight strikeouts.
Junior Emma Ritter when 4-for-4 at the plate for the Patriots and scored two runs. Jules Donnelly, Brianna Botkin and Sarah Spaeth all had RBI doubles for John Carroll and Kate Gromacki also drove home a run.
Pictured above: John Carroll’s Emma Kropkowski pulled off a rare victory over top-ranked Bo Manor, pitching the Patriots to a 5-3 win over the Eagles Thursday.