John Carroll is the first to touch-up MSJ’s Torroella 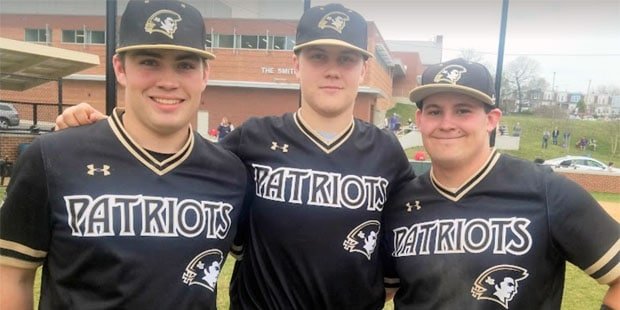 No. 10 Mount St. Joseph has been one of the early surprises of the 2019 baseball season and that is in large part due to the success of the Gaels’ hard-throwing ace John Torroella.

On Monday in Irvington, however, 4th-ranked John Carroll touched-up Torroella for six runs in four innings and the Patriots (10-2, 4-2 MIAA A) toppled the host Gaels, 9-2, in an MIAA A Conference baseball battle.

It was only the second conference loss this season for the Mount (10-2, 5-2 MIAA A). Torroella was coming off a recent no-hit win over No. 2 Archbishop Spalding, but Monday belonged to the Patriots.

John Carroll was lead at the plate by Tyler Blittersdorf, who had three consecutive doubles to three different parts of the field, and Tyler Leach, who had a double and a 3-run home run, as well as four RBI’s. Blitterrsdorf drove in three and he scored two runs.

The Patriots took s 1-0 lead in the top of the first when Blittersdorf whacked the first of his three extra-base hits, and Leach doubled him home.

The Mount answered with a solo homer from slugging catcher Justin Looney in the home half of the first, but JC tallied three times in the top of the second, and then plated two runs on Blittersdorf’s second double in the fourth, and they were never headed after that.

The Pats got a three-run four-bagger from Leach in the 7th to put the game away.

Looney blasted a second home run, off of Hunter Tipton in the sixth, but his solo shots amounted to the only scoring Mount Saint Joe would do on the day.

Tipton went six strong innings to get the win and Brandon Crews closed out the Mount in the seventh.

Tipton said that in the beginning, only his fastball was working, but later in the game his curveball was sharp. 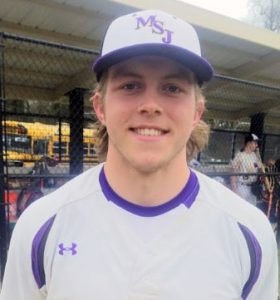 “Looney hit two fast balls that I left in the middle of a plate,” said the senior righty.

“He’s a bulldog, and a competitor and he’s very cerebral. It’s a wonderful combination to have, and today he was firing on all cylinders.”

Sluggers Leach and Blittersdorf said that they were waiting all day on Torroella’s fastball.

“I cleared my head at the plate, and let my bat do the work,” said Blitterdorf. “We were hunting fastballs today, because we knew his curveball was a little off and we were attacking the ball.”

Leach confirmed that the Patriots’ hitters were looking for fastballs early in the count, but also stressed the importance of his team’s effort on defense.

“We didn’t make any errors today,” said Leach. “We played good defense, and the hits came on offense. It was a good team win.”

“We found out today that John (Torroella) is human,” said St. Joe coach Phil Kraska. “He didn’t seem to have as much confidence in himself as he normally does, but he’s a fighter, and he didn’t want to come out. He wanted to stay in, and give us a chance to win.”

Pictured above: (from left) Tyler Leach had a home run for, a double and four RBI’s for John Carroll; Hunter Tipton held MSJ to two runs over six innings; and Tyler Blittersdorf had three doubles and three RBI’s.