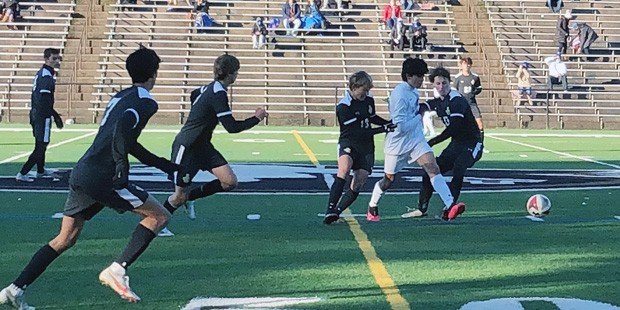 Patriots score three times in dominant opening half of soccer

Halloween is traditionally a day for masks, but not necessarily on the athletic field.

On Saturday morning, at John Carroll School, the host Patriots and visiting Loyola Blakefield were happy to be wearing their face coverings as they prepared to kick-off their long delayed 2020 soccer season. The day was especially exciting for John Carroll, which scored three times in the first half and rolled to a 4-1 victory. 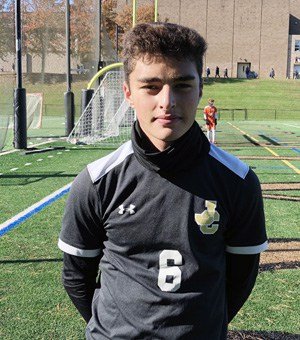 Sophomore Ryan Skandalis put John Carroll on the board first as the Patriots defeated Loyola, 4-1, in the 2020 soccer opener for both schools.

With the MIAA allowing its member schools to compete in an open season this fall, while everyone continues to battle the COVID-19 pandemic, John Carroll and Loyola are two of six MIAA programs that have formed their own Baltimore Catholic circuit just for the 2020 campaign. The other members are Archbishop Curley, Archbishop Spalding, Calvert Hall and Mount St. Joseph. All six schools were in action this weekend.

It was apparent early that John Carroll, a squad with a core group of experienced seniors and a talented group of underclassmen, wanted to apply pressure in the Loyola defensive end, which is brand new after losses to graduation. Just four minutes in, Loyola goalkeeper Jordy Eckman was forced to make a diving deflection on a bullet off the the foot of JC’s Michael Gradus. Five minutes after that, the Patriots struck for the first time.

Sophomore Ryan Skandalis ran onto a loose ball, which had been deflected to the top center of the box by a Loyola defender. Skandalis took one dribble to his right and then simply tapped the low shot inside the left post for a 1-0 John Carroll lead.

“First game of a late postponed season, it feels great to be out here,” said Skandalis. “Historically we have not done well against Loyola, but to finally get out and get the win, we have a bright future ahead. It feels amazing just to be out here playing with the boys and I am excited for the year to come.”

In the 16th minute, John Carroll made it 2-0 when senior Ryan Petty crossed a perfect feed to classmate Davin Clark who one-timed a blast inside the left post. Quickly, the score went to 3-0, in the 21st minute, on another defensive lapse by Loyola.

The play started with a free kick from midfield by John Carroll junior Eric Schultz, who hit a high arching ball that landed in the box, behind the Loyola defense. JC’s Chase Vogel got to it first and nudged it out to Christian Rugel, on the left, and he returned it with authority in the right upper 90.

The score remained 3-0 through intermission and, when the second half got underway, Loyola put a couple of strong offensive surges together for the first time in the contest. Those initial pushes did not bare fruit, but Loyola did finally break through in 20th minute, in an unusual manner.

Loyola junior Matius DeJesus drove a free kick from midfield all the way down to the goal line where John Carroll keeper Ethan Wagner gathered, rather uneventfully, above his head. According to the official, however, Wagner let the ball travel beyond the goal line while in his grasp, thus creating a goal for DeJesus.

The Dons, however, could not generate any momentum from the play and the Patriots took a big step towards icing the victory, with 15 minutes left, when Gradus made and excellent charge for the Patriots’ fourth goal. Dribbling up the center of field, locked in battle with a pair of Loyola defenders, Gradus moved to right side of the box and muscled off a hard left-footed shot that ripped past Eckman for a 4-1 John Carroll lead.

Loyola’s final chance to get back into the contest failed when junior Kwaku Marfo-Sarbeng sent a penalty kick shot wide left.

John Carroll coach Jimmy Fendryk, now in his 11th season with the Patriots, was excited to see the season get underway.

“I think everybody’s been itching for this to begin,” said Fendryk. “There were questions of whether we were going to be able to start, but everybody is in the same position now where we are just happy to be back out playing.”

Fendryk is also excited with the evolution of his team.

“We’ve been doing a good amount of work up here to shift the competitiveness and shift the mentality and shift where our program can go,” said Fendryk. “I think we’re getting to that point where we are really ready to compete with some of the big traditional powerhouses.”

Despite the opening game setback, Loyola coach Lee Tschantret, is glad to be underway in 2020.

“It feels great to be back out on the field,” said Tschantret. “I think that result was a little bit on me. As a coach I was a little more focused on training and didn’t have any preseason games for our guys. It was such a short preseason and, in that first half, some of those mistakes that happened, were, honestly, just being out there for the first time. To John Carroll’s credit they capitalized on our mistakes.

“Replacing an entire back line is a little bit difficult, but we’re all in the same boat as coaches. It is what it is and you make do with what you have.”