Patriots come from behind to edge Curley, 27-24

by Gary Adornato
In a contest in never led, until it won it, John Carroll came from behind, Friday evening in Bel Air, to defeat Archbishop Curley, 27-24, in match-up of two teams heading to the MIAA B Conference football playoffs next week.

With the victory, which came on a dramatic 15-yard touchdown pass from Austin Brinkman to Caleb Atabong in the overtime, the Patriots earned the third seed for the B Conference playoffs and delivered the 100th career win for head coach Ken Brinkman.
The Patriots will travel to Annapolis next Friday to face two-time defending champion St. Mary’s, the second seed, while Curley will travel to Laurel to face top-seeded St. Vincent Pallotti in the other semifinal match-up.
Atabong was truly a hero for the Patriots as he also scored on a 13-yard run, with 6:09 left in the fourth quarter, to tie the contest at 21-21. After that score both teams punted before Curley had one final chance to win the game in regulation as it drove from its own 28 to the John Carroll 35 in the final 2 minutes, 55 seconds, but a delay game penalty and some poor clock management prevented the Friars from getting close enough for a potential game winning field goal.
“It was a back and forth game,” said Curley coach Brendan Ireton. “We had a lot of momentum going early on. They seemed to get it towards the end of the half and kept it going for much of the second half. We weren’t able to capitalize on some chances we had and that falls on me.”
Curley had the ball first in overtime and settled for a 21-yard field goal by Knapp. John Carroll went backwards on its first overtime snap as Curley linebacker Ronald Clark dropped Roman Hemby for a 5-yard loss. On second down, however, Atabong ran a curl rout into the left seam and Brinkman hit him at the two before Atabong powered through a tackle and into the end zone for the winning score.
Coach Brinkman said his staff spotted something earlier in the game that led to the call on the game-winning score.
“That’s a very good offense; a lot of good backs, a good quarterback,” said Brinkman of the Friars. “To hold them to a field goal was huge for us. We tried to run and lost yards. We saw an opening. We saw it earlier in the game. That was a perfect opportunity. Our coaching staff all saw it and said it was time to go to it and we called it.”
Curley dominated the first quarter, driving 60 yards on its first possession and getting a 13-yard touchdown run by Clark. On the first play of its second possession, the Friars scored on a 61-yard pass from quarterback Kofi Kwaw to John Munk for 14-0.
Hemby got John Carroll on the scoreboard for the first time, in the second quarter, with a 41-yard run. The Patriots then tied the game for the first time, on the first possession of the third quarter, driving 79 yards in 12 plays with Hemby scoring again. This time on a 5-yard run.
Following that score Curley drove to the John Carroll 11 and faced a fourth down snap on the first play of the fourth quarter. As Kwaw was still barking out instructions he was surprised by what appeared to be an early snap which resulted in a fumble. Kwaw dove on it, but the Friars still turned the ball over on downs and lost an opportunity for points. Curley, however, forced a quick punt and then took the lead again on a 61-yard TD run by senior Julian Howard.
The lead did not last long.
Starting at its own 19, John Carroll got a big third down scramble by Brinkman to keep the drive going. Hemby then ran for 15 yards and had 15-yards tacked on for a personal foul by Curley. Atabong then scooted 24 yards into the red zone, before following with his 13-yard touchdown run. Adding to the drama was the fact that Gavin Greene’s game-tying extra point kick was partially blocked, but still had enough juice to flutter through the uprights.
With John Carroll will go into the post-season on a high, Ireton said his team needs to understand that still has a great opportunity ahead. 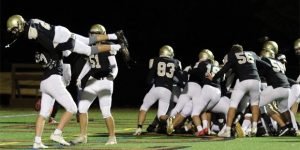 “We’re both in the playoffs so I am just thankful we have another week to go and keep playing,” said Ireton. “Anything can happen in the playoffs and that’s what the message has got to be. We just have to get back to work on Monday, watch film and get ready for Pallotti.”
Brinkman was emotional in his post-game interview. In his second year as the head coach of the Patriots, he had a very successful 13-year career as the head coach at North Harford High School. Adding to the special nature of this milestone victory was the fact that it came while coaching his son Austin, the team’s quarterback.
“It feels great,” said Brinkman before his voice cracked and tears filled his eyes. “To be back at it. I had a long career at North Harford. To be able to be fortunate enough to come here to John Carroll — a great school, a great environment, great support. And, to be able to coach my son, it means a lot on senior night.”
As far as his team’s semifinal match-up with St. Mary’s, Brinkman believes his team is up to the challenge.
“We played them two weeks ago and played a great game, 28-21. They are a very talented football team. We spotted them 14 points, similar to tonight. We need to come out and play a complete football game against them.”
Pictured above: John Carroll head coach Ken Brinkman gets a huge hug from his son Austin, the Patriots quarterback who delivered the game-winning touchdown throw in overtime to secure his dad’s 100th career win. (Photo courtesy of Kim Kreider Muhlenfeld.
JOHN CARROLL 27, ARCHBISHOP CURLEY 24, OT
AC 14 0 0 7 – 3 — 24
JC 0 7 7 7 – 6 — 27
1STQ
AC – Ronald Clark 13 run (Josh Knapp kick)
AC – John Munk 61 pass from Kofi Kwaw (Knapp kick)
2NDQ
JC – Marcus Hemby 41 run (Gavin Green kick)
3RDQ
JC – Hemby 5 run (Green kick)
4THQ
AC – Julian Howard 61 run (Knapp kick)
JC – Caleb Atabong 15 run (Green kick)
OT
AC – Knapp 21 FG
JC – Atabong 15 pass from Austin Brinkman (no try)