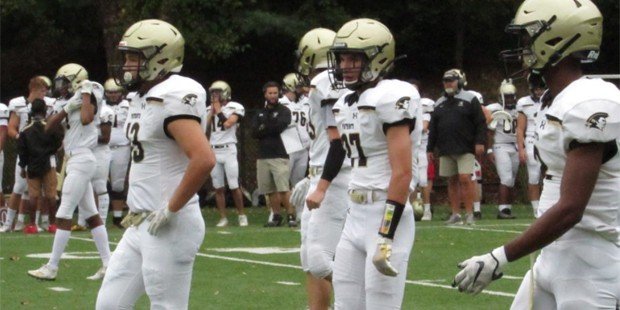 Pallotti and St. Mary’s locked in as the top two seeds

With one week to go in the MIAA B Conference football regular season, the suspense has been settled as to who will be in the league playoffs, the weekend of Nov. 8-9. All that remains to be settled are the exact match-ups for the semifinals.

With victories on Friday, Archbishop Curley and John Carroll officials clinched their post-season spots, as each team improved to 5-2 in conference play. Curley clinched with a 15-13 win over Concordia Prep, which eliminated the Saints, and John Carroll routed Annapolis Area Christian, 38-0. The Friars (7-2 overall) and Patriots (5-3 overall) will meet on Friday at John Carroll, in their respective regular season finales, to determine which club finishes with the third seed.

St. Vincent Pallotti (8-1 overall/7-0 MIAA B), which rolled to a 40-0 win over Boys’ Latin on Friday, has clinched the top seed and will host the Curley/John Carroll loser in the semifinals, after closing its regular season at Concordia Prep. Two time defending champion St. Mary’s (6-3 overall, 6-1 MIAA B), which will close its regular season next Saturday with its traditional rivalry game at Severn, will be the second seed and host the Curley/John Carroll winner in the semifinals. St. Mary’s claimed a 41-7 road win over St. Paul’s on Friday.

The MIAA B Conference Championship Game will be played at Archbishop Spalding High School on Saturday, Nov. 16th at 3:00 p.m.

Pallotti and St. Mary’s locked in as the top two seeds