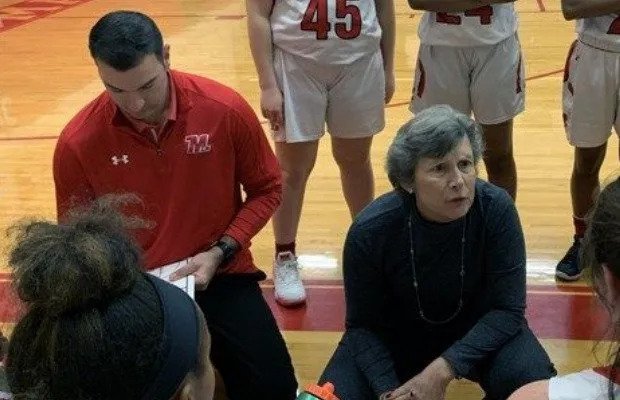 As Mary Ella Marion celebrated Mercy’s IAAM B Conference basketball championship in February, the long-time coach hadn’t decided whether to return for another season with the Magic.

She will retire as Dean of Students at her alma mater in June, but she wasn’t quite sure that she also wanted to end her Mercy coaching career that began almost 40 years ago. After thinking about it for a while, she felt the timing was right.

“It’s just time to make a clean break,” Marion said. “I consulted with some folks including my daughter (Maggie, who played for Marion at Mercy), and it just all came down to this was the way to go.

“I always felt like this basketball program was my baby, so it’s time for the mother to let the baby go. The baby’s grown up. The baby’s in a good place. The program is in a good position with George (Panageotou) stepping in. It’s going to be awesome. It’s just the right time.”

Panageoutou, who led Perry Hall’s boys basketball team to Class 4A state championships in 2017 and 2018, has assisted Marion for the past four years and takes over the program.

Marion, who first stepped on the Mercy campus in 1972 as a basketball-playing freshman, started coaching the Magic in 1983 and leaves the program with a career coaching record of 426-348. She is one of only a dozen Baltimore-area coaches with 400 or more wins.

“She’s going to be missed here, not just as a coach but just her presence,” said Mercy athletic director Nick Gill. “She is Mercy High School in my opinion and a lot of people’s opinion and that’s a thing that’s not ever going to be replaced. I’m going to miss her and she’s going to leave a lasting impact on this school and I’m just so happy for her that all her hard work she put in as a coach came to fruition this year and she was able to coach our team to one of the best years in Mercy history.”

In addition to this winter’s IAAM B Conference title, Marion won two Catholic League championships early in her career. When the Catholic League folded into the IAAM in 1999, the Magic remained a contender for the next decade.

In 2013, Marion switched from athletic director to dean of students and stopped coaching to focus on the new position Four years later, Gill brought her back to stabilize a floundering program. Her second year back, 2019-20, the Magic posted its first winning record in more than a decade.

This winter, the Magic went 22-1 and won their first IAAM title. It was also the first time one of Marion’s teams finished unbeaten in conference play. She was named the IAAM Basketball Coach of the Year.

Those accomplishments made “a storybook end to her career,” said Panageotou, who called Marion a living legend.

Next season, Mercy will step back into the A Conference and Panageotou said he and the Magic, who return all but one player, are ready.

“I look forward to it. I’ve seen how it works the past four years. I’ve seen how she does things, and we’ve turned it around. We’ve got kids that can play and then when you win, other kids want to be a part of it. That’s the exciting part. I know it’s going to be a big challenge, but I look forward to that. I want to play against the best teams in the area… I feel good about where we’re going,” said Panageotou, whose wife Tricia (Henry) played for Marion, will have two daughters on the team next season, senior Lauren and freshman Emma.

Marion said she will be happy to continue to help the program any way she can off the court. She has no particular plans yet for her retirement other than to sleep past 5:30 in the morning.

When she looks back on her Mercy coaching career, it’s hard for her to pick one highlight.

She notes the 1987 Catholic League championship team with Rosemary Kosiorek that played in the Fuel Fund game against Baltimore City champion Walbrook at the old Civic Center (now Royal Farms Arena). She will remember all of Mercy’s games against IND in “The Game” which lasted for 54 years until IND closed its doors in June 2020. Mercy won 30 of those rivalry games, most of which were played on college campuses before 3,000 to 5,000 fans — the biggest draw of any Baltimore high school girls sporting event.

“And this year’s a highlight,” Marion said.” None of my teams have ever gone undefeated in league play and to end up 22-1 is ridiculous and it’s hard to comprehend. The closest that I got to that was the 25-3 season (in 1987).”

For Marion, who has been a part of Mercy for 50 years as a student, three-sport athlete, teacher, coach and administrator, it will be bittersweet to walk away.

“It’s been very humbling to hear and to see responses from different people of my retirement and, this is going to sound funny but, I’m not dead to hear it,” she said with a laugh. “I’m very honored that what I’ve been able to do has touched so many people. There’s some kind of satisfaction that I have because almost anything anybody has asked me to do at Mercy, I’ve said, ‘Yes.’ And there’s some satisfaction that I have given my heart and soul, sweat and tears to this place and now I need to see what life is like outside of Mercy.”

Pictured above: Mary Ella Marion makes a point to her team during a timeout earlier this year. Her assistant George Panageotou (left), who won three state championships as the boys head coach at Perry Hall, will take the helm of the Mercy program as it returns to the IAAM A Conference next season.