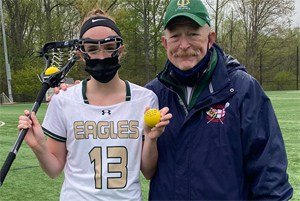 Indian Creek improved to 5-0 on the season and they are in first place in the IAAM C Conference.