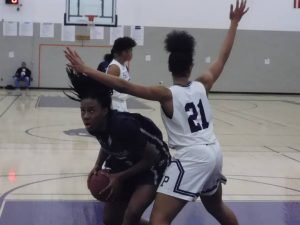 IND’s Ajae Perry (left) tries to get around Pikesville’s Charia Roberts during the first half of Saturday’s girls basketball contest at the Public vs. Private Challenge. The Penguins defeated the sixth-ranked Panthers, 71-64, at Pikesville.

Saturday’s games were originally scheduled for Jan. 12 at McDonogh School, but was postponed because of snow.

Mount Carmel lost to No. 7 Mount de Sales Academy in a battle for first in the IAAM B Conference. Sydney Faulcon led Old Mill (13-3) with 17.

Three makeups are scheduled in the coming weeks. On Feb. 4 at Pikesville, No. 2 St. Frances plays No. 11 Western and Pikesville takes on National Christian Academy.