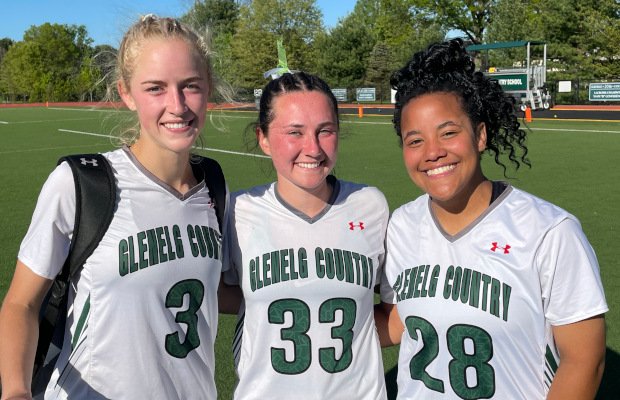 Seniors Maggie Weisman (left), Neve O’Ferrell and Cydney Lisk helped No. 1 Glenelg Country School win its 14th straight game Tuesday and secure the program’s first berth in the IAAM A Conference lacrosse championship game with a 17-5 win over No. 5 Bryn Mawr in a semifinal in Ellicott City. Weisman, selected to play in the Under Armour All-America Game, scored five goals and had seven draw controls. O’Ferrall and Lisk led a defense that held an opponent to five or fewer goals for the ninth time this season.

It’s been a season of firsts for Glenelg Country School’s girls lacrosse.

And now, first trip to the A Conference championship game.

Tuesday, the No. 1 Dragons scored three goals in the first three-and-a-half minutes and never let up en route to a 17-5 semifinal victory over No. 5 Bryn Mawr School, the fourth seed.

The Dragons (17-1 overall) will meet No. 2 and defending champion St Paul’s School at 7 p.m. Friday at USA Lacrosse’s Tierney Field in Sparks to see if they can add A Conference champion to that list of firsts. In the past two tournaments, the Dragons have lost to the Gators in the semifinals.

A stellar team game has been the hallmark of this Glenelg Country season. There are no weak links and the Dragons, who have 11 seniors, were determined to make their best season last as long as possible.

“We’ve all grown up playing together, so we didn’t want it to be our last time playing together. We want to make every moment count so we never have to leave,” said senior defender Neve O’Ferrall with a laugh.

The Dragons, ranked No. 1 in the Nike/USA Lacrosse High School Girls National Top 25, won 13-of-23 draws but Bryn Mawr’s Merrill Watson won the first one. Kaitlyn Sevier took the first shot, but Glenelg goalie Stephanie Marszal saved it and the Dragons took off on their opening run.

Kate Fuhrman found Jaclyn Marszal for the first goal before Maggie Weisman raced through the middle to score and Regan Byrne slipped in a low shot for a 3-0 lead just 3 minutes, 28 seconds into the game.

The Mawrtians (12-5) cut the lead to two with Hannah Johnson’s goal from Anna Wilson with 19:29 to go, but Fuhrman got that back 29 seconds later. She came around the crease uncovered and Lena Doreen hit her with a perfect pass for the quick goal.

That goal kicked off an 8-1 run to finish the half. At one point, the Dragons scored three goals in less than two minutes.

“Hats off to Glenelg. They’ve got one amazing, amazing team and they’re very impressive,” said Bryn Mawr coach Molly Wolf. “From the first draw, the tone was set for them and I think we came out a little flat. They just got hit after hit against us. They’re very impressive.”

The Mawrtians struggled to keep up with the Dragons’ exceptionally quick ball movement. Jaclyn Marszal and Fuhrman directed the offense from behind the cage and combined for seven assists, but Glenelg attacked from all over in the set offense and in transition. Seven Dragons scored, led by Regan Byrne’s six goals and Weisman’s five.

Despite leading 11-2 at the half, the Dragons made sure to keep the pressure on. Jaclyn Marszal fed Regan Bryne 26 seconds after the break for a 10-goal lead and a running clock that would last the rest of the game.

The defense held the Mawrtians without a shot for almost 12 minutes as they turned the ball over four times. The Dragons boosted the lead to 14-2 when Doreen intercepted the clear to score one-on-one with Bryn Mawr goalie JJ Suriano, who finished with nine saves.

The Glenelg Country defense of Neve O’Ferrall, Cydney Lisk, Hannah Glawe, Ashley Dyer and goalie Stephanie Marszal, who had seven saves, held a team to five goals or less for the ninth time this spring.

“I think it was just a team effort, team defense,” said Lisk. “I know coming into this game, our goal was just to play our kind of defense, our team defense as a whole. And if we just stick together, communicate — which is obviously the main goal of our defense — we would be really good at … getting the ball back like we did.”

For the Mawrtians, who posted their best record in a decade and are ranked No. 12 in the USA Lacrosse national poll, the loss was a heartbreaker but, to Wolf, perhaps the start of something bigger.

“I told them, ‘Keep your heads high. You’ve got so much to be proud of,’” said Wolf, a former Mawrtians goalie. “We’ve got 10 seniors that really led the way for us and set the foundation for the next few years. It’s my first year coaching at Bryn Mawr and the sky’s the limit for these kids. They really gave it their all this season.”

The Dragons will now prepare for the showdown with the defending champs Friday night. St. Paul’s defeated No. 3 McDonogh, 13-7, in Tuesday’s other semifinal. The Gators only loss this season has been to the Dragons, 20-7 two weeks ago.

“Yes, we did beat them, but this is a whole new game, it’s a whole new mindset, whole new place,” she said. “They’re coming out angry. They’re mad. We took their (No. 1) spot and they want that spot back, so they want to get that crown.”