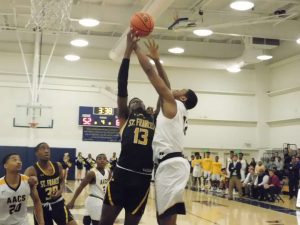 St. Frances’ Jason Murphy (13) and Annapolis Area Christian’s Aaron Celcius battle for a rebound during the second half of Friday’s MIAA A Conference boys basketball match. The No. 2 Panthers pulled away from the ninth-ranked Eagles for a 73-58 decision in Anne Arundel County.

When Annapolis Area Christian School pulled to within two points of St. Frances Academy in Friday night’s MIAA A Conference basketball contest, the huge Eagle home audience immediately perked up, sensing an opportunity at a signature victory was in its grasp.

Then, it was gone. The second-ranked Panthers succinctly cut off any upset notion, posting a 73-58 victory in Odenton. Junior guard Adrian Baldwin led four double-digit scorers with 13 points for St. Frances (15-3 overall, 4-1 MIAA A).

“We just turned it up,” said St. Frances junior post Jamal West. “We don’t feed into the crowd.”

Leading 46-38 midway in the third, St. Frances’ advantage was sliced to a basket after back-to-back 3-pointers by Annapolis Area Christian senior guard Dylin Borden. The Panthers quickly got the ball inside to West, who was fouled shooting and converted two free throws.

West, who helped Dunbar to the Class 1A state title last season, blocked Makhai Hopkins’ putback attempt off an Aaron Celsius save off a long inbound pass, leading to an Alexander score for St. Frances. The Panthers turned AACS over near midcourt, and Baldwin finished with a 3-point play.

“We fight through adversity,” said Alexander, a 5-foot-10 freshman guard who’s been arguably the Panthers’ top bench performer so far this season.

Myles was concerned about Annapolis Area Christian, which has a senior-laden roster from last season’s initial trek in the MIAA A. The Panthers routed the Eagles, 85-54, on East Chase Street, a year ago.

Trailing 11-4 early, Annapolis Area Christian stormed back, claiming a 27-22 advantage after Ray Ritter’s 3-pointer with 2:45 left before halftime. St. Frances calmly responded with a 13-2 run, six in the final 21 seconds for a 35-29 halftime advantage.

“Defense is our best attribute,” said Myles. “I think we have good nights and bad nights shooting, but when you play defense the way we do, you can be in every game.”

Annapolis Area Christian (10-2, 5-2 MIAA A) was briefly able to get the deficit under double digits after St. Frances’ 10-0 third quarter surge. The Eagles, who got 14 points from senior RJ Forbes and 12 from Celcis, have made significant strides since last season and are in position to challenge for a MIAA A postseason berth.

Annapolis Area Christian coach Doug Scheidt has been pleased with the improvement, but was disappointed Friday with his team’s composure in an emotion-filled final period.

“We needed to stay close the whole time and we didn’t,” said Scheidt, whose team’s 10-game win streak was snapped. “I didn’t respond well as a coach. I let the emotion of the moment get to me and it’s on me.”

The Panthers are back in action Saturday evening against defending District champ Wilson, ranked 4th in the District region by the Washington Post, in the showcase match of the Baltimore Hoops Festival at St. Frances’ Phelps Gym. The event features several VSN Top 20 squads including No. 4 Patterson (vs. Calvert Hall College), No. 6 Boys’ Latin School (vs. Florida’s Farragut Academy), No. 10 McDonogh School (vs. City College) and No. 14 Gerstell Academy taking 17th-ranked Edmondson in the opening match Saturday morning. 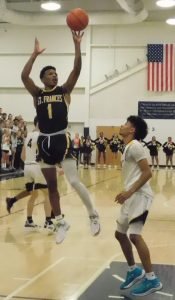 After taking on Tennessee’s Memphis East and the nation’s No. 1 senior in 7-foot James Wiseman in South Carolina last week, St. Frances will be ready for Wilson, led by University of Maryland recruits Mahki and Mahkel Mitchell and Boston College-bound guard Jay Heath.