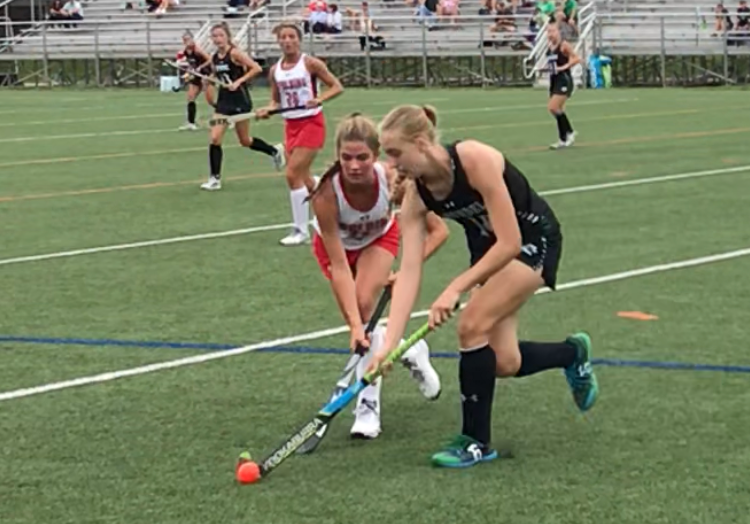 Archbishop Spalding’s Ally Keith (white) and Arundel’s Aly Dinmore battle for the ball during Thursday’s field hockey contest. The fourth-ranked Cavaliers posted a 5-1 victory over the the No. 5 Wildcats in a showdown of Anne Arundel County programs at Love Field in Severn.

by Katherine Dunn
In the first game of the season, Archbishop Spalding’s No. 4 field hockey team didn’t take long to show off its quick-scoring potential.
The Cavaliers needed only 50 seconds to score their first goal and they went on to dominate No. 5 Arundel, 5-1, in the private school-public school showdown between the Anne Arundel County teams.
In the first meeting between the two since a 2-2 draw in 2019, Becca Lawn scored twice and Ally Keith, Bridget Donovan and Jilly Lawn each added a goal for the host Cavaliers. Katie Fichtner had two assists.
A senior center back, Becca Lawn’s primary role this fall is defense, but with many of the Cavaliers still young, she moved up to attack on penalty corners. She also scored on a penalty stroke early in the fourth quarter for the Cavaliers’ final goal.
Lawn, who will play at Miami of Ohio next fall, said it’s always great to have so many players who can score rather than relying on just one or two.
“That really shows how versatile your offense is and how everybody who’s getting in is getting quality touches and getting shots on goal,” she said. “It’s nice. It relieves the pressure on defense 100 percent, because you trust the forwards and you know they’re going to score.”
Cavaliers coach Leslee Brady said her core of veterans — Becca Lawn, Fichtner, Donovan and Keith — will be especially critical with young units on offense and defense. They showed just how well they can lead their younger teammates against Arundel.
“They are controlling the middle of the field,” Brady said. “I would love to play Becca up higher, but we need her to manage and command that defensive unit and she’s doing a great job. She’s got two freshmen on either side of her, but it’s working.”
The Wildcats kept it close for a half but had trouble containing the Cavaliers who often moved the ball down field quickly and then fired multiple shots. Arundel goalie Savannah Brooks was credited with 26 saves against 33 Spalding shots on goal.
The Cavaliers scored their first goal on a fast break when Keith took a pass from Donovan and fired it low to Brooks’ left.
Brooks held off the Cavaliers with a couple of saves before the Wildcats tied the game on a penalty corner. Stellar midfielder Lana Hamilton, who is headed to Syracuse, sent a pass to Aly Dinmore for a shot near the top of the circle that evened the game at 1-1 with 5:34 left in the first quarter.
The tie didn’t last long.
Freshman Jilly Lawn, Becca’s sister, gave Spalding the lead for good, 2-1, on a penalty corner with 3:25 left in the quarter.
Despite excellent ball movement from Hamilton and a strong defensive showing from Dinmore, the Wildcats (0-1) struggled against the core of Spalding’s strength.
“We’re very young,” said Arundel coach Carrie Vosburg, who said she thought her team was a bit overrated in the preseason polls. “We graduated seven seniors that were a big part of our starting lineup last year… Yeah, we have a player going to Syracuse, but we need 10 other people to step up… We also only had one scrimmage and we have a lot of kids who just need that game experience.”
This was the second big showdown between IAAM A Conference and Anne Arundel County public schools teams within a week. In a No. 1 vs. No. 2 showdown Friday night, Severna Park upset Garrison Forest, 2-1, to move up to the top spot in the VSN Top 20.
The Cavaliers (1-0) host Garrison Oct. 7 in a rematch of the 2019 A Conference championship game as they aim to avenge the 1-0 loss. That was the last time Spalding and the Grizzlies met, because the IAAM did not have a fall season in 2020.

Becca Lawn got her senior season off the right foot Thursday for Spalding. The University of Miami-Ohio recruit had two goals in the Cavaliers’ victory.

“Every year we do want to go to the championship and win the conference,” Becca Lawn said, “but we have six freshmen on varsity this year and there are young sophomores and juniors in terms of coming on to varsity, so were really trying to grow this team for the next couple years and to really just show them what Spalding hockey is and try to get back to the championship and keep being competitive in the conference. Really it is a growing year, but I think, at the same time, we’re very strong.”
No. 4 ARCHBISHOP SPALDING 5, No. 5 ARUNDEL 1
ARUNDEL  1 0 0 0 — 1
SPALDING   2 0 2 1 — 5
GOALS: A —Ally Dinsmore; SP—Becca Lawn 2, Ally Keith, Jilly Lawn, Bridget Donovan.
ASSISTS: A—Lana Hamilton; SP—Katie Fichtner 2, Bridget Donovan.
SAVES: A — Savannah Brooks 26; SP — Ruby DeFrees 6.