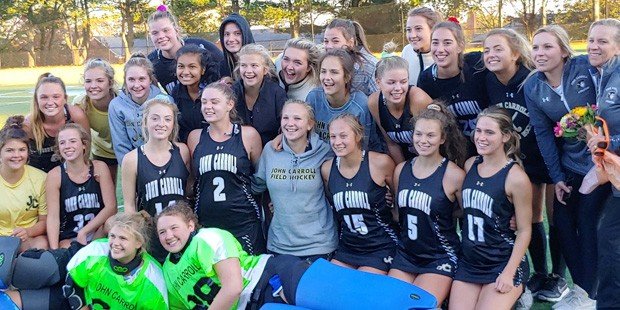 Patriots knock off three ranked teams to win title and move to No. 9; Liberty takes over at No. 1; Old Mill, Marriotts Ridge and North East also join the rankings

This late in the season Top 20 polls do not usually see much movement, but the latest VSN Field Hockey Top 20 sure had some moving and shaking going on.

For starters, undefeated Liberty, which is two wins away from an undefeated season and a 1A state crown, has taken over has the new No. 1 team. The Lions moved up from No. 2 after previously top-ranked Archbishop Spalding fell in the IAAM A title game to then No. 4 Garrison Forest.

The champion Grizzlies, which opened the year at No. 1 are now back up to No. 2, while Spalding is No. 3. Severna Park, gunning for another 4A state championship this week moved up one spot to No. 4 and McDonogh slid back two places to round out the Top 5 at No. 5.

The biggest mover this week is John Carroll. The Patriots, ranked earlier this year, roared back into the poll with three playoff wins over ranked opponents to capture the IAAM B Conference title. JC is now ranked No. 9.

Three other teams, making strong playoff pushes, are also new to the rankings this week. They are No. 14 Old Mill, No. 19 Marriotts Ridge and No. 20t North East are all in this week’s Top 20.

This week: vs. Patuxent, 1A State Semifinals, at Paint Branch, Nov. 7

This week: vs. Old Mill, 4A State Semifinals, at Broadneck, Nov. 6

Last week: lost to then No. 4 Garrison Forest, 1-0, IAAM A Semifinals

This week: vs. No. 19 Marriotts Ridge, 2A Field Hockey State Semifinals, Nov. 7

This week: vs. Quince Orchard, 4A State Semifinals, Nov. 6

This week: Season Complete, 4A East Region I Finalists

This week: vs. Washington, 1A State Semifinals, at Paint Branch, Nov. 7