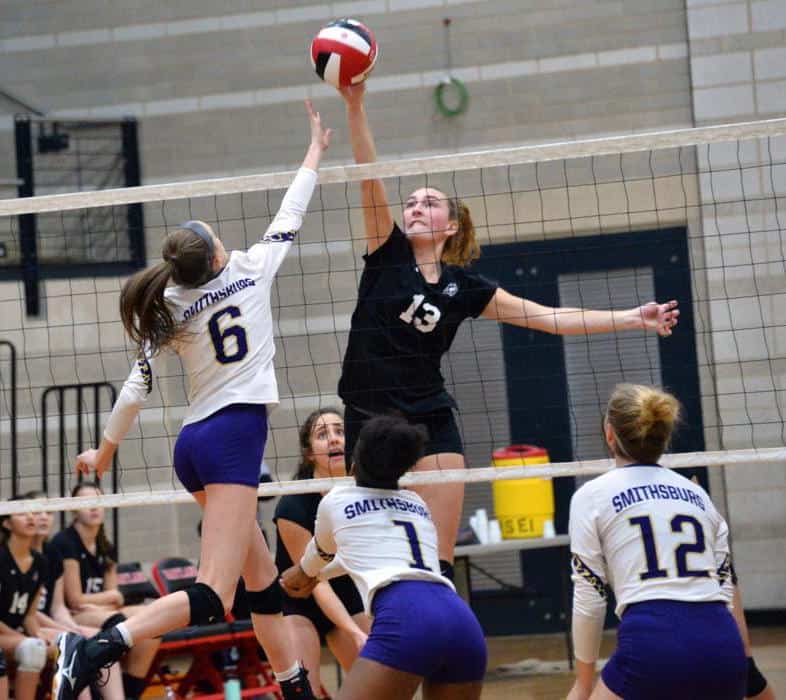 Patterson Mill’s Delaney Madsen (13) goes up for a shot against Smithsburg’s Kylie Snyder during Saturday’s Class 1A state volleyball title match at the University of Maryland’s Ritchie Coliseum. Despite playing well after a rough first set, the Huskies were swept by Smithsburg.

With only one prior state final four appearance, Patterson Mill High had a huge disadvantage in experience against perennial Class 1A power Smithsburg going into Saturday’s 1A state title game at the University of Maryland. The Washington County rolled the Huskies in the first two sets and was on the cusp of a three-game sweep.

The Harford County school got off the proverbial mat, sitting a point away from extending the match. But the Leopards rallied for a dramatic 29-27 victory for the sweep (25-13, 25-19) and another state championship.

“I’m so very, very proud of all these girls,” said Patterson Mill assistant coach Brandon Jones, who handled the post game media session for the Huskies in place of bashful head coach Lucia Samra. “They came in here and played very well. I think they were a little nervous first set, but they started to get their confidence in the second set and they really thought they were going to win that third set.”

The Leopards entered the postseason with a losing mark (7-8). Smithsburg coasted through in the opening two sets, but Patterson Mill (12-6) played respectably in the second set.

The Bel Air school owned a 24-22 lead with senior outside hitter Katie Keech serving, but the Leopards forced a sideout. The teams tied at 24- , 25-, 26- and 27-all before Smithsburg got the last two points on a service error from Cailey Jones then a kill from senior middle Morgan Domenico.

“I think the first set we were really nervous, we just had to get all that out,” said Delaney Madsen. “We got to play better in the second and third sets, just didn’t play hard enough.”

Keech led the Huskies with 10 kills, 20 digs and 11 points. Madsen, a junior outside hitter, added six kills and two blocks.

Madsen, Keech, Mikaela Truing (five kills), Cailey Jones (four) and setter Meadow Santoriello are scheduled to be back next fall.

“We really played our hearts out, I mean we really did,” Keech said. “I’m very thankful for the team and how we played today. We had a lot of energy and we looked good. We lost, but we looked good as a team.”