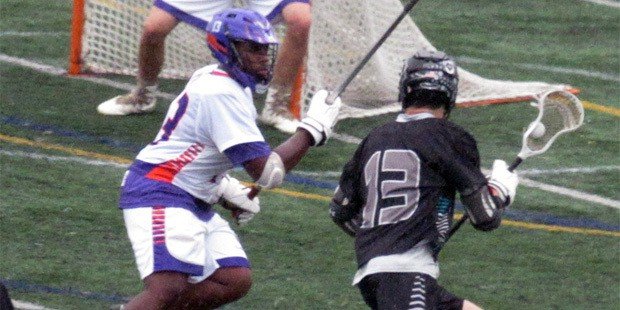 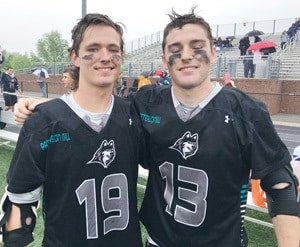 Blake Tallon (left) and Connor Madsen were two of the stars in Patterson Mill’s win over McDonough in the 1A state semifinals.

Patterson Mill dominated every aspect of its 1A boys’ lacrosse state semifinal pairing with McDonough of Charles County, in the rain on Saturday at Havre de Grace High School, rolling to a 17-4 trouncing of the Rams and gaining a place, opposite Smithsburg of Frederick County, in Tuesday’s state title game (6:00 p.m.) at Stevenson University.

The Huskies (12-6) had the ball in their own offensive end for all but 30-seconds of the first quarter as Connor Madsen won six of seven face-offs and Patterson Mill scored seven unanswered goals in the quarter.

In the second quarter, Huskies’ coach Jason Bellamy already began going to his second and third units as his squad scored five more goals and led 12-1 at the half. In high school boys’ lacrosse a running clock is turned on when one team leads by 12 or more goals and Patterson Mill reached that point at the 9:59 mark of the third quarter when Travis Karwatka buried a feed from Madsen.

From there, the clock and the Huskies continued to roll.

“We got off to a good start,” said Madsen. “That always helps and I think that continued throughout the game. We need to keep playing as a team. We’re hot right now. We just have to keep our foot on the gas pedal.”

“We just tried to move the ball and get easy one-on-ones, finish early and keep it going,” said Tallon. “We need to stay focused and have a couple of good days of practice.”

In addition, Tom Nicosia scored twice, Matt Gallagher and Kevin Dyke each had a goal and an assist, and Kevin Shao, Zac Haskell and Jakob Lowery all had one goal.

“Our conference is pretty tough,” said Bellamy. “It prepared us for the playoff season. We talked about how battle tested I think we are. We’ve been challenged. From the face-off X to ground balls, the offensive end of the field possessing the ball, and the defense playing real good as a group of seven back there communicating, I think we did real well today.”

Bellamy also discussed the challenge of preparing for Smithsburg in the state final.

“Smithsburg is a talented, talented team with some players on both ends of the field who can really play the game,” added Bellamy. “Our guys, we’ll spend time preparing. They’ll do the homework. We’ll put together a game plan on Monday and we’ll be ready to compete for sure.”

Brady Ferriter and Seth Yates each scored two goals to account for the McDonough scoring. The Rams finished their season at 10-8.

Pictured above: Patterson Mill’s Connor Madsen (right) works around the edge against McDonough’s Nick George. Madsen had two goals and three assists and won 6-0f-7 draws to help the Huskies reach the 1A state final.