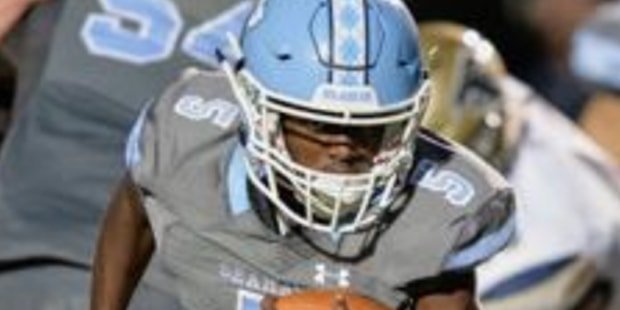 Seahawks battle from behind to defeat Broadneck, 48-41

Trailing 33-21 at the half No. 9 South River limited Broadneck’s high-powered offense to just one second half scoring drive as the Seahawks rallied for a 48-41 Anne Arundel County victory, keeping themselves undefeated and in first place in the County.
Senior quarterback Dave Faust threw for three scores in the game, including two in the third quarter to lead the thrust. Junior Delvin Johnson started the second half surge with a 67-yard touchdown run as the Seahawks outscored the Bruins 20-0 in the quarter. Johnson ran 26 times in the contest for 232 yard and two scores.
The second half offset a huge night for Broadneck sophomore quarterback Drew Ehrlich, who passed for 288 yards and four touchdowns, including three in the first half. He also ran for two scores as well.
The teams combined for 34 points in the opening quarter with Faust putting South River (7-0 overall, 6-0 AA County) on the board first with an 11-yard scoring pass to senior Sean Leonard, which was countered by a 43-yard touchdown pass from Ehrlich to Dan Shea.
The teams traded scores again as Johnson scored on a 12-yard run for South River and Ehrlich went up top for a 70-yard bomb to Andrew Woods. The Seahawks led 21-13 at the end of the opening quarter following a 6-yard touchdown run by Asa Evans.
The second quarter belonged to Ehrlich and Broadneck, as the Bruins outscored the Hawks 20-0 to take their 33-21 lead. In the stanza, Ehrlich scored on a pair of 1-yard runs and completed a 59-yard TD pass to Davion White.
Ehrlich also opened the fourth quarter with a 12-yard touchdown pass to Shea, pulling the Bruins even, at 41-41, but Evans added his second touchdown run of the night, from four yards out, with 1:24 to play to provide the winning score for South River.
Broadneck (3-4, 3-3) tried valiantly to rally behind Ehrlich in the final minute as he got his team into position for a last ditch Hail Mary pass which was intercepted in the end zone by the Seahawks’ Sean Leonard.
Pictured above: South River’s Delvin Johnson rushed for two touchdowns and 232 yards in his team’s 48-41 win over Broadneck.