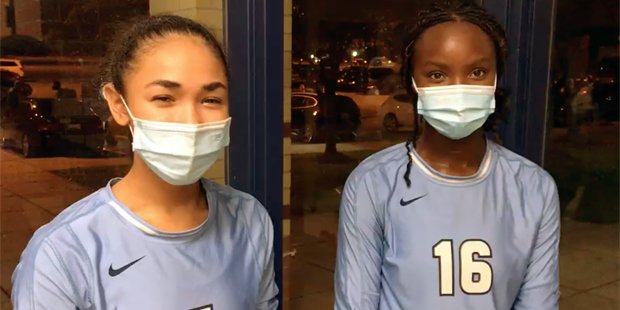 Since falling to Reservoir in the Howard County championship match by the slimmest of margins in April, Howard’s volleyball team has looked forward to the rematch. It didn’t matter that it came early in the season.

“I think it helps to have the momentum now, because we established a baseline confidence and we’ll only get better from here,” said outside hitter Kelenna Onukwugha, who led the Lions with 13 kills.

The visiting Lions (2-0) set the tone early with serving, defense and passing while the Gators (2-1) often struggled with their attack.

“We came out hungry for a win,” Howard coach Allison McCoy said. “We had a little taste in the spring of how competitive our two teams would be against each other, so we’ve been excited to face them and have just been working towards it all season so far. Our plan was to be aggressive in serving early on to get them out of system so we could run our offense and we did exactly that.”

A few Gators hitting errors and trouble on serve receive against Morgan Harris and Ayanna Pharoah helped Howard build the early first-set lead and the Lions played much more smoothly throughout the match.

“I think it was really important for us to stay together as a team,” Onukwugha said. “When we would get in a rut, we’d go quiet and that’s when we would start losing our poise, so whenever we came together, it got better immediately.”

That togetherness helped the Lions stay strong as they rebounded from four- and five-point deficits in the fourth set. After the Gators took a 20-18 lead on a Foster kill, the Lions won the next four points, including two Onukwugha kills and a block from Sanaya Srivastava.

The Gators rallied to tie at 23 and 24 before Tyller Williams and Darien Garner combined for a block on Foster to boost the Lions to a 25-24 lead. They won the final point when Samiha Foster’s hit touched the antenna trying to get around Corinne Chau’s block.

Chau had nine kills and Howard setter Pharoah dished out 36 assists. Middle hitters Srivastava and Williams had six kills each.

“I thought our defense really stepped up and because of them, we were able to run our middles and that helps keep enough variation in the game to get us our swings and kills,” said McCoy, who noted libero Briana May and defensive specialist Morgan Harris for their stellar defense.

The Gators won the second game to tie the match, polishing it off with a consistent string of kills, something that eluded them much of the match. Foster, who finished with 20 kills, had three kills before Kelsey Holmes, who finished with seven kills, pounded down set point.

For the match, the Gators’ hitting efficiency was just .114 when it had usually been between .600 and .700, said coach Carole Ferrante.

“We’ve only played a couple of matches and we haven’t played heavy competition,” Ferrante said, “but we did play in a play day and we did play against the No. 1 ranked team in The Washington Post and we performed very well against all of those teams. I think tonight was just an off night … but Howard definitely came out to play. I thought they played an outstanding game. They were strong offensively, defensively, very aggressive with their serving and we were not.”

The Lions and the Gators will meet again on the last day of the regular season as Howard hosts the finale on Oct. 21. However, they could play before that since both travel to the Oakdale Tournament Saturday.

Pictured above: Corinne Chau (left) and Kelenna Okunwugha talk about No. 4 Howard volleyball’s upset win over No. 3 Reservoir Monday night. The two outside hitters combined for 22 kills in the match, a 3-1 victory for the undefeated Lions.