No. 2 Lions run past Arundel for spot in 4A state girls hoops Sweet Sixteen; Harris and Scott combine for 29 (VIDEO HERE!) 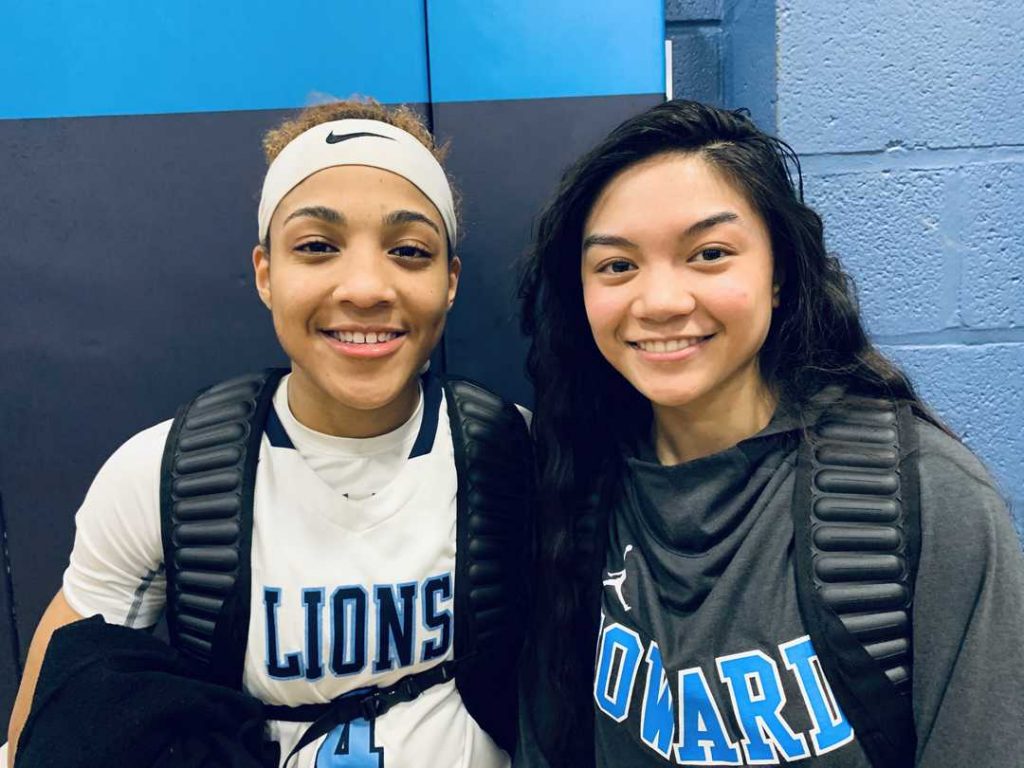 Howard, with Anii Harris and Camille Malagar, continued its dominant season in the Class 4A North Region I playoffs Monday evening. The second-ranked Lions defeated No. 14 Arundel, 62-35, to improve to 23-0.

No. 2 Howard defeated 14th-ranked Arundel, 62-35, in a Class 4A North Region I semifinal in Ellicott City. Harris scored 17 points for the Lions, and Gabby Scott finished with 12.

The Howard County champs built a 22-point first half advantage then weathered a second half push from the Wildcats to improve to 23-0. The Lions will host No. 13 Meade – a 66-60 upset winner over 10th-ranked Old Mill – in the region final Wednesday evening.

It’s all or nothing proposition for Howard, seeking its first state championship.

“It’s a lot of pressure, but we love it,” said Malagar. “It motivates us.”

“It lights a fire under our butts to go hard,” said Harris. “We hate losing. We do not want to lose.”

The Lions chase for perfection continued Monday with an overwhelming start. They led 22-8 after the opening eight minutes as Malagar paced six scorers with eight points.

Howard kept its kinetic pace into the second, expanding the advantage to 30-8 after Marisa Sanchez-Henry basket off a turnover. The Lions led 33-15 at halftime.

“We knew we couldn’t take this game for granted so we came out with a lot of energy,” said Malagar. “We knew this team was good so we knew we had to bring it.”

Arundel, down 22 at one point, shaved the deficit in half to 41-30 after Heather Middleton’s jumper with 12 seconds remaining in the third. Sanchez-Henry found junior Emily Durkee in the corner, and Durkee buried a 3-pointer with two seconds left, pushing Howard’s lead to 44-30 entering the fourth.

Lions coach Scott Robinson was impressed with the effort.

“We played with a lot of intensity…they’re a good team,” said Robinson. “We set the tone early defensively and I thought our shot selection was good.”

Robinson, who guided Mount Hebron to a 28-0 record and the Class 2A state title in 2008, said the Lion senior leadership of Harris, Malagar and Sanchez-Henry, has kept Howard balanced.

“They’re all focused,” said Robinson. “They see the big picture.”

Wednesday’s winner advances to the 4A state Elite Eight Friday.

CLASS 4A NORTH REGION I SEMIFINAL