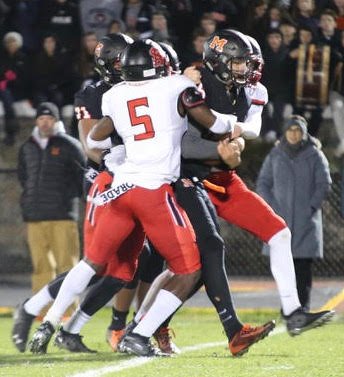 McDonogh School junior quarterback Preston Howard has given a verbal commitment to the University of Maryland. Howard made the announcement on his Instagram account Sunday afternoon.

“I’m staying home,” said Preston donning a Maryland football windbreaker in the final seconds of a two-minute video shot on the McDonogh campus.

Preston, the nation’s No. 10 dual threat quarterback prospect in 2022 by 247Sports and the state’s No. 11 overall prospect by Rivals, would be the first top quarterback prospect from the Baltimore region signed by Maryland in years. As a sophomore, Howard passed for 1,029 yards and 12 touchdowns and rushed for 739 yards and six touchdowns as McDonogh reached the MIAA A Conference championship game.

The Eagles, which finished No. 3 in the final VSN Top 20 in 2019, did not play last year because of the COVID-19 pandemic. McDonogh could be the favorite to win the MIAA A title in 2021 with Howard, defensive end Dani Dennis-Sutton, the state’s No. 1 recruit and consensus national Top 20 prospect and defensive tackle Kwan Williams (16th-ranked prospect in Maryland by Rivals).