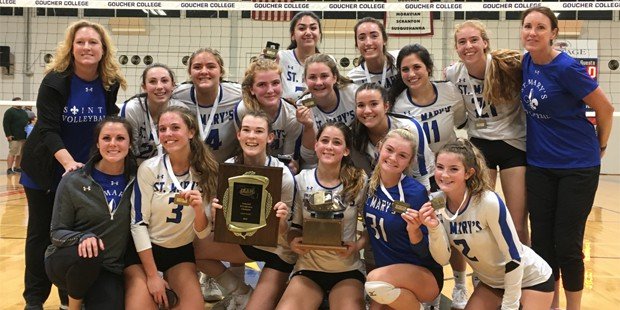 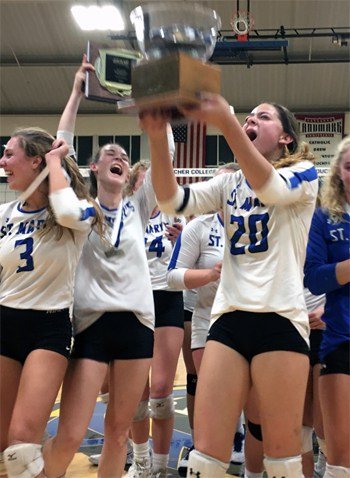 Junior outside hitter/middle blocker Olivia Colella hoists the IAAM championship bowl (right) while senior outside hitter Alli Cherry does the same with the plaque after St. Mary’s earned its first IAAM B Conference volleyball title Saturday at Goucher College.

St. Mary’s steady climb from B Conference mediocrity to the league penthouse took a number of years and a lot of perseverance to achieve.

Unfortunately for the Saints, their perfect conference mark was torn asunder by Catholic High in a stunning 25-20, 25-21, 25-20 sweep in the championship match.

Although top-seeded St. Mary’s (16-3, 9-1 conference) started strong in the first set against No. 3 seed St. John Catholic Prep (12-5, 8-2) on Saturday afternoon in the 2019 finale at Goucher College in Towson, the same malaise that plagued last year’s squad seemed to return as the Vikings prevailed in the next two sets.

This time, though, the Saints refused to wilt against a foe that had beaten them on their home court in Annapolis on Senior Night two weeks earlier.

“We never lost confidence and we never got down on ourselves,” said Colella. “We knew we had to do it because we’ve been waiting so long for this. It was like a flame that lit inside of us in that fourth set.”

That’s when the Vikings jumped out to a 4-0 advantage after consecutive aces by sophomore setter/opposite hitter Audrey Spindle and maintained
the lead until the Saints drew even at 8-8 and then inched ahead on a Cherry kill.

Junior middle blocker Grace Murray’s kill equalized for SJCP, though only briefly, as the Saints went back on top on a Viking service error and were never caught again. Colella had a lot to do with that by authoring three kills down the stretch as St. Mary’s secured the set on another Cherry kill.

Regaining its form, St. Mary’s never trailed in the final set after overcoming an early 1-0 deficit.

The Saints went ahead for good on an ace by senior libero Marina McAteer and found themselves on top, 10-4, after Heary’s final kill.

The Vikings rallied to pull within two points twice, the second time on a tip by senior outside hitter/ defensive specialist Samantha Black, but would not come any closer.

“I watched the match last year, when we played scared and not to lose,” said St. Mary’s coach Sarah Heary. “And when we were doing that again tonight, I just told them to keep it simple. If we were serving well and passing well, we could run run our offense, and we would be fine. We just had to execute. We knew what we had to do.”