Hoot of a comeback 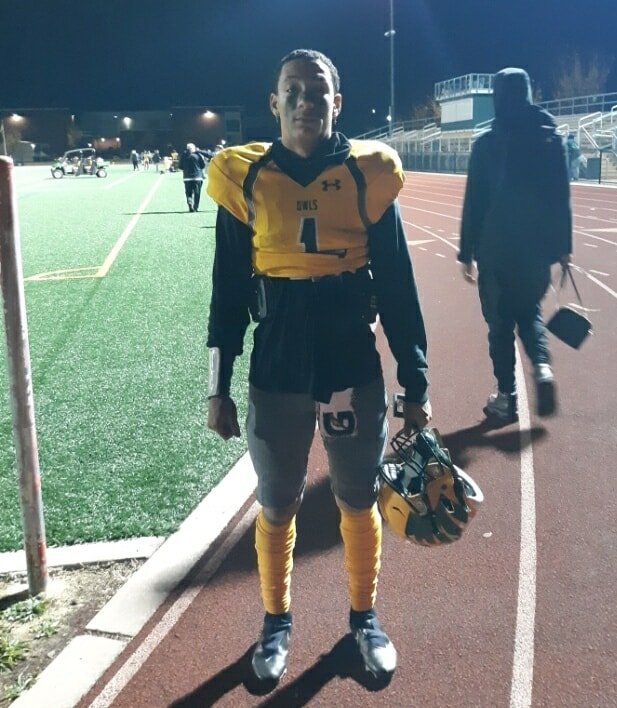 Comeback Calvin: Dundalk senior quarterback Calvin Stokes helped his team to huge Friday evening. He directed three fourth quarter scoring drives, hitting Marcus Nicholson for a 52-yard touchdown with 3:21 left in regulation as the No. 7 and undefeated Owls rallied for a 20-15 over Urbana in the Class 3A state quarterfinals.

Dundalk High football hasn’t faced much on-field adversity during its undefeated season. That changed in a big way Friday night.

Frederick County’s Urbana had the Owls’ dream season in nightmare mode in the second half, but Dundalk’s determination, resilience and playmaking ability kicked in just in time.

The No. 7 Owls rallied for a 20-15 victory over Urbana in a Class 4A/3A state quarterfinal contest in Baltimore County. Senior quarterback Calvin Stokes finished 13-of-17 passing for 168 yards and a touchdown along with a rushing touchdown.

The Delvale Avenue school scored three touchdowns in the final quarter, advancing to their first state semifinal since 2015. Dundalk will host Arundel – a 29-21 winner over Montgomery County’s Seneca Valley – next Friday evening for a spot in the state championship game at Navy-Marine Corps Memorial Stadium in two weeks.

The Owls’ title hopes are alive and well, thanks to Stokes, who rebounded from an erractic start to engineer three fourth quarter scoring drive.

“I had a slow start in the beginning of the game, and it was just that I wasn’t there mentally and physically in the first half. But in the second half I knew I had to come win this because I wasn’t done with my guys,” Stokes said.

“This is the first time ever in Dundalk history that we went undefeated. It’s the first time in six years that we made it to the semifinals… it’s a statement that we ain’t done yet.”

After uneventful first half, Urbana gained command in the third. On the second snap, Hawks quarterback Keegan Johnson launched a 70-yard pass to Ezekiel Avit.

On their next drive, Johnson (201 yards passing) hit receiver Riley Smith on a well-timed slant route for a 56-yard score, extending the Hawks’ lead to 15-0 with 6:52 remaining in the third.

With a quarter and a half potentially left in its season, Dundalk began picking up momentum and worked into scoring position. Less than a minute into the fourth, Stokes scored on a two-yard quarterback keeper.

The Owls’ defense recovered an Urbana fumble, and the offense went back to work. Fiorenza capped a 58-yard drive with a 15-yard jaunt, closing the margin to 15-14.

After another Owl defensive stand, Stokes found Nicholson and Dundalk had its first lead.

“No quit in these kids,” Dundalk coach Matt Banta said. “They had a reason to put their heads down, start putting the blame on each other, but they picked each other up and grinded out a tough victory.”

The Hawks advanced to Dundalk’s 25-yard line on huge receptions from Avit and Smith but came up short of the first down. Stokes’ 1st down run with less than a minute to go sealed the comeback.

“They’re 11-0 for a reason,” said Wilson, who’s in his fifth season at the Frederick-area school. “Hey, we gave it our best. They just made one more play than we did.”

Friday’s victory was remiscient of the Owls’ 3A state semifinal victory over Prince George’s County’s Potomac in 2015. Banta was an Owl assistant.

“We’ve been in some dog fights this year that’s really tested our character and these kids always show up in dog fights,” said Banta.