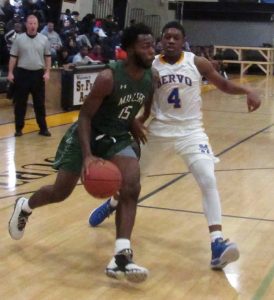 Milford Mill’s Jordan Goodwin drives past Mervo’s Demonee Carter during the first half of their boys’ basketball match at the GM/Baltimore Hoops Festival at St. Frances Academy. Goodwin scored 15 of his 17 points in the second half, rallying the No. 6 Millers from a 19-point deficit to improve to 6-0.

The last time Patterson and St. Frances Academy met on the basketball court, the Panthers handed the Clippers a decisive loss. The rematch Saturday evening played out differently, but the final outcome was the same.

No. 2 St. Frances defeated the 11th-ranked Clippers, 84-64, at Phelps Gym in east Baltimore in the finale of the GM/Baltimore Hoops Festival. No. 6 Milford Mill, No. 15 St. Vincent Pallotti and 17th-ranked McDonogh School were also victorious Saturday.

Randallstown got two free throws from Keyshawn Ennals with 1.2 seconds remaining in regulation for a 55-54 victory over New Era Academy in the opening match. Cameron Issacs finished with a game-high 23 points for the Rams (3-2 overall).

The Baltimore County school had a huge lead, but New Era rallied to take a 54-53 lead in the waning seconds. The Baltimore City squad had possession, but Rams junior guard Chima Idika knocked the ball away and Ennals was fouled going after the loose ball.

It was a gratifying win for the Rams (3-2 overall), who lost their two matches at the Governor’s Challenge in Salisbury during the holiday break. 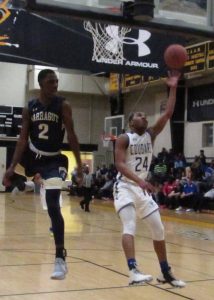 Mount Carmel’s William Miller (24) puts up a shot ahead of Farragut’s Christian Curry. Miller finished with 11 points as the Cougars posted a 60-52 victory over the Florida school.

Randallstown coach Kevin English said Saturday was the first time he had his entire roster healthy.

“We played with some heart,” said English, who got 11 points from junior Gregory Binns.

William Miller added 11 points for the Cougars (7-9), who led 31-20 at halftime. Farragut closed to within 52-48 with under a minute remaining in regulation, but Mount Carmel converted eight free throws down the stretch.

Stephen Cannady scored 15 points for the Panthers (12-3), and Kyron Martin finished with 11. The Laurel school has won 11 straight, the current longest streak in the area.

“The kids are playing defense and for each other which is hard to do,” said Panthers coach Dennis Murphy. “No one cares who gets the glory.” 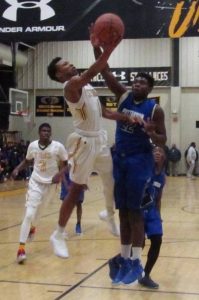 St. Frances’ Adrian Baldwin (left) attempts a layup with Patterson’s Eric James defending during the final match of the GM/Baltimore Hoops Festival. The second-ranked Panthers improved to 17-2 with an 84-64 victory over the No. 11 Clippers at Phelps Gym in Baltimore City.

McDonogh won for the ninth time in its last 10 outings as Noah Locke again was the spark. The senior marksman bound to Florida, scored a game-high 27 points. Drew Green and Ke’von Brown finished with 15 and 12 points, respectively.

Capital Christian pulled to 61-59 with 34 seconds left and got the ball after Johnson missed the front of an one-and-one. The Red Storm missed on three attempts in the paint and Locke captured the rebound and was fouled with 14.5 seconds left in regulation.

Locke converted two free throws for a 63-59 advantage, but Capital Christian quickly scored to make it an one possession contest. Capital Christian got a final chance after a Johnson missed free throw, but an off-balanced 3-point attempt at the buzzer missed the mark.

Trailing 19 points early in the second half, Milford Mill stormed back, claiming a 54-50 victory over Mervo. Senior guard Jordan Goodwin scored 15 of his 17 points in the second half for the undefeated Millers (6-0) and Ugo Obasi and Jermaine Goodwyn each finished with 11.

Down 43-32 entering the fourth, Milford Mill pulled even at 48 with 1:20 remaining in regulation after an Obasi driving score off the baseline. Obasi, a senior headed to Virginia to play football, forced a steal that led to two free throws from Goodwin for the lead with 35.3 seconds left.

“We came out at halftime knowing we weren’t going to lose,” said Obasi. “We’re a much better team and we showed it.”

Two free throws from Goodwyn with 13.1 seconds remaining made it 53-50, and Goodwin added one with 4.7 seconds. Goodwin, who played at St. Frances his first three varsity seasons, intercepted the ensuing inbound pass to complete the rally.

Goodwin said he was “emotional” about playing at his former school, especially in the second half.

“I think we were all kind of dragging and not really going hard,” said Goodwin.

Mervo dominated the first half, leading 19-9 after the opening quarter and 32-16 at the break. The Mustangs led 35-16 early in third.

Unable to find a rhythm from the perimeter, Milford Mill began attacking the basket and chipping away at the deficit. Trailing 47-38 in the fourth, the Millers scored eight straight, capped by Obasi’s basket, to close to within one.

“We’ll definitely reference this game when we get into another tough game,” said Milford Mill coach Ryan Smith. “A lot of these kids have been in big games so we weren’t going to panic.”

Will Thomas finished with 13 points for Mervo (4-3), which led 43-32 entering the fourth. The Mustangs, considered a team on the rise in the Baltimore City league, played close to No. 4 Dunbar last month before fading in the fourth.

“That’s the trait of a young team and getting four transfers in September,” said Mustangs coach Deron Harding. “We’re a work in progress.”

The Panthers (17-2) led 53-38 early in the second half, only to see Patterson climb to within six early in the fourth. The East Chase Street school outscored the Clippers, 24-10, the rest of the way.

“We missed 14 free throws, the defense wasn’t as sharp,” said Myles. “I’m glad with the win, but we can’t have this same kind of performance against Boys’ Latin.”

The Panthers, who play at the No. 9 Lakers Monday evening in a MIAA A Conference match, weren’t able to shake off the defending Baltimore City Division I and Class 2A state champs, until the final three minutes of regulation Saturday. The Clippers trailed 60-54 with 6:19 remaining after two free throws from Gerard Mungo.

Koran Moore, who transferred from Patterson to St. Frances a couple of years ago, converted a 3-point play off an offensive rebound, and Rajear Jones converted off a drive, stretching the Panthers’ advantage to 65-54. Daesean Jones’ 3-pointer brought the Clippers back within striking distance at 68-61 before a 7-0 run, capped with a Ferguson dagger from the corner, finally put St. Frances in the clear.

The Panthers got off a quick early start, but Patterson, behind its outside shooting, claimed a 21-20 lead after the first. St. Frances’ depth began taking over in the second as reserve Detwan Montague scored six straight points in the quarter, helping the hosts to 46-32 halftime advantage.

Mungo, who transferred from St. Frances to Patterson after his freshman season, finished with a game-high 23 points and Ty Thomas added 15. Sophomore guard Zac Blackwell had 11.

“We made a lot of mistakes down the stretch, but we played much better than last year,” said Thomas, one of eight juniors and sophomores on the Clipper roster. “St. Frances is a tough team. We have to get better and get ready to dominate the city league.”