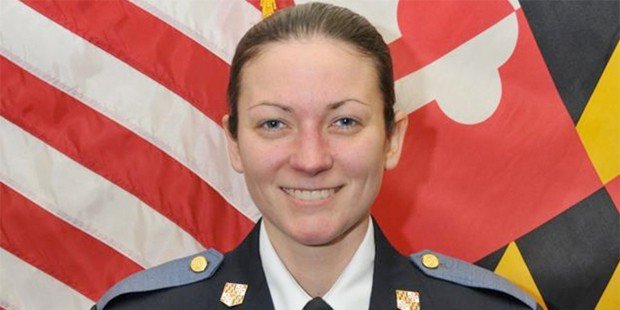 There will be plenty of tears on Senior Night for the Loch Raven High girls soccer team, Oct. 17 against Parkville, and not just because it will be the last home game for those graduating in the spring.

Most of the people who will attend the 6:00 p.m. event will also be mourning and memorializing Amy Caprio, a Baltimore County Police Officer and former backup goalie for the Raiders who was killed while attempting to apprehend burglars in Perry Hall last May. 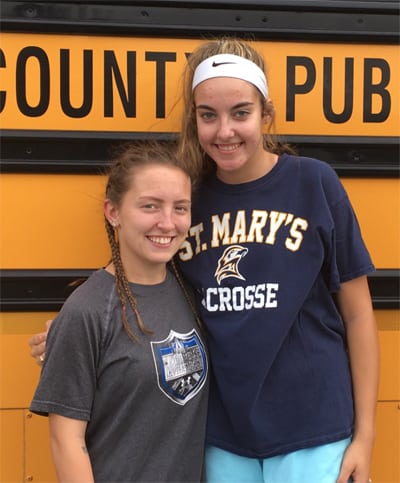 According to current Raider players Savannah Scott and Kendall Broglio, emotions will be running high at the Officer Amy Caprio Memorial Soccer Game.

“We want this to be a humongous event, so we’re hoping that we can help to keep her memory alive,” said Scott, a senior starting defender. “It’s going to be very emotional.”

Broglio, a reserve defensive midfielder, said that it’s fitting that Senior Night and the memorial game are being bundled together in such a meaningful way.

“It really hit close to home when I heard about her,” Broglio said. “It’s great that we get to share Senior Night with her. I know I’m going to be crying.”

On the pitch for the Raiders or on duty for the BCPD, Caprio was not one to shirk responsibility.

When she had a job do do, she did it, even though it cost her life.

Four teens have been charged with her murder. Caprio was just 29.

For those associated with Loch Raven and the Raiders’ soccer program, the news of her death was a shock.

“I had heard about an officer (being killed), and then I saw her picture on TV,” said Mike Parker, the girls coach at Loch Raven when Caprio — then known as Amy Sorrells — played there. “But the name was different. So I told my wife, ‘I think I know that girl.’”

When it became clear that it was one of his former players, Parker reflected on the slain officer’s many contributions to the team, mainly from the bench and in practice.

“She didn’t start, but that didn’t mean she stopped working,” he said after his current team, Patterson Mill, topped Towson, 3-1, to improve to 7-3-1 this season. “She wanted to start, like everybody else, so her mission was to work hard. She pushed our goalies and she was always glad to be a part of the team. She was the support we needed, 100 percent.”

Current Loch Raven coach Anthony Menegatti, an assistant to Parker in those days, said that Caprio was the “consummate teammate” who he figured was destined to serve the Loch Raven-Parkville area in some capacity. 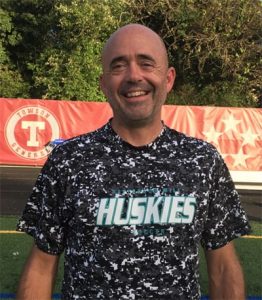 Current Patterson Mill girls soccer coach Mike Parker was the head coach at Loch Raven when Amy (Sorrells) Caprio was a reserve goalie with the Raiders.

Parker said that he will attend the game against Parkville, as will Caprio’s best friend from high school, Judith Stewart, who learned about her murder from a group text she shared with Caprio and their former gym teacher Danielle Grzebein.

“Amy and I were Dani’s student assistants at Loch Raven, and we have kept in contact after high school,” said Stewart, now a special education teacher in Carroll County. “We had lunch together in May, and for some reason, Dani had asked Amy what her patrol car number was.”

Stewart said that when she heard an officer had been injured, she and Grzebein texted Caprio to see if she was OK.

“We were piecing things together as the news was coming out,” Stewart said. “And then we saw the video of the car, and we knew something was wrong. I reached out to (Caprio’s husband) Tim, and he texted me back that it was Amy. I just lost it.”

Loch Raven athletic director Mike McEwan said that he wanted to do something special to memorialize Caprio.

“Once I found out who the officer was, I was devastated having met her and knowing she went here,” McEwan said. “I was going through the yearbook and saw that she was No. 24 and when it hit me that she was also a one of our goalies I figured it would be nice to honor her with a No. 24 goalie jersey (that will be framed in time for the ceremony).

He added that Mike Ellis from BSN sports offered to make three of the jerseys that will be part of the ceremony while Fast Break Sports in Parkville is making shirts at cost so that “we can hopefully raise a ton of money for the Fallen Officers Fund. I’m just hoping for a huge turnout and a sunny day.”

As plans for the Memorial Game came together, Parkville was selected as the most appropriate opponent, since it was the Parkville precinct to which Caprio was assigned at the time of her death. In addition, Caprio’s husband Tim is a graduate of Parkville.

“It’s a great opportunity for us to show our support for Officer Caprio’s family,” said Parkville High athletic director Jeff Markle. “I thought it was a great idea when Mike (McEwan) brought it up, and I’m really looking forward to it.”

All proceeds from the evening will go to support the Fallen Officers Fund. For information about the Fund or to make a contribution, please visiting www.nleomf.org.

Pictured above: Baltimore County police officer Amy Caprio, who was killed in the line of duty, two days shy of her 30th birthday. The former Loch Raven high school goalie is survived by her husband Tim.