No. 3 Poly laps City in second half for another region boys basketball title; Lewis goes for 34 and 18 (VIDEO HERE!) 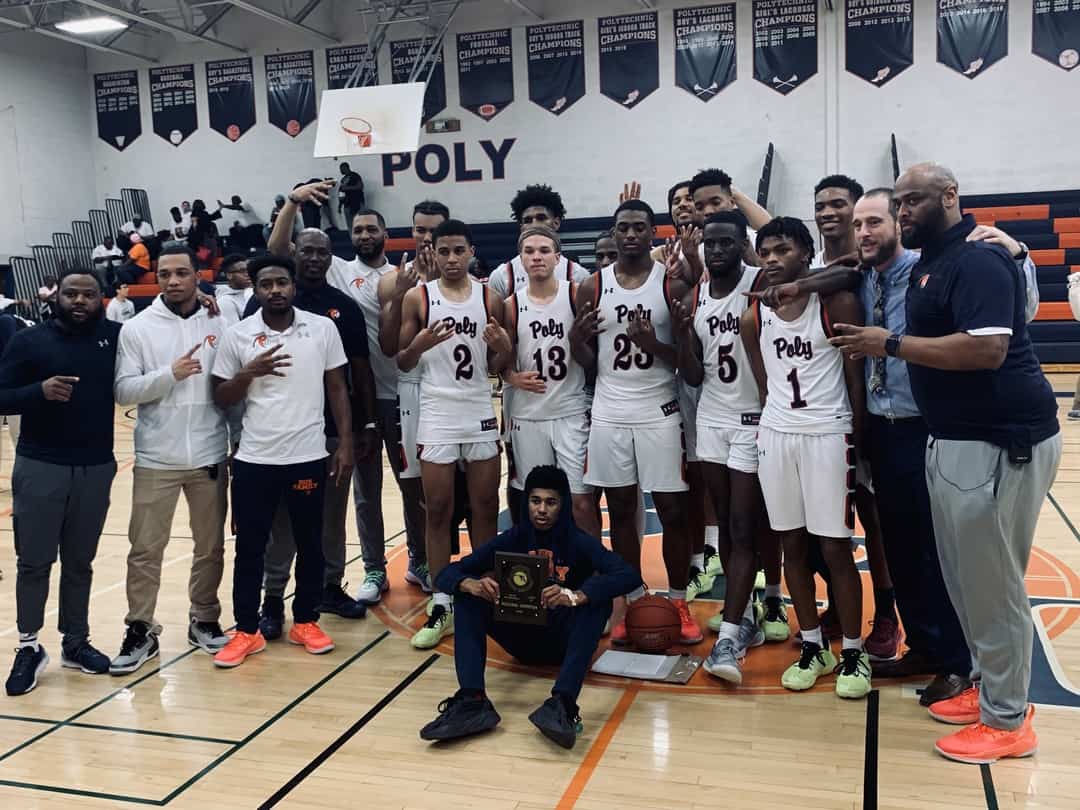 The accomplishments by Poly High boys basketball the last five years have been impressive.

They didn’t disappoint. No. 3 Poly defeated fifth-ranked City College, 91-60, in the Class 3A North Region I final inside Augie Waibel Gym.

Marquette University recruit Justin Lewis had 34 points, 18 rebounds and five blocked shots for the Engineers (23-2 overall), and Brandon Murray added 18. Dominic Carrington led City (21-3) with 11 points.
Poly, ranked 22nd nationally by ESPN, dominated its Baltimore City rival in the second half, earning its fourth straight region title. The Engineers will host a state 3A Elite Eight match, Saturday in Baltimore City, for the right to go the University of Maryland for next weekend’s state Final Four.
The Cold Spring Lane school showed why it’s the state’s top public program, using its length and perimeter shooting to outscore the Knights, 53-21, over the final 16 minutes. Sophomore guard Bryce Lindsay finished with 18 points.
“We knew we were the better team and we just needed to show it, just get stops and converting on our fast breaks,” said Lewis, the area’s top senior prospect. “We just needed to show our work.”
Poly coach Sam Brand, whose intense demeanor was evident in his soaked blue dress shirt, said he was calmed when he walked into the locker room at halftime after City scored the final five points to tie the game at 37.
“I told them what everybody else wants is us to be upset that the game’s tied and we know the city was happy the game was tied,” said Brand. “I knew they were ripping their own heads off because they know we didn’t play our best basketball. It was positive energy, thinking about where we are right now, what we have to do in the second half, and our seniors stepped up.”
Lewis, who dropped , started the onslaught with a block. After making a free throw to start the second half scoring, then Poly forced a turnover on the ensuing inbounds, and senior point guard Rahim Ali found Kwame Evans for a layup.
Ali contested City’s Ahmad Harrison’s shot and Lewis nabbed the defensive rebound. Lindsay drained a 3-pointer on the other end for the Engineers, and Murray stole the ensuing inbounds, leading to an Evans free throw.
Lindsay converted two free throws after City’s Karrell Booker drew a technical foul. Moments later, Murray dropped a dagger making 49-37 in a little over 2 minutes, 30 seconds.
It was 71-45 after three quarters.
“We had to pick up our energy,” said Lindsay. “We had to bring that dog out in us.”
Lindsay had 11 points in the third including three 3-pointers. Poly had 12 Thursday with Lindsay dropping five including a Seth Curry-esque bomb to make it 61-42 in the third.
Brand said Lindsay’s shooting depth has helped Poly become nearly impossible to defend.
“We all believe Bryce is going to be a special player here,” said Brand. “Bryce has been growing and growing. When our seniors leave, he’s going to surprise some people.”
City, which gave Poly its closest game in Baltimore City league play a few weeks ago on its home court, was again up for the challenge Thursday. The Knights scored the game’s first five points and led 15-9 after a 3-pointer from Harrison.
The Engineers, as they have against most of their opponents this season, began imposing their will defensively inside and in transition. Poly went on a 24-10 run, capped with Jonathan Lamothe dunk following a Lewis deal, to claim a 33-25 advantage late in the half.
The Knights, who were blitzed early by Poly in the prior match, closed strong with 3-pointers from Carrington and Booker, and a runner from Harrison before the halftime buzzer. City coach Omarr Smith said switching defenses and execution had his team in contention.
Then came the second half.
“They made some adjustments but, more importantly,” said Smith, “they made shots.”

Justin Lewis was dominant for Poly boys basketball. The Marquette University recruit had 34 points, 18 rebounds and five blocked shots as the No. 3 Engineers advanced to the Class 3A state quarterfinals with a 91-60 victory over fifth-ranked City College in the North Region I final inside Augie Waibel Gym in Baltimore City. (photo – Jimmy Fields Sr.)

Poly, which won region final games in Montgomery, St. Mary’s and Charles counties and at Dundalk, will be back at Waibel Gym Saturday, needing a win for a fifth trip to College Park.