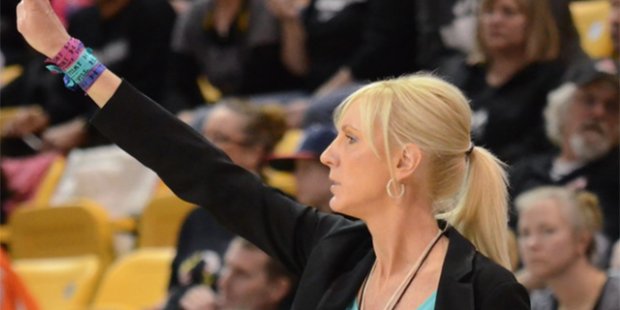 Holly Ismail, who led Patterson Mill to three Maryland girls state basketball championships, most recently in 2017, has been named the new girls head basketball coach at John Carroll School.
Ismail’s first state crown came in 2014 when she was named Varsity Sports Network’s Girls Basketball Coach of the Year. After leaving Patterson Mill, she spent one year as an assistant at John Carroll and has also served as an assistant coach with the Harford Community Colege women’s basketball team. In addition, she has served as head coach of the Maryland Elite program.
Before her coaching career, Ismail starred as a player at Syracuse University where she still holds the record for most blocked shots in a game, season and career, while ranking third in career points. She was named to the 1991 All Big East team and has been inducted into the Connecticut Women’s Basketball and Volleyball Halls of Fame.
“When I learned that the head girls’ basketball coaching position was open at The John Carroll School, I immediately felt excitement for the possibility of coaching at a school that is already familiar to me personally for my family and professionally,” said Ismail, whose son Qadir, a 2018 graduate, played football and basketball for the Patriots. “As a long-time successful basketball coach both in Harford County and at the national level, this opportunity is a natural fit for me to continue coaching and developing young female athletes and building a well-respected program at JC.”
John Carroll athletic director Seth Goldberg, who coaches the John Carroll boys varsity team is excited about the addition to his staff.
“We are extremely excited to welcome Holly back to The John Carroll School,” said Goldberg. “Her basketball credentials are second to none, and success has followed her in every step she has taken, both as a player and a coach. Even with all her accolades, this decision was made based on her passion to help our girls grow. She will be a tremendous role model and her vision and philosophy of building a successful, positive culture here aligns perfectly with our school’s mission and direction.”