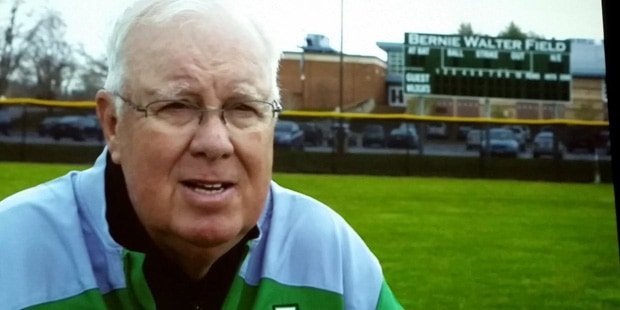 Hall of Famer, who won 609 games at Arundel High, succumbs after two-year battle with leukemia

Bernie Walter was a teacher first, impacting the lives of many.

He taught scores of young men the game of baseball and the game of life. His legion of players have lost him.

Bernie Walter in 2015 at the dedication of Bernie Walter Field at Arundel High School. (Photo courtesy of Wendy Quattrochi)

Walter, the legendary baseball coach at Arundel High, passed away Friday night at the age of 78 after a relentless battle with leukemia and nagging hip problems.

“Bernie was a great teacher,” said Dean Albany, a Philadelphia Phillies scout who played at Brooklyn Park High against Walter and later played for him with Leone’s.

“He really knew the game and how to teach it. His knowledge was unbelievable and his desire to help kids learn the game was something special.”

Bernie was still teaching at the end.

“He taught a nurse what not to call him,” said Barbara, his wife of over 50 years on Thursday.

“Bernie wasn’t happy being called Bernard and let the nurse know it closing his eyes and ignoring her. We (Barbara and daughter, Kelly) let her know to call him Bernie or Coach and she did and everything was fine after that.”

Barbara was at Bernie’s side Friday and said in a phone call that “Bernie passed peacefully and I believe he is in a better place now.”

Daughter Kelly and her husband, Rudy and Bernie’s five grandchildren have comforted Barbara throughout the ordeal.

Walter’s legacy as a baseball coach is incredible. He became the most successful public high school baseball coach in Maryland history setting records for state championships (10) and wins (609-185, .767 percentage) in 36 seasons at the Gambrills school (1974-2009).

His first two state championships came in 1976 and 1977 with Neal Herrick and Frank Parreira leading the way.

Fellow Brooklyn Park High grad, Nick Jauschnegg, who was the Wildcats’ boys soccer coach, was Walter’s third base coach for 32 of the 36 years.

The 1993 Wildcat team won the school’s sixth state title under Walter and finished No. 1 in the nation by Collegiate Baseball. Walter said the ’93 club (21-1) was his “best ever defensive team” with its team fielding percentage of .966 and 20 double plays.

“Bernie taught us the mental aspects of the game and that had a lot to do with our success,” said former Arundel first basemen/pitcher Tim Giles, who was the 1993 Metro Player of the Year.

Brandon Agamennone, a two-time All-Metro pitcher on that team, echoed Giles’ remarks that season and pointed to coach Walter’s emphasis on constantly learning.

“I learned so much from him as did all the team,” said Agamennone back then. “He always reminded us to never stop learning.”

Later in 1988, Walter would become the only Maryland coach to lead the USA Junior National Team to a World title in Australia, and did it with a first time triumph over Cuba.

The silver-haired Walter, who lost his dad at a young age, grew up playing in one of the finest baseball programs for little guys ever in Maryland, the Brooklyn-Curtis Bay Little League.

Founded by Bert Shannon, the league had many former successful players and coaches who knew the game and how to teach it. Walter was all in and acquired a taste that was infectious and became a life-long passion.

Walter came to Arundel in 1971 and became baseball coach in 1974 after Wildcat athletic director Steve Carroll had tried to talk him into taking the reins of the lacrosse team.

The coach didn’t care for long hair and liked game stirrups with white sanitary socks. The white had to show and everyone wore them the same way.

No long hair and stirrups with white hose became the Arundel way – no exceptions.

Coach was a disciplinarian who gained the respect of his players.

After playing shortstop for three years at the University of Maryland, Walter got into coaching baseball at Archbishop Curley. He was the junior varsity coach for six years under Al Frank before a physical education job opened at Arundel.

In addition, he was an outstanding classroom teacher in several areas, and in his latter years as a health education instructor.

Off the diamond and out of the classroom, Walter wrote several books on baseball and coaching. He served on various committees.

Walter started the Brooks Robinson High School All-Star game in 1981. He was also president of the Anne Arundel County Sports Hall of Fame for 12 years before reviving the Maryland State Athletic Hall of Fame in 2010.

Three years ago, the baseball field at Arundel was named after Walter and former standout lefty and 1986 grad, Denny Neagle was on hand for the dedication.

“Bernie was a perfectionist who demanded perfection from his players and to practice the same way you play the games – hard,” said Neagle, who pitched 13 years in the big show.

Bernie Walter did it all in baseball. There has never been a coach or teacher quite like him.

Below is a 2019 interview with Bernie Walter, conducted by VSN’s Joe DiBlasi at Oriole Park at Camden Yards. Walter shared much about his baseball legacy and talked extensively about the Leone’s/Johnny’s history in advance of the dedication of a monument, in Baltimore’s Swann Park, honoring the team and the many players it sent on to Major League Baseball.