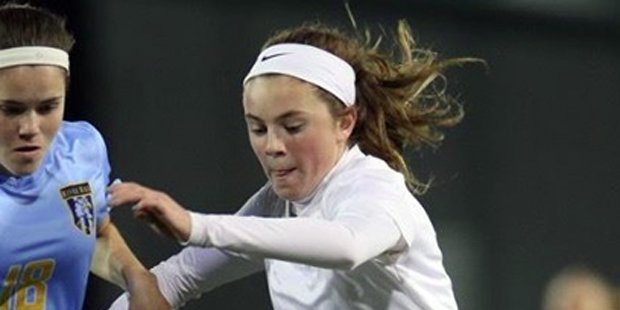 Payton Patrick, a four-year star at Hereford High School who is off to play at the University of South Carolina, was named the Maryland Gatorade Girls Soccer Player of the Year this week.

Patrick, who helped the Bulls to a 7-0 record in the abbreviated Baltimore County girls soccer season, played this spring, scored 11 goals and had eight assists in 2021, scoring two or more goals five times. Recently, she played in High School All-American Game and is a member of the U.S. Soccer Under-19 Women’s National Team player pool.

For her high school career, Patrick scored 81 goals and added 48 assists and was ranked No. 103 in the Class of 2021 by Top Drawer Soccer. She was also a three-time All-State selection.

Another factor in her recognition by Gatorade, which considers “high standards of academic achievement and exemplary character demonstrated on and off the field,” is Patrick’s 4.78 GPA as well as work in the community. She developed a training program for young soccer players called ACE (Attitude-Commitment-Execution) and she volunteered locally to help raise funds for Alzheimer’s Research. In addition, she has donated her time to service at the House of Ruth, a home for abused women and children.