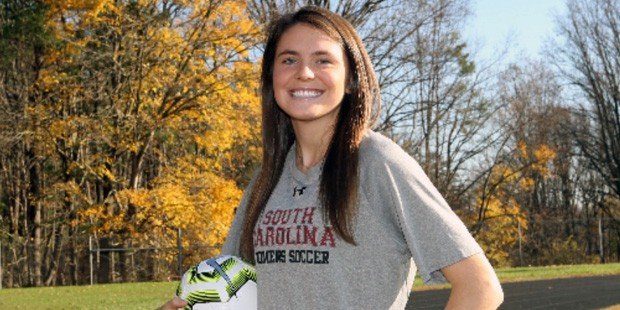 On Nov. 11, she rolled out of bed at 6:58 to sign her National Letter of Intent to play for South Carolina at precisely 7 a.m., the earliest recruits can sign. In any other year, Patrick, a USA Today All-USA first-team selection in 2019, would have looked forward to an afternoon ceremony with all of the other Hereford athletes signing on campus.

Instead, she enjoyed a small celebration at Casa Mia Restaurant in Parkton with her friend and long-time teammate Laura Schmidt, who signed with Bucknell. The girls’ fathers set up the event so they could have their moment amid the COVID-19 pandemic that wiped out their senior fall season and the school signing ceremony.

“We’ve played together forever, so we got to do a little thing and that was kind of exciting because we got to get a couple pictures together. We had a Gamecocks flag and then she had the Bucknell flag and so it was special,” Patrick said.

Still for a 4-star prospect heading to one of the top women’s soccer programs in the country, the conclusion of the recruiting process was bittersweet.

“Usually my recruiting class in South Carolina would be down in Columbia middle of October when you would have an official visit. They would take videos of us. We’d probably go to a football game and stay with the teammates. The Class of 21 kind of got screwed out of that I guess you would say, but I think South Carolina made the (signing day) posts really special. They were the first SEC team to even put up anything about their recruits, so that made me feel like, ‘Wow. I really appreciate where I’m going,’” said Patrick, who plays for the Pipeline Soccer Club team ranked No. 1 in the country after the 2019 season.

One of the most prolific scorers in Baltimore-area high school soccer, she can’t wait to get on the field with the Gamecocks, a Top 5 Division I program and an NCAA quarterfinalist twice and finalist once in the past four years.

The Bulls may play a short season in 2021, but even if they don’t, Patrick can look back on an exceptional high school career that made her a TopDrawerSoccer.com 4-star recruit.

A three-time All-State and Baltimore Sun All-Metro selection, she already has 74 career goals and 43 assists. Last fall, she scored 22 goals and had 11 assists as the Bulls finished 10-7-1.

Hereford coach Brad Duvall said the first thing you notice about Patrick is her speed.

“There are very few people that can keep up with her,” Duvall said. “And not just raw speed… She out-dribbles kids who are running without the ball. It’s mind blowing. I’ve got video of her from a couple games where there’ll be three defenders and she’ll dribble past them going away. I’ve never seen someone with that kind of speed with the ball, just the ability to control it, put it into space and run past people to give herself a lot of one-on-one options at goal.”

Schmidt, a defender and Pipeline teammate, has battled Patrick in practice since the fourth or fifth grade.

“Speed is definitely her secret weapon,” Schmidt said. “Even her runs off the ball, just watching her from a distance when we’re in a game, I notice someone else has the ball and Payton’s already on the move. She’s already planning the next play and is ready for whatever comes next. She’s always thinking ahead and when she does get the ball, she’s really good at distributing it.”

Patrick’s speed runs in the family. Her grandfather, Dave Patrick Sr., won state cross country and track titles at Kenwood and became the first Marylander to break four minutes in the mile. In 1967, he held the world record for 880 meters. At 74, he still runs five miles a day, his granddaughter said.

She said her grandfather “didn’t really like” that decision but he supported her and comes to all of her soccer games.

Running “was awesome for him, but what I want to do is to go on and hopefully get called into a national camp, get seen for the national team, which I think at South Carolina I have a really good chance to do. I think the players there draw a lot of attention… I think my grandfather’s going to be happy when hopefully one day I’m on the national team and he can cheer me on.”

Patrick said she chose South Carolina for the combination of great soccer, welcoming atmosphere and tremendous community support, but she also likes that she’ll have a chance to contribute right away.

From her first call during the recruiting process, Patrick said, “One of my big questions was, ‘Do freshmen make an impact?’ and they’re like, ‘Without a doubt,” That’s so clear this year with Cat Berry and Ranya Senhaji [who] scored their goal against Arkansas in their last game of the SEC tournament, so that swayed me so much.”

Patrick has been working for a while to strengthen her overall game, knowing college defenders will be as fast as she is. She’s heard that since early in her selection to the Olympic Development Program.

Duvall also praised her work ethic and has no doubt she’ll succeed with the Gamecocks, driven by her speed, skill and a strong aversion to losing.

“She’s done a good job in the last three years of adjusting and becoming a more complete player all the way around,” he said. “Not relying on just speed, not relying on just breakaways but being able to work within an offense to get herself open. She makes great runs and with the talent she’s going to have around her at South Carolina, they’re going to find her and she’s worked hard on her finishing. I think she’s going to be very successful when she gets down there and I don’t think it will take very long.”

Picture above: Hereford’s Payton Patrick is hoping for an abbreviate spring soccer season with the Bulls, but regardless she is ready for the next chapter as she will play for the University of South Carolina next fall. (Photo courtesy of John Roemer)