Hereford rushes for 401 in rout of North Harford 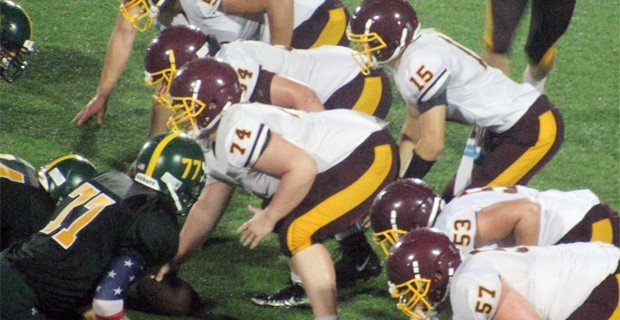 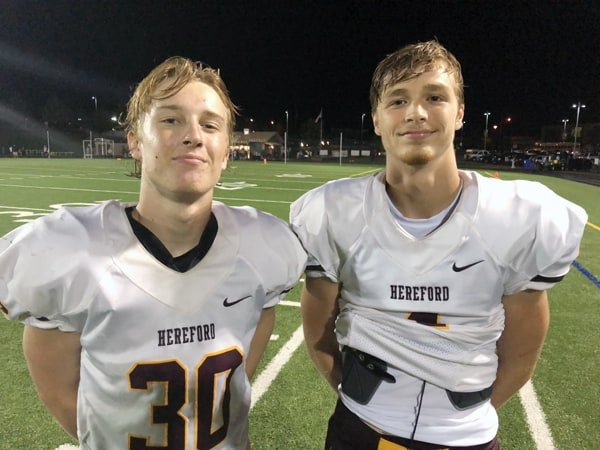 Hereford’s Connor Dunay (left) rushed for a team-high 174 yards and senior Jeff Wilson rushed for one score and caught a TD pass.

On a night when Mother Nature played havoc with the area high school football schedule, causing several postponements and mid-game suspensions, she only proved to be a nuisance for Hereford and North Harford as they were able to complete there traditional season-opening battle, Friday night in Pylesville.

The start of the game was delayed about 45 minutes because of some heavy thunderstorms, and much of the action took place in a steady rain, but the weather was about the only thing that slowed the Hereford offense, as the Bulls rushed for 401 yards in a 41-7 thumping of the host Hawks.

Hereford got going on its opening possession of the night, marching 64 yards in 10 plays, after its defense turned the ball over on downs at the Bulls’ 36. Sophomore Connor Dunay, who carried the ball 12 times for 174 yards in the contest, ignited the drive with a 22-yard burst on a third-and-eight play and senior Jeff Wilson capped the drive with a 13-yard touchdown run, also on third down.

“We were just clicking,” said Dunay. “The O-line was blocking right, the quarterback was throwing right on the money and the running backs were hitting the holes. We were just all on tonight.”

Keeney’s return was North Harford’s biggest highlight as he pulled in an overthrown ball at his own 10, raced up the far sideline across midfield, weaved through traffic back into the center of the field and then cracked a seam for a final 15-yard sprint to the end zone.

The rest of evening was dominated by the Bulls and Wilson indicated that his squad came into the contest ready to play.

“Things didn’t go our way early,” said Liebel. “We had trouble bouncing back from some adversity. We got our heads down and got ourselves in a hole. We battled back with a score but we just couldn’t keep the momentum.”

“Our O-line did the job tonight. They paved the way for us, no doubt,” said Evans. “We got everybody back. We were healthy for the first time. We went through two scrimmages with a lot of guys out, but everybody was ready for tonight.”

Picured above: Hereford’s offensive line dominated North Harford in the trenches, allowing the Bulls’ backs to race for 401-yards rushing.