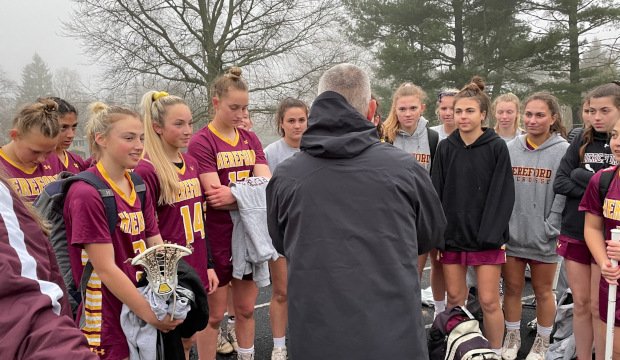 The No. 15 Bulls rally past the 16th-ranked Lions in one of Baltimore County’s best rivalry games

With 15.1 seconds left in Thursday’s showdown between perennial Baltimore County girls lacrosse powers Hereford and Dulaney, Hereford’s Jordan Peterson stepped up for a free-position shot that could win the game. 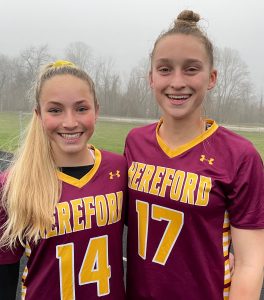 Freshman Cam Kauffman (left) and senior Jordan Peterson made some big plays down the stretch to lead No. 15 Hereford to a 10-9 win over No. 14 Dulaney Thursday. Kauffman tied the game and then won the next draw. Peterson scored the game winner on a free-position goal and won the final draw to secure the win.

Her No. 15 Bulls had rallied to tie after trailing by three with about 12 minutes left in the game, so Peterson kept her thoughts positive.

“You’ve got to be confident,” she said. “If you’re not confident, it decrease the chances of it going in, so I was like, ‘I’m going to the best I can and I’m okay with that.’”

Peterson, a senior midfielder, buried the ball in the low left corner to give the visiting Bulls a 10-9 edge that would hold up for the three-time defending Baltimore County champions.

The No. 16 Lions were leading, 9-8, when they picked up their fourth yellow card with 4:30 left and had to play man down for the rest of the game. They struggled to close all the gaps in their defense and Peterson took advantage of that.

“We were noticing that they were quick to double her,” Hereford coach Kelly Swift said, “so it was opening up a person wide open in the middle, so we kept running one play and it kept working, because they were jumping her so fast and then she was just dumping it, so we’re like, ‘If it’s not broken, keep going,’ and then she got that 8-meter shot.”

The Lions (0-2) had the better of play early, taking a 6-3 lead right after the half when Elena Emde dodged a defender at the 8-meter line and slipped through to goal.

They gained a lot of momentum from goalie Ellie Puente’s performance. The Lions split goalies and Puente came in for the second half to make five saves in the first 13 minutes. The teams traded goals to 8-5 on Emde’s free-position goal with 11:58 left.

The Bulls got a couple back when Bailey Berquist fed Maya Antonakas and Lindsey Moneymaker scored on a free position within a minute and a half, cutting the lead to 8-7 with 8:03 to go.

Dulaney’s Jenna Welsh pushed the margin back to two when she scored off an interception, but after that, the Lions’ fouls and turnovers took a big toll. The Bulls needed just seven seconds to score after the Lions got the yellow card that forced them to play man down the rest of the way.

Peterson drew the double team and hit Moneymaker for her third goal of the game to pull within one. Then freshman Cam Kauffman grabbed the ground ball after a Dulaney turnover and fired a high shot past Puente to tie the game with 1:42 left.

After Kauffman controlled the next draw, the Bulls set up to take a final shot. After her goal, Peterson won the final draw to assure the victory.

The Bulls also had fine defensive performances from Hope Barber as well as midfielders Peterson, Moneymaker and Antonakas.

“I’m so excited about our team,” Peterson said. “From early on I knew that this team had so much talent, so much potential and it’s a really new team. We lost a lot of leadership last year but coming into this season, I felt that his team was really special. All the girls are so positive, so encouraging. I think that’s so important in a successful team.” 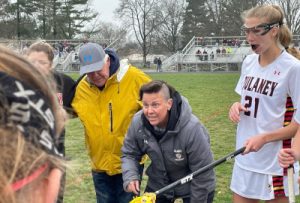 For the Lions, the loss was especially disappointing after their 21-9 loss to No. 11 Century in Monday’s season opener. They did improve on the fouling, because against Century they had to play two men down for the final 23 minutes.

“Playing man down you’re always at a disadvantage,” said Dulaney coach Kristi Korrow, “and it can be pretty brutal on the girls’ legs depending on how fresh they are, but I am very proud of them. In the Century game we practiced that, but we still scored four goals, so the girls despite being man down, I think the defense still did a nice job of holding … and we only lost by one goal.”

The rivals will meet again on April 19 at Hereford.