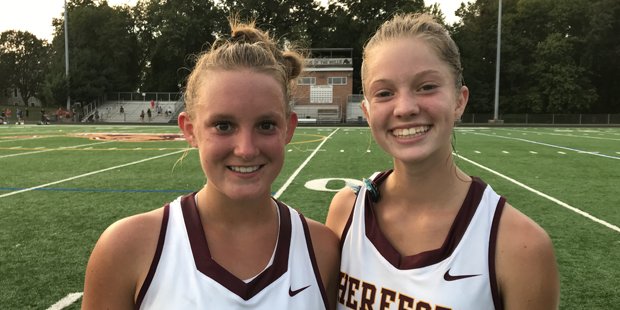 Hereford High’s field hockey team has dominated Dulaney in the Baltimore County championship for more than a decade, but the regular season has recently been Dulaney’s domain.

Tuesday night, however, the No. 16 Bulls scored an early goal and kept almost constant pressure on No. 14 Dulaney to emerge with a 2-0 victory in the county league opener for both teams.

Lydia Bennett and Morgan Hackett scored the goals as the Bulls won only their second regular-season game against Dulaney in the past seven meetings. The Lions won the last regular-season meeting during the COVID-shortened spring season.

The Lions (2-2, 0-1) could have another chance at the Bulls (2-0, 1-0) if the two teams make it to the Baltimore County championship. Odds favor both teams getting there.

In arguably the hottest field hockey rivalry in the Baltimore area, Hereford and Dulaney have played in 10 of the past 11 county championship games with Hereford winning nine titles. Seven of those championships were decided by one goal, including a shootout in 2019 and overtime in 2017. The Lions won two titles during that stretch, including one over Catonsville in 2013.

On the first of 17 Hereford penalty corners, Lydia Bennett fired a shot from just inside the circle that soared over the goal, but the junior midfielder would make her next shot count.

She dribbled the ball into the circle in traffic and shot through two defenders. The ball rolled just past Erdman’s right foot and into the far corner of the cage.

“We were able to set the tempo and get the team just excited,” Hackett said, “and I think that really motivated the whole team to speed up and keep our tempo but also keep composure.”

Hackett sealed the win in the third quarter when she slipped a rebound past Erdman with 8:36 left.

“The goalie deflected it and … we always practice hitting it right to the goalies’ pads, so I remembered that and I used it. We went to the right post and just hit it right to the corner and got a goal,” Hackett said.

After that goal, Dulaney drove quickly down field, but Bulls goalie Bailey Berquist stopped the Lions’ only shot of the second half.

“I love my defense right now because I have a lot of people I can place in different spots,” Hereford coach Caitlin Duvall said. “My middle girl, Kennedy Ziegler, she got beat up a little bit, but Maddie Fuller — she’s a sophomore — stepped in and really delivered for us.”

The Lions struggled against that defense despite a strong game from senior forward Emily Snyder and Dulaney coach Meredith Lott said they just didn’t manage enough attack to counter the Bulls.

“They were able to control the ball a lot more than we did,” Lott said. “They obviously had a lot more corners than we did. I think we only had four and we’re not meeting our team goal with only four corners. If you have more corners you’re in their circle knocking on that door ready to score and four is not going to cut it for us.”

The Lions shut out their first two opponents before dropping an 8-0 contest to No. 2 Garrison Forest Friday, but there’s still a lot of season to go.

“I am more than confident that this team is going to be able to bounce back from this,” Lott said.

Pictured above: Lydia Bennett and Morgan Hackett each scored a goal in Hereford’s 2-0 win over Dulaney.