Loyola’s Mitch Fischer tries to drive past St. Frances’ Jamal West during the first half of Friday’s Baltimore Catholic League Tournament semifinal opener at Loyola University. The No. 10 Dons got off to a promising start before the second-ranked and top-seeded Panthers dominated the final three quarters for an 82-58 decision and a shot at a 3-peat Sunday afternoon.

It was expected and it has been delivered.

No. 1 Mount St. Joseph and No. 2 St. Frances Academy each prevailed in the semifinals of the Baltimore Catholic League Tournament, Friday night at Loyola University’s Reitz Arena, setting the stage for showdown between the two powers in Sunday’s title game, also at Reitz.

The Panthers met No. 10 Loyola Blakefield in the opener and cruised to an 82-58 decision. St. Frances (37-4 overall), the top-seed and the two-time defending BCL champs, fell behind 8-2 in the first 2 minutes, 20 seconds of the game on Friday, when Loyola’s Mitch Fischer, Cam Smith, Rece Gardner and Gavin Walsh scored two points each for the Dons, forcing an early timeout by Panthers’ coach Nick Myles.

Myles said that he told his team to pick up the energy and not to look past this [semifinal] game. 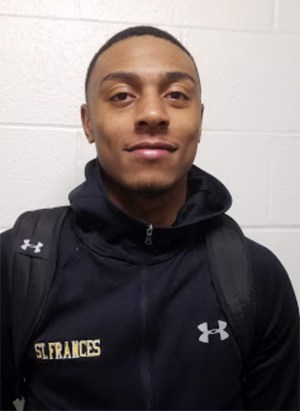 The Panthers responded, outscoring the Dons 15-5 to end the first quarter with a 17-13 lead behind hot-shooting Byron Ireland and Jamal West. The blazing comeback continued in the second quarter when St. Francis outscored Loyola 28-7 to take a commanding 45-20 advantage at the half.

Ireland scorched the nets with 15 first half points, and West added 14 with 7-for-7 shooting from the floor. The high-scoring duo each finished the game with 16 to share scoring honors for the Panthers.

St. Frances got eight third quarter points from Julian Reese as the Panthers finished the third frame with a 67-35 lead over the fifth-seeded Dons (19-12). Reese finished in double figures with 12 points for the Panthers.

Once the East Chase Street school got into gear, Loyola coach Josh Davalli knew his team would have a difficult time.

“We came out ready to play, and we got an early lead, but we just weren’t able to stop them around the basket,” said Davalli. “They hit some outside shots that opened things up inside. They played great, especially in the second quarter, when it was tough to stop them.”

On the slow start, when the Panthers fell behind by six, West said, “Our warm up wasn’t as good as we needed it to be, and coach called a time-out. He told us to get it together. This win gives us another chance to play Mount St. Joe.”

West, the BCL Player of the Year, went on to praise the play of Panthers’ senior point guard Ace Baldwin.

“Ace distributed the ball,” said West. “He had 16 assists today.”

Despite the sluggish beginning, Myles was pleased with his team’s defensive performance.

“It was a slow start, but a great effort. Our defense propelled us, and Byron (Ireland) had a great first half scoring the ball. We had a lot of scoring between him and Jamal, and Ace moved the ball around.

I told the team during that time out, to pick up the energy and not to look past this game. If we play St. Joe Sunday it’s going to be a show.”

It will be a spectacle as the two Baltimore City squads add another chapter to their rivalry Sunday afternoon. The Gaels denied St. Frances of a second straight MIAA A title with a 76-63 victory in the final last Sunday at Harford Community College.