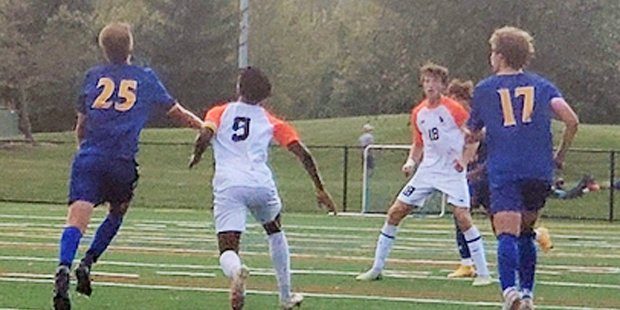 Loyola topples No. 2 McDonogh in MIAA A soccer

by Joe DiBlasi
Loyola’s young soccer team may be starting to come of age.
After an 0-3-2 start the Dons finally got in the win column with a 4-0 decision at Archbishop Spalding on Saturday and the encore was a 2-1 upset of No. 2 McDonogh, Wednesday afternoon at Meadowood Regional Park in Brooklandville.

Of course, Loyola had already signaled its ability to play with anybody when it battled top-ranked Calvert Hall to a scoreless draw a few weeks ago, but the Dons did not score their first goal until their fourth game of the season, keeping them from claiming a victory. The last three games, however, have seen the Dons score eight times as they’ve improved to 2-3-2 in the league and revived their hopes of reaching the league playoffs in November.
Defense was also a key against the Eagles, as the Dons were able to hold McDonigh’s high scoring Jacob Murrell to one goal, (which gave the Eagles a 1-0 lead 17 minutes into the game). Murrell had scored hat-tricks in three consecutive games for the Eagles, and two of his thrusts on goal in the second half were brilliantly turned back by Dons’ keeper Jordy Eckman, who registered 11 saves on the day for Coach Lee Tschantret.
“Jordy was fantastic,” said Tschantret. “It’s difficult to contain Jacob. We had defensive support near him all day, and we played well in the back. We played with a lot of character today and we are now trending in the right direction.”
Loyola’s Jackson Graham, whose goal at 19:04 in the first half tied the game, called it grit.
“We played hard all day,” said Graham. “I was fortunate to get a header on a ball that was played in by Evan (Onate) and I put it in the back of the net.”
The Dons got what proved to be the winning goal from Dan Klink, on a through ball from striker Cam Cole five minutes into the second half.
“It was a great play by Cam. He found me, and we connected in the final third,” said Klink. “It was all about our composure, and that’s what you have to do to win a game like this. The last 10 minutes were exhausting. but we were able to get back every time and stop them from scoring.”
McDonogh Coach Brandon Quaranta applauded Loyola’s effort
“They have some really good players and when they came in today they really were up for us,” said Quaranta. “I told our team after the game, that we lost the game in the first 40 minutes. We just weren’t good enough in the first half when we conceded a goal.
“I thought they had the better of it in the first half, but in the second half, it was one of our best performances of the entire season. We created a lot of pressure, we had our chances to score, but the ball didn’t go in for us. When you ‘give up’ 40 minutes in a game in this league, you put yourself in a position where you might lose by a goal, and that’s what happened to us today.”
The Eagles fell to 5-2 in the league and 6-2 overall, but they still hold onto second place in the conference behind undefeated Calvert Hall.
LOYOLA 2, NO. 2 MCDONOGH 1
MCD 1 0 — 1
LOY 1 1 — 2
GOALS: MCD-Murrell; LOY-Graham, Klink.
ASSISTS: Onate, Cole.
SAVES: MCD-Anderson 6; LOY-Eckman 11.