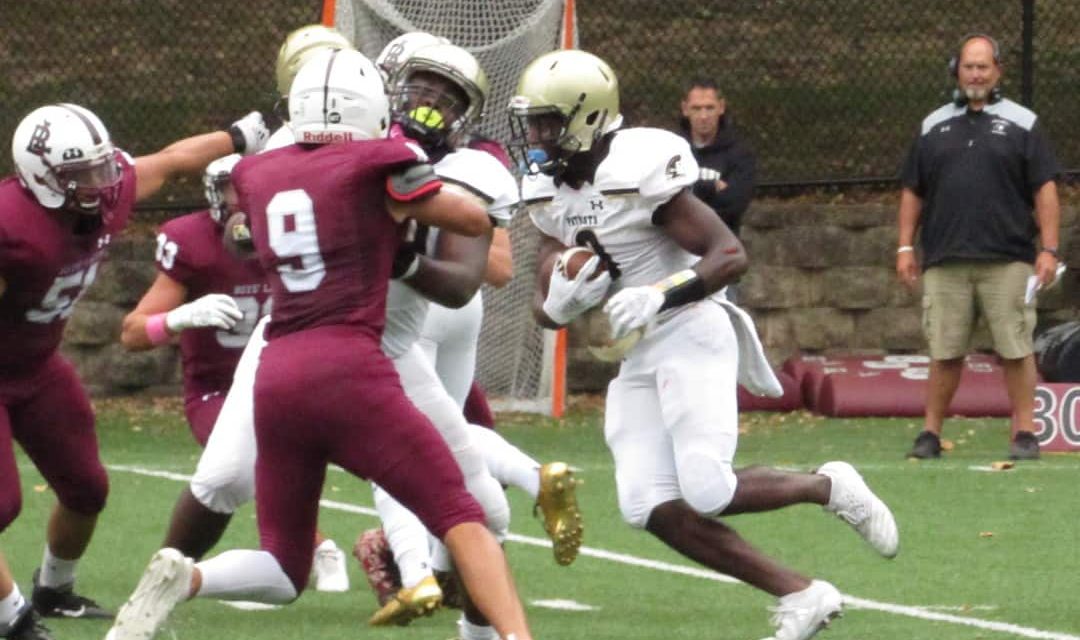 Junior running back Roman Hemby had a four-touchdown game (three rushing) in leading John Carroll to a 28-7 MIAA B Conference victory at Boys’ Latin Friday afternoon. He rushed for 101 yards.

He did not touch the ball until his team’s third offensive series, but Roman Hemby’s first carry went for a 4-yard touchdown run. It was the start of big afternoon for the powerfully built junior running back who would go on to score four touchdowns to lead John Carroll School to a 28-7 MIAA B Conference football victory over Boys’ Latin School, on the road Friday in Roland Park.

Hemby rushed 17 times for 101 yards and three touchdowns, one in each of the first three quarters and, for good measure, he added a 3-yard touchdown reception, from senior quarterback Austin Brinkman, in the fourth quarter.

John Carroll also prospered from a stellar defensive performance. The Patriots harassed BL quarterback Matthew Greaver all afternoon and forced three fumbles, recovering two of them. John Carroll also had an interception reversed because of a roughing the passer penalty.

Neither offense started well, but John Carroll capitalized on great field position on its third drive when a shanked punt gave the Patriots the ball on the Boys’ Latin 37, with 4 minutes, 39 seconds to play in the opening quarter.

Senior Caleb Atabong ran for eight yards and then went 22-yards with a catch from Brinkman, giving JC a first-and-goal at the Laker four. That’s when Hemby got his first touch and powered up the middle for the game’s first score.

“My line did a great job today,” said Hemby. “My coaches believed in me, so I just wanted to do what I had to do. I can’t take all the responsibility, but it was a great game and I feel like I did a really good job. I just have to keep progressing off of that.”

The Patriots are now 2-1, both overall and in the MIAA B. After a 31-7 home loss to St. Vincent Pallotti last week, John Carroll got the bounce back win it wanted.

“We took a tough loss last week,” said Hemby. “We all learned from it. Coach told us we had two ways we could go from it. We could either go down or we could go up, and I feel like we went up today.”

The Patriots got their second score early in the second quarter as they drove 60 yards on 10 plays. Hemby had runs of 11 and 13 yards on the march and also caught a pass for 11 yards. Atabong also came up big, with a 16-yard reception on a fourth-and-six play, giving John Carroll a first-and-goal at the five. Hemby then ran the final five yards for the score.

The Patriots, however, responded immediately. 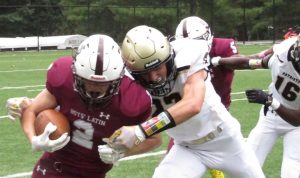 Starting their next possession at their own 28, the Patriots moved across midfield on a 25-yard pass play from Brinkman to Atabong and, a few plays later, Hemby broke a tackle and charged 29 yards for his third TD run of the day.

Boys’ Latin tried to respond and got a break when Greaver was hit out of bounds shortly after releasing a throw that was intercepted by Atabong. The penalty moved the ball to the JC 45 and junior Garrett Glatz followed with a 22-yard run for the Lakers. The Patriots defense, however, stepped up and virtually iced the contest.

First, AJ Vaughans sacked Greaver for an 11-yard loss. Under pressure again, on the next snap, Greaver scrambled but had the ball poked from his grasp and the fumble was recovered by JC’s Jaquan Corner.

“We were in that game there,” said Boys’ Latin coach Ritchie Schell. “We came back, it was 14-7 and we had some self-inflicted woulds. You can’t do that against a good team. That was tough.

“We have to secure the ball. We weren’t blocking well and they were playing great up front. They were the better team today and you have to give them credit. We’ll be alright.”

Midway through the final quarter, the Patriots scored their final touchdown. Brinkman connected on a 32-yard throw to Darrell Jackson and, later, flipped a 3-yard TD toss to Hemby.

“I thought today we played a very well rounded game,” said Brinkman. “Our defense played very well. I have a lot of respect for Ritchie and his staff. I knew they were going to be fundamentally sound and we’d have to do good things on defense to control their running game.

“It felt good to get our running game and our throwing game going. We got Roman involved a little more running the ball.”

John Carroll will have a bye next week before meeting MIAA B newcomer Concordia Prep in two weeks. Boys’ Latin will travel to St. Mary’s next Friday night to face the two-time defending league champs.