Heart break at the horn for Loch Raven girls 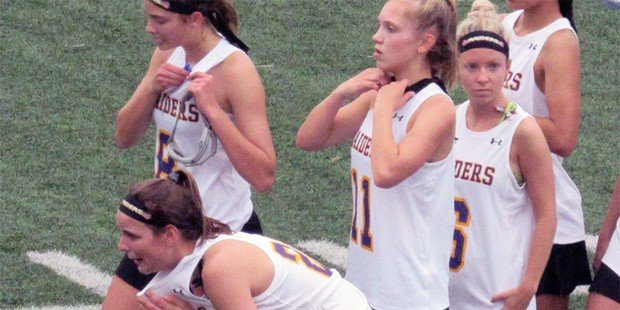 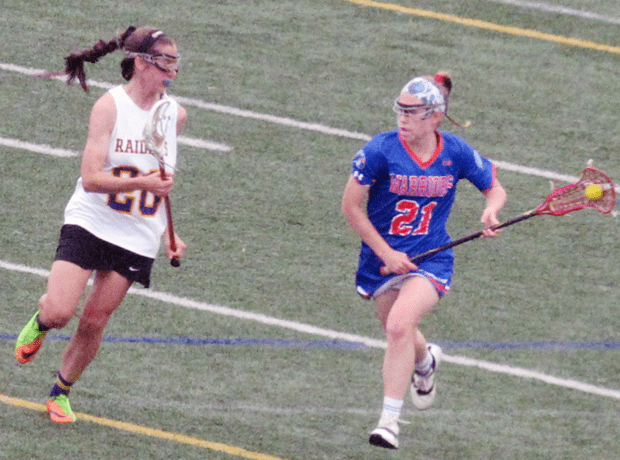 Maggie Luzier (#21), who had a hat-trick for Boonsboro, attempts to clear while Loch Raven’s Celina Baranowski applies pressure.

The Class 1A girls’ lacrosse state semifinals match-up were set on a rainy day, Saturday at Havre de Grace High School, as Boonsboro of Washington County and Harford County’s Patterson Mill each advanced with victories which could not have been more different.

While Patterson Mill invoked the running clock by late in the first half, on its way to an impressive, 17-4, rout of Maurice McDonough of Charles County, Boonsboro barely survived an upset bid by Loch Raven, edging the Raiders 9-8.

Loch Raven (5-9 overall) chased the Raiders (12-4) all afternoon, never taking a lead, but the Raiders never trailed by more than two and battled from behind to tie the game four different times, including three times in the second half.

The last tie came at the 9:08 mark of the second half when Kendel Iwanicki scored a free position tally, knotting the game at 8-8, but that was not the end of the excitement.

Boonsboro scored two straight goals to build the lead to 10-8, before Tatum Joyce netted her game-high fifth goal of the game, again on a free position, pulling the Raiders within one with 2:19 to play. Sophomore Julie Rose followed by claiming her 19th draw win in 21 attempts and the game came down to the final seconds. Rose was fouled with three seconds to play and she was awarded a free position from about 10 yards out.

Rose, who led Loch Raven with 58 goals this season, rushed forward a few steps and slung a side-winding shot that beat Boonsboro goalkeeper Saxon Knight, on the left side, but instead of ripping into the net, the ball crashed into the pipe and caromed away as the final horn sounded.

The devastated Raiders slumped in place, while the Warriors celebrated.

In addition to her five goals, Joyce had two assists. Rose had a goal and an assist to go with her excellent work with draw and she ran the field, end-to-end, all afternoon without ever leaving the game.

Iwanicki finished with two goals, while Nowowieski and Reagan Aldridge had one each.

Junior Makenna Luzier was the offensive star for Boonsboro, with four goals, while her senior sister Maggie had three goals and an assist. Caroline Brunelle added two goals and Ella Mannix had one. 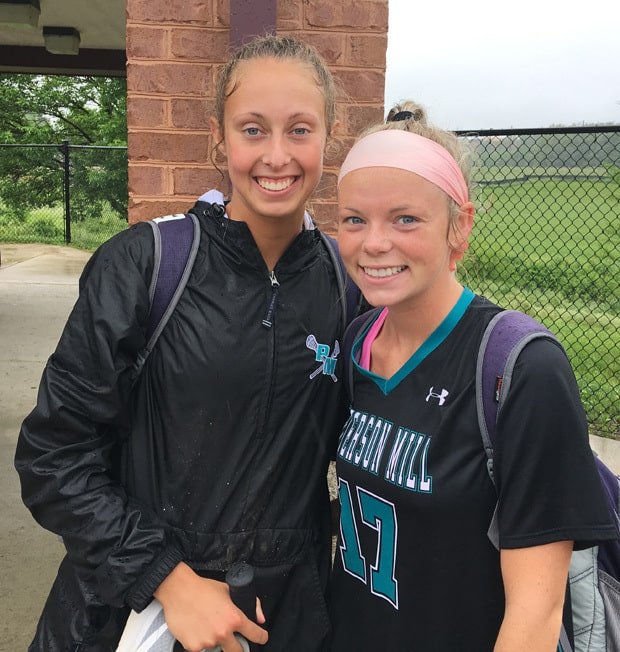 Patterson Mill (11-5), which had prom on Saturday night, drew the 10 a.m. game and the Huskies got in and out quickly.

After Patterson Mill’s Olivia Biel opened the scoring with an unassisted tally, less than two minutes in, the Rams’ got even with a goal from Ainsley Kidwell, on a free position shot, at the 22:54 mark. Unfortunately for McDonogh, the Huskies responded with eight straight goals and 11 of the next 12 to build a 12-2 lead with 2:11 to play in the first half.

In girls high school lacrosse, the running clock is put in place once a team leads by 10 or more goals. Patterson Mill never surrendered that position, significantly shortening the contest.

“We came out really mentally prepared today,” added Biel. “I think we showed up as fast and strong as we could and that’s what (produced) the result. We’re excited. Now we go to states and I think we can really pull it out, if we play like we did today, and this whole season, and play as a team, I think we’re going to get the good end of this.”

The Huskies displayed great offensive efficiency despite the poor weather conditions and their unfamiliarity with McDonough.

“The good thing is we’ve had this whole week to practice in the rain and play other games,” said Patterson Mill coach Kim Burgrasser. “This rain has been something, but I feel like we’re used to it now.

“We haven’t seen this team so we didn’t know what to expect. We talked to the girls before and we had to come out right from the first draw and play our game.”

Patterson Mill and Boonsboro will now meet for the 1A state title on Tuesday afternoon at 4 p.m. at Stevenson University.

“This is what we have been preparing for all season,” added Burgasser. “We just have to play our game and hopefully good things will come.”