For those who prefer nitpicking, about the only thing to complain about in No. 3 Howard’s convincing win over River Hill on Friday night in Clarksville was the Lions’ off-night from the free throw line, where they converted only 11 of 23 attempts.

Other than that seemingly minor flaw, however, there were highlights galore for coach Scott Robinson’s squad in what was a highly anticipated showdown, between the two frontrunners in Howard County girls basketball league play, that turned into a one-sided endeavor. 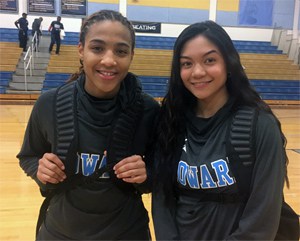 Anii Harris (left) who led all scorers with 26 points and her fellow senior guard Camille Malagar are all smiles after No. 3 Howard gained sole possession of first place in the Howard County standings with a 66-43 triumph over River Hill in Clarksville on Friday night.

“I know it sounds cliché, but this was a total team win,” Robinson said. “We got a lot of good play off the bench. I was happy with the offense and the defense. This is a tough place top play and (River Hill coach) Teresa (Waters) is a great coach.”

Early in the contest the home team was more than up to the task of pushing back after the Lions’ opening 10-3 run put River Hill on blowout alert.

Instead of capitulating, the Hawks catapulted into the lead on the strength of a 14-4 run ignited by senior guard Kennedy Clark’s 3-point play that preceded her fast break finish.

Then Anhyia Smith and Saniha Jackson, who scored 10 points each, went to work as the Hawks (13-4, 10-1 Howard) eventually claimed a 17-14 lead with 32 second remaining in the first half.

Even though Howard freshman guard Samiyah Nasir’s steal-and-finish cut the advantage at the buzzer, the Hawks still led by a point heading into the second.

The Lions countered early and often in the third quarter, grabbing the lead for good when sophomore center Gabby Scott converted a Harris feed in the paint and senior guard Camille Malagar’ steal produced another basket.

Harris then scored on consecutive plays to widen the lead to 26-19, and River Hill would never get closer than three points the rest of the way.

“We lost to them last year,” Harris remembered. “So we just had to pick up the intensity (after falling behind).”

The Hawks found that controlling the elusive and fleet Harris was a pipe dream — there was no stopping her.

And after Malagar went off in the period by nailing a couple of 3-pointers, River Hill could not recover.

“Coach tells us to keep shooting until we find our rhythm,” Malagar said.

Waters said that her team was out of sorts.

“We weren’t composed,” River Hill coach Teresa Waters said. “We played to their strengths — their guards — and din’t play to ours, which is our forwards. We weren’t patient enough. We just didn’t have it tonight.”

Waters said the problem that was Harris was unsolvable.

“With Anii, it’s attack, attack, attack,” the coach said. “She’d find a gap and go inside and deliver. And then Camille hit those big 3’s. You just can’t trade 3’s for 2’s like we did.”