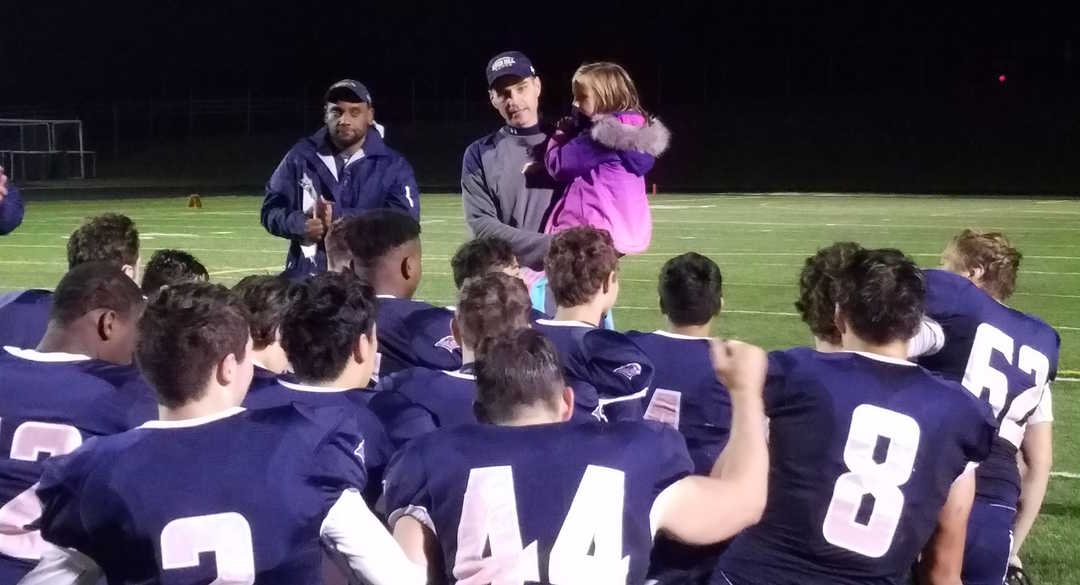 Glenelg High has been a major thorn for River Hill. The previous three seasons, the Gladiators ended the Hawks’ season in the playoffs.

Zach Igwebe and his Hawk teammates are planning for a different outcome this fall. No. 16 River Hill edged the Gladiators, 14-10, in a Howard County league contest in Clarksville Friday evening.

Igwebe answered the call for the Hawks with 21 carries for 108 yards and a touchdown. The win moves River Hill to 6-1 on the season and in HoCo play, and ended Glenelg’s win streak in league play (including playoffs) at 17.

“Since my freshman year they [Glenelg] have ended our season,” Igwebe said. “We just don’t like those guys so to finally take down feels pretty good.”

Anthony Behrman had 16 carries for 77 yards for the Hawks, the last team to beat Glenelg prior to its 17-game run. The Gladiators defeated River Hill, 35-0, in the 2A South Region final last season, en route to their first state final.

The Hawks got a huge break from their special teams in the 4th quarter Friday. With Glenelg up 10-7, Nick Laumann blocked a Glenelg punt attempt, giving River Hill its best starting position of the night at the Gladiators’ 30-yard line.

Igwebe and Behrman wore down the Glenelg (4-3, 4-1 Howard) defense as the two combined for 24 yards on the drive. The Hawks reclaimed the lead as Igwebe powered his way down to the Glenelg 1-yard line, setting up Keegan Remick’s quarterback sneak with 8 minutes, 31 seconds left in regulation.

Glenelg went 3-and-out on the ensuing drive and the Hawks regained possession at their 37 with a little over 6 minutes left in regulation. With Behrman and Igwebe rushing for 20 yards on the drive, River Hill ate up the remaining time, capped wih Igwebe’s 5-yard run on 4th down with 44 seconds to play.

“We didn’t want to give them ball back, they are great team, well coached team and for us to pound on them at the end, that was great to see,” River Hill coach Brian Van Deusen said.

“I knew that had to pick up that first down and it felt great when I did,” Igwebe said.

Glenelg kicker Chris Retzbach’s 44-yard field goal attempt hit the crossbar and over the post, putting the defending Howard County champions in front 10-7 with 3 minutes left in the third quarter.

“It’s crazy how things have happened in these matchups over the years,” said Van Deusen, whose team’s only loss came against Marriotts Ridge in a game they led late in regulation before falling in overtime. “That was a 44-yard field goal and you don’t see that much in high school football. We knew that we were moving the ball and just kept hurting ourselves with penalties, once we cut that down we could put a nice drive together.”

The Hawks had a drive stalled short of midfield midway in the second, and punted to ball to the Gladiators who took over at their own 31. Three plays later Glenelg quarterback Mason Davis (4-for-10, 119 yards and a touchdown) connected with Robbie Tolbert on a play-action pass. Tolbert slipped past two River Hill defenders and raced down the right side for a 55-yard touchdown reception, tying game at 7.

River Hill closed the 1st quarter with an 11-play, 58-yard drive, capped with an Igwebe 3-yard jaunt up the middle. The Hawks didn’t attempt a pass during the possession.

“This was a tough one, but it is what it is, we just got to bounce back next week,” Glenelg coach Tim Cullen said.