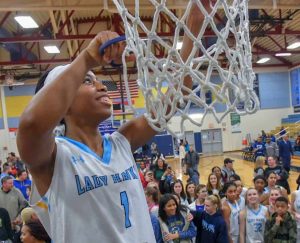 River Hill’s Kennedy Clark cuts a piece of net during the net cutting ceremony following the Hawks’ victory in the Class 2A South Region final Saturday. The Hawks defeated Calvert County’s Calvert, 54-40, for their first state Final Four berth since 2013.

River Hill girls basketball coach Teresa Walters said her team is getting use to winning. Once among the area’s elite programs, the Hawks have been in a dry spell the last couple of seasons.

River Hill has shown modest improvement in each game this season. Now, they’re two victories away from a state championship.

River Hill claimed the Class 2A South Region title with a 54-40 victory over southern Maryland’s Calvert. Junior guard Kennedy Clark scored a game-best 23 points and Emily Masker and Saniha Jackson each added 11 for the Hawks (18-7 overall)

For the first time since 2013, River Hill is in the state Final Four. The Howard County school will take on Hereford in a 2A semifinal Friday afternoon at Towson University’s SECU Arena.

The Clarksville school can thanks another dogged defensive effort and breakout showing from Clark. Clark scored her 23 points over the final 21 minutes including five 3-pointers.

“It looked like it was going to be really close until Kennedy started to hit from the outside,” said Waters. “This group is still getting accustomed to winning. They tend to play not to lose.”

She connected on four consecutive three-point field goals during a three-minute span in second quarter then added her fifth late in regulation.

Clark said it started with defense.

Clark reversed the close course of the contest by nailing four three-point field goals in as many attempts that vaulted the Hawks to a 29-17 lead. Masker did much of her damage inside against the Cavaliers, but she also nailed a three-pointer in the fourth quarter as the Hawks sealed the verdict.

River Hill led 32-22 at the intermission and 44-32 heading into the fourth quarter. The Hawks were able to put the game away, opening the final frame on a 10-0 run as Masker nailed her lone 3-pointer of the night and Clark added the next seven points, capped by her fifth trifecta.

After a run of five state Final Fours (won 3A title in 2006) in nine seasons, River Hill hasn’t been back since losing to Aberdeen in the 2013 3A final. Last season marked River Hill’s first winning season since 2013-14.

“This is definitely something new for us. We had been losing in the first and second round of the playoffs the other years,” said Masker. “This is going to be an important week for us to get ready for Towson on Friday. We have four days to get ready.”