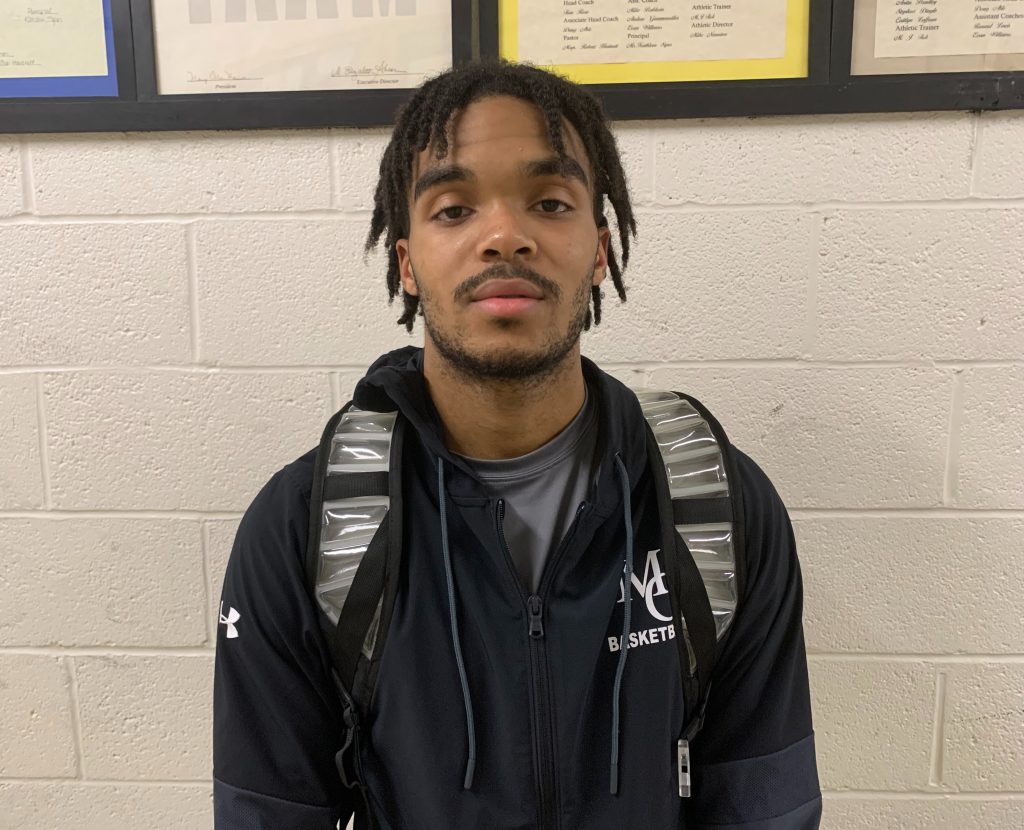 Deon does it again: Mount Carmel senior Deon Perry came up big again for Mount Carmel boys basketball team Wednesday. Perry finished with 35 points, including a jumper with 2.1 seconds remaining in regulation, giving the No. 3 Cougars a 78-77 victory over eighth-ranked Loyola Blakefield in a MIAA A Conference quarterfinal contest in Essex.

The senior’s demeanor rarely changes, whether he’s draining deep 3-pointers (he had seven Wednesday) or his team is in crisis which the Cougars were knee-deep in after blowing a 25-point lead.

So when a classmate ran up to him on the court moments after his jumper gave the No. 3 Cougars a 78-77 victory over the eighth-ranked Dons, Perry did something very rare.

He smiled. It was a collective sigh of relief for Mount Carmel (24-6 overall), which survived a valiant Loyola comeback to advance to Friday’s MIAA A final four.

The Cougars will play No. 11 Gilman School, which capped arguably the craziest night in MIAA A playoff history with a stunning second half rally to knock off No. 2 St. Frances Academy in East Baltimore, Friday evening at 6 in Essex.

Mount Carmel, widely projected for a trip to East Chase Street for a semifinal matchup with St. Frances, instead will be back in its tiny Essex gym with an opportunity to advance to Sunday’s A title game at APGFCU Arena.

Perry kept the Cougars’ hope of a first A championship alive, dropping a short jumper with 2.1 seconds left in regulation, capping a 35-point effort by the Loyola University recruit.

Brown gave Loyola a 77-76 lead with 10 seconds left, getting a pass from Jayden Moore and laying the ball off the glass. The Dons called timeout with 8.7 seconds remaining to set up their defense.

Perry got the inbounds pass from sophomore Andrew Dixon sped past a falling Loyola defender and got just inside the free throw line. His jumper fell cleanly through the net.

Mount Carmel coach Trevor Quinn said it was another day at the office for Perry.

“He’s been a starter on varsity since the day he walked in the door and I think, at this point, he’s seen just about everything and I don’t think anything kind of throws him off anymore,” said Quinn.

The lead at half was 51-37, but Loyola, with a combination of tempered breaks to the basket and perimeter shooting, was steadily working its way back into contention.

When Drew’s 3-pointer went through the net early in the fourth, the Dons had their first lead, 62-61. Loyola advanced the lead to 69-64 on Moore’s layup with 5:07 left in the regulation.

Mount Carmel regained the lead, 70-69, on a basket from Perry. The lead switched hands seven times before Moore, driving the baseline, found a cutting Brown, giving the Dons’ lead.

Perry, who scored six points in the fourth, secured the ninth – and final – lead change.

“We try to stay together throughout, so that we don’t lose control of the game,” Perry said. “I feel if we would have got out of control, they would have got more points because they’re a pretty good team and they run their sets really well.”

Senior post Gavin Walsh had 13 points for Loyola, whose final attempt fell short at the buzzer, and Moore finished with 10. The Dons lost twice to Mount Carmel during the regular season.

The Towson school, which took St. Frances to overtime before falling last week, was again resilient Wednesday, nearly completing one of the biggest comebacks in recent MIAA A playoff history.

“We’re not going to stop fighting, we’re going to keep on fighting to the end,” said Dons coach Josh Davalli. “We dug ourselves an early hole and credit Mount Carmel, they shot the ball really well. I thought we played really well in the last three quarters. We did the things we needed to do…but you just can’t dig that big of a hole.”

After surviving Loyola, Mount Carmel next gets Gilman, looking for some more postseason magic after Wednesday’s upset decision at St. Frances. The Cougars won both meetings, 75-73 and 78-69, during the regular season.

“That’s going to be a tough game…this game prepared us for the next game,” said Perry.