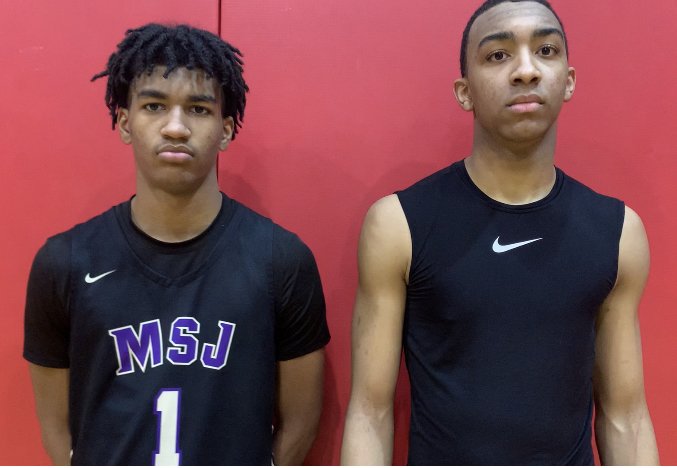 Ace Valentine (left) and Bryson Tucker helped continue Mount St. Joseph basketball’s winning surge Thursday. Tucker had a team-best 20 points and Valentine scored 10 of his 16 in the final quarter as the No. 4 Gaels top second-ranked Archbishop Spalding, 70-55, in a MIAA A Conference/Baltimore Catholic League battle in Anne Arundel County.

No. 4 Mount St. Joseph ran its winning streak to six with a 70-55 victory over second-ranked Archbishop Spalding in a MIAA A Conference/Baltimore Catholic League match in Severn Thursday evening. Sophomore forward Bryson Tucker finished with 20 points for the Gaels (18-4 overall), and Amani Hansberry had 13 points and 24 rebounds.

The Irvington school led wire-to-wire, closing out the Cavaliers in the fourth quarter to claim sole possession of the top spot in the MIAA A Red Division (8-1). The win advanced the Gaels to within a half-game of the second (7-3) in the BCL.

After an impressive second half in disposing of No. 3 Our Lady of Mount Carmel Tuesday, Mount St. Joseph followed with a quality road effort Thursday against Spalding (17-4, 7-2 MIAA A Red and BCL), which didn’t have reigning BCL Player of the Year Cam Whitmore because of an ankle injury.

“Spalding is a really good team. This time of the year you’re dealing with guys injured, COVID…Cam is arguably the best player in the league,” said Clatchey. “We did what we had to do.”

“It doesn’t matter who they have out there, we’re going to play our hardest,” said Valentine.

The Gaels scored the first nine points and led by as many as 16 points in the opening half. They had an 11-point advantage late in the third before Spalding charged to within 45-39 entering the fourth.

St. Joe answered with an 8-1 run, featuring a Valentine 3-pointer and a dish to Amani Hansberry for a score. Hansberry got a defensive rebound and sent an outlet to Valentine.

Valentine, who had 10 of his 16 points in the fourth, quickly gave the ball up to Tucker, who missed a dunk but recovered and scored, pushing Mount St. Joseph’s lead to 53-40 with 6:15 left in regulation.

Clatchey implored his team to move the ball in the pre-fourth quarter huddle.

“That’s been a problem for us and eventually we’re going to learn and win or learn a hard lesson and lose,” said Clatchey.

“We had a couple of ‘Isos’ and some miscommunication on fastbreaks and the press,” said Tucker. “He (Clatchey) just wanted us to slow down and get into the offense.”

Tucker, who played on the U.S National Under-16 squad during the summer, gave the Gaels their largest lead, 62-43, with 3:28 left in the fourth on a turnaround jumper off a pass from Hansberry.

Austin Abrams finished with 12 points for the Gaels, who’ve been reenergized since a double-digit loss at BCL rival St. Maria Goretti a couple of weeks ago.

“I think our defense has improved. I think some guys have settled into their roles,” said Clatchey, who didn’t have key reserve DJ Wingfield Thursday.

“It’s tender,” said Pratt of the McDonald’s All-American’s condition. “I think he’ll be out a week.”

The Cavaliers came out slow Thursday and trailed by double-digits for most of the first half. Down 45-32 midway in the third, Spalding got a 3-pointer from Pennick, two free throws from Scott and a Pennick basket off an offensive grab to move into striking distance entering the fourth.

The Cavaliers got no closer.

“We didn’t make any shots early…they (Mount St. Joseph) was ready to fight and we weren’t,” said Pratt. “We’’ll bounce back.”

“Glad to walk out here with the win,” said Clatchey, “and guess what, we get to play tomorrow.”