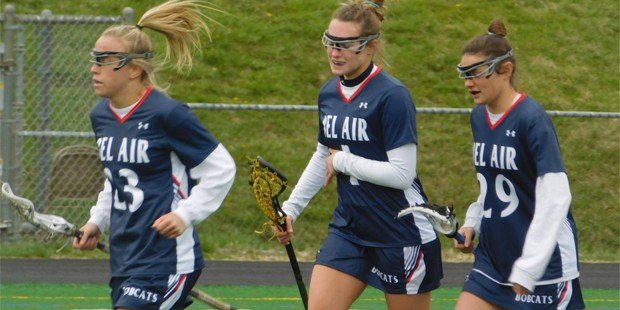 Henry and Hillman also collect hat-tricks for No. 17 Bobcats

With the post-season drawing close, the No. 17 Bel Air girls’ lacrosse team welcomed in No. 15 Westminster, Wednesday evening, for a Top 20 battle that helped sharpen both teams for their playoff runs.

Led by five goals from Maggi Hall and pair of hat-tricks, the host Bobcats claimed the victory over the Owls, 13-9.

It was a huge night for Hall, who  added a pair of assists for a seven point evening. Julia Henry and Elizabeth Hillman were also productive for Bel Air (11-2), scoring three goals each.

Lauren Asher and Anna McQuay were the other goals scorers for the Bobcats, while Keeley McHugh had two assists and Henry, Gabi Hall, who was named an Under Armour All-American this week, and Gabby Trzeciak had one each.

Westminster (11-3) spread out its scoring a little more evenly, with Anna Ruby scoring three to lead the Owls and Chloe Sedlar netting two goals. With one goal each were Hannah Dintino, Madi Macera, Sydney Popielski and Lauren Saltz. Hannah Sinto and Sedlar each had an assist.

In goal, Riley Patrick had seven saves for Bel Air and Sara Tyssowski made six stops for Westminster.