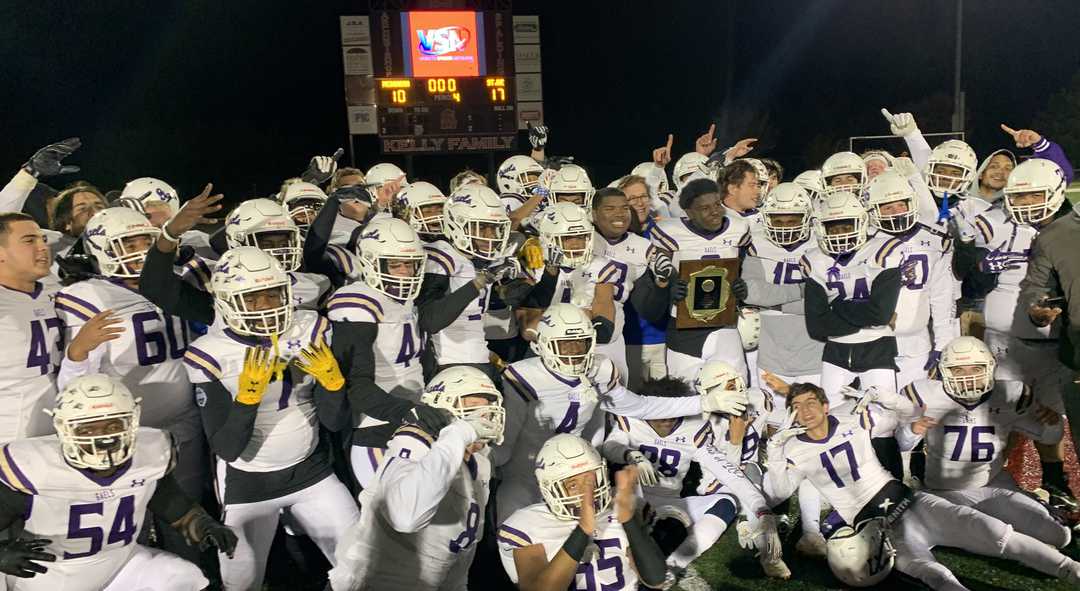 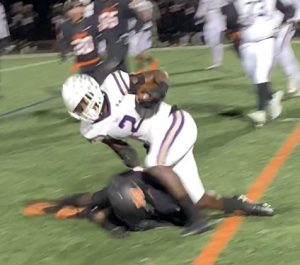 Mount St. Joseph running back Marlowe Wax prepares to go down after absorbing a hit from McDonogh’s Dante Trader during Saturday’s MIAA A Conference football championship game. Wax rushed for 122 yards and a touchdown, and caused a fumble resulting in a touchdown as the No. 3 Gaels won the title with a 17-10 over the second-ranked and previously undefeated Eagles at Archbishop Spalding’s Whittles Field.

Though offense has long been its calling card, Mount St. Joseph’s football ascension into a MIAA A Conference title contender this season has been because of defense. Saturday night, it took the Gaels finally over the championship threshold.

No. 3 Mount St. Joseph defeated second-ranked and previously undefeated McDonogh School, 17-10, in the MIAA A title game in front of an estimated 1,500 at Archbishop Spalding’s Whittles Field.

For the first time, Mount St. Joseph stands alone atop the area’s toughest conference. It’s the first MIAA A championship since 2007 when the Gaels shared the title with Loyola Blakefield. The Irvington school shared titles in 1996 (Loyola and St. Mary’s) and 1995 with St. Mary’s.

The Gaels, behind a relentless defensive effort, left no doubt on chilly Saturday night in Severn.

“It was an old school knock down dragged out football game,” said Mount St. Joseph coach Rich Holzer. “Who’s going to win the trenches, make less mistakes on offense. Our defense did a fantastic job and our offense did just enough to win.”

“It’s been blood, sweat and tears all season,” said Wax. “For my last ride with MSJ, it’s a great feeling.”

It was a virtuoso performance by Wax in his final game in a Gael uniform Saturday. The Syracuse University commit rushed for 122 yards on 25 carries and caught four passes for another 23.

As a linebacker where’s slated to play for Syracuse next season, Wax totaled 14 tackles and a 1 1/2sack. The 6-foot-2, 230-pounder authored the arguably the game’s biggest play.

With the Gaels trailing 7-0 in the second quarter, Wax blitzed McDonogh quarterback Preston Howard inside the Eagles’ 20-yard line. Wax stripped the ball from Howard and the ball rolled into the end zone where junior linebacker Brandon Fique fell on it for a touchdown with 7:53 left before halftime.

“My coach on the sideline told me to go. I made the running back missed me on the block and saw Preston was about to throw,” said Wax. “I just tried to get the tackle and I stripped him.”

“He’s a difference maker. You can tell when he’s not out there what a difference it is,” said Holzer. “In my opinion, he’s the best in the state.”

The Gaels went ahead late in the first half as Scott Martin hit a 34-yard field goal with 2:57 left. McDonogh moved the ball to start the second half, but Mount St. Joseph’s defense made another game-alternating play.

Late in the third, Jenner was intercepted by Gaels defensive back Jordon Oliver. Mount St. Joseph went 65 yards in seven plays with Wax covering the final 20 yards, extending the lead to 17-7 with 11:15 remaining in regulation.

McDonogh, courtesy of a taunting penalty against the Gaels, got into Mount St. Joseph’s territory on the ensuing drive. Senior Harrison Beattie connected from 43 yards, bringing the No. 1 seed Eagles to 17-10 with 8:22 to play.

McDonogh got the ball back inside the Gaels’ 50 with 4:43 left, but, junior defensive back Terry Hardy knocked away a Jenner pass on 4th-and-4. The Owings Mills school regained the ball, again at midfield, with 3:20 to play after using its remaining timeouts on Mount St. Joseph’s previous possession.

After a seven-yard pass to Dante Trader, Jenner was flagged for intentional grounding after tracking down a bad snap and throwing the ball away. Jenner connected with Trader for 24 yards, leaving McDonogh with 4th-and-8 with 1:49 remaining.

The Gaels can thanks their defense which allowed 47 points this season in MIAA A play. Junior defensive back Terry Hardy had two sacks Saturday with Fique posting a sack along with the fumble recovery score.

“We wasn’t as much as a family as we are now…we’re playing for each other,” said Oliver. “It’s chemistry.”

“They were juniors, sophomores and freshmen on the field last year. Now, they’re seniors, juniors and sophomores,” said Holzer. “A lot of it is growth, but they’ve gotten bigger, stronger and faster in the weight room.”

After beating Mount St. Joseph on a late score in regulation a few weeks ago, McDonogh (11-1) was unable to complete its first perfect season since winning the MIAA A title in 2013.

“We had some kids get banged up, but they kept fighting and that’s all you can ask for,” said Sule. “Mount St. Joseph was the better team and deserved it.”

The Gaels, who didn’t have standout junior wideout Dont’e Thornton (shoulder) Saturday evening, have their entire passing attack scheduled back next season along with Fique, Schulze and Blake Wisnauskas highlighting the defensive returners. 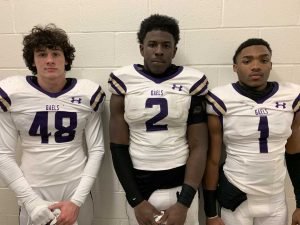 Holzer, who came to Mount St. Joseph several years ago after a successful stint at Meade, had a final talk with his seniors after Friday’s practice.

“I said five years when St. Joe’s was kind of building and I said trust me and come here and we’re going to build this thing and win a championship,” said Holzer, who replaced Blake Henry (now at Potomac School in Virginia) in 2015. “I thanked them because they had enough faith in me as a coach to stick with it and continue to build upon what Coach Henry had done and build this thing into a champion.”