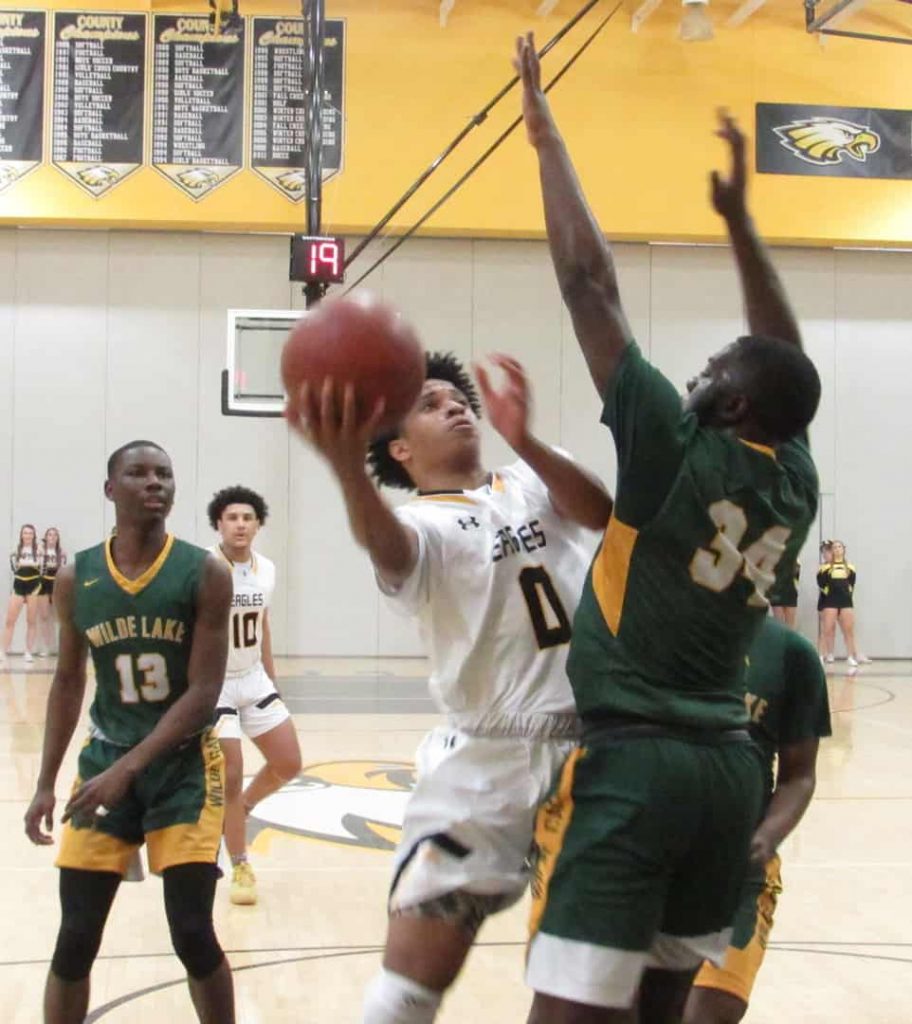 Northeast’s Jaylin Albury heads up to the basket as Wilde Lake’s Kwaku Boampong defends during Saturday’s Class 3A state boys basketball quarterfinal contest in Pasadena. Albury finished with a game-high 33 points as the No. 16 Eagles advanced to their first state Final Four since 1983 with a 68-60 victory over Wildecats.

Cradling the game ball under his arm, Jaylin Albury mingled with friends and parents on Northeast High’s gym floor early Saturday evening following the Eagles’ victory in the Class 3A state boys basketball quarterfinals. It was an intimate gathering, not a free-for-all celebration as school officials didn’t allow a near capacity audience to storm the court.

When told it was his last game at the Pasadena school, Albury was taken aback.

“This probably won’t hit me until I get home,” said Albury, a senior. “When you said this was my last game, I’m going to start think about it a little bit more.”

Albury’s final performance was one for the ages, and the No. 16 Eagles are headed to the state Final Four after a 68-60 victory over Wilde Lake. Albury finished with 33 points for Northeast (21-4 overall), and junior post Stephen Haley added 11 points.

The Anne Arundel County school shook off a slow start, building a 16-point second half advantage before weathering a late Wildecat push to advance next week’s state 3A semifinals. The Eagles will play three-time defending champ and third-ranked Poly, Thursday at the University of Maryland.

The last time Northeast played on the final week of the public season was 1983 – the last time the Orioles won the World Series. Ronald Reagan was President and Cabbage Patch Dolls were a craze.

Northeast coach Roger O’Dea, who returned to his alma-mater a decade ago, was emotional.

“This is my home. I love Pasadena,” said O’Dea. “My dad said when you pass away you can’t take nothing you, but if you can leave memories and give back to our community, people will remember you forever. That stuck with me.”

O’Dea thought back to his 2015 squad, his best group before this season’s breakout, which season ended in the Class 3A Sweet 16 with a two-point loss, courtesy of a technical foul in the final seconds. Last season, Northeast lost to eventual state finalist Reservoir in the 3A East Region final.

Mitchell dropped a fourth dagger for a 21-12 Wildecat advantage. But the Eagles, who played zone in the first, switched to man-to-man and started pressuring the ball.

Albury put Northeast ahead for the first time with two free throws following a Wilde Lake technical foul. followed with a runner as the Eagles claimed a 36-30 halftime lead.

“We decided to pick up the pressure and not let them get the shots they wanted,” said Northeast junior guard Trent McNeill.

“We just had to finish, the ball was going in-and-out, but we had to get to three-pointer shooters,” said O’Dea. “Our zone was working, the problem was we were giving up second opportunities.”

Northeast opened the second half with a 10-1 run, capped with an Albury pull-up jumper, for a 44-31 advantage. The 5-foot-10 guard began taking over, scoring nine points, including a successful drive to the basket with two seconds left, putting Northeast in control, 53-39, after three quarters.

Darrell Sheppard’s basket gave the Eagles their largest advantage, 60-44, with 3:39 left in regulation, but the Wildecats rallied. The Columbia school pulled to 62-55 after two free throws from Brince Shelton with 1:13 to play.

The Wildecats’ Cam Burris blocked Albury’s shot in the paint, and Shelton was fouled. Shelton missed both free throws, and McNeill hit one of two, putting Northeast up, 63-55.

Mitchell finished with 21 points for Wilde Lake (17-9), hitting one 3-pointer in the second half. Shelton had 16.

“We couldn’t really get into a rhythm,” said Wildecats coach Deon Wingfield, whose team managed 13 free throw attempts, compared to Northeast’s 39. “We knew Albury was a focal point and he stepped up like a senior supposed to do.”

Northeast has climbed several obstacles in its transformation from afterthought to league champion to now a state finalist. The Eagles will have a proverbial mountain to scale next in nationally-ranked Poly, which hasn’t lost a postseason match in nearly four years.

The Eagles are looking forward to playing in its first state semifinal in 37 years Thursday afternoon.

“We’re on house money, we’re going to go out there and have some fun,” said O’Dea. “Do we want to win the game? Yeah…It’s time for my kids to get noticed by these colleges. We’re going to have fun.”

“No matter what we got to run through that brick wall,” said Albury. “I got my guys with me and we’re playing to win.”