Grizzlies strike quickly in a win over No. 1 Spalding 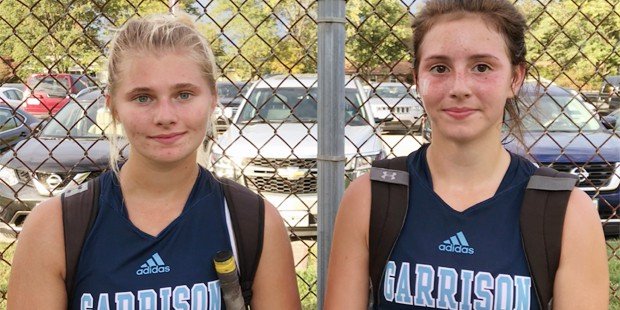 Early goals propel No. 3 Garrison Forest in a showdown of IAAM A powers

Garrison Forest’s No. 3 field hockey team didn’t take long Thursday to put a dent in No. 1 Archbishop Spalding’s goal of avenging its loss to the Grizzlies in the 2019 IAAM A Conference championship game.

The Grizzlies needed less than four minutes to take the lead and scored twice in the first quarter. Ella Kokinis scored on a penalty stroke and Dani Mendez scored on a breakaway to spark a 3-1 victory in the clash of teams which entered unbeaten in the A Conference.

The win was especially sweet for the Grizzlies whose rivalry with the Cavaliers has grown into one of the most competitive local field hockey rivalries in recent years.

“It’s huge,” said Grizzlies senior defender Cameron Medinger. “It’s been going on for a while. It’s always the big game we look forward to and the one we’re most nervous about, because we know on any day, either of these teams can win because we’re both great teams.”

In their last 12 games dating back to 2013, the Grizzlies won seven times. Eight of those games were decided by one goal and five went to overtime.

“[They’re] a very fast team, a very talented team and it’s a big rivalry especially because we beat them in the championship, 2019, so that rivalry will always stay,” Mendez said.

In their first eight games, the Cavaliers (8-1, 4-1) had allowed just five goals, but the visiting Grizzlies (8-4, 6-0) got the jump on them right away Thursday with two penalty corners in the first four minutes. Spalding fought off both with goalie Ruby DeFrees making a lunging stick save against Mendez on the first corner.

But just after the second corner, the Grizzlies attacked again and a shot that would otherwise have scored hit a defender’s leg, resulting in a penalty stroke.

Kokinis fired the ball shoulder high into the left side of the cage just out of reach of DeFrees’ stick.

The Cavaliers threatened late in the quarter, but Grizzlies goalie Alyssa Klebasko made two saves to preserve the lead.

Spalding had a penalty corner in the final minute, but the Grizzlies poached a crossing pass, setting off the fast break that put four Grizzlies ahead of the Cavaliers defense. Mendez scored one-on-one with DeFrees and the Grizzlies led 2-0 lead after one quarter.

“We just came out really hard and that’s what we’ve been preaching all season, just coming out really hard and catching teams off guard, so we did that today,” Garrison coach Malcolm Belin said. “Really, really good play by our entire team. Everyone who got in played great. Two early ones is pretty nice and adding a third is always great too.”

The Grizzlies made it 3-0 with 12 seconds left in the first half when DeFrees came out to play Mendez, who slipped the ball past her toward the right post. Sophie McAvoy punched it in.

For Garrison’s defenders facing a Cavaliers team that had scored 44 goals in their first eight games, the early lead helped them relax a bit.

“It’s a big relief,” Medinger said, “because once you have that advantage and that edge you’re a little bit more free to kind of be more adventurous and do what you want on defense and give some better balls up the field, because you’re not afraid of somebody coming in with a breakaway and getting an easy goal and suddenly you’re tied.”

Led by Medinger and Klebasko, with 10 saves, the Grizzlies played an exceptional game in the back and the midfield with strong performances from outside backs Anne McAllister and Catherine McAllister, center midfielder Mendez and outside midfielders Morgan Qualls and Riley Schmidt.

The Grizzlies’ four losses came against No. 2 Severna Park, 2-1 in overtime, and to some top teams in Pennsylvania and New Jersey at the MAX Field Hockey National Invitational near Philadelphia Sept. 24-26. In winning all six A Conference games, they’ve allowed just three goals.

The Cavaliers scored one of them in the third quarter Thursday when Ally Keith fired a shot, assisted by Bridget Donovan, past Klebasko. They had a handful of other opportunities to score, especially in the second half. After allowing Keith’s goal, Klebasko held them off with several saves, including one with 20 seconds left in the third quarter and another, a lunging stick save, with three minutes left in the game.

“This will be good for us,” Cavaliers coach Leslee Brady said. “We were kind of steamrolling everybody and this lets us know there are other people in this league that are just as good as we are. It exposed a couple things we need to work on, but we outplayed them for three quarters. We gave them three goals early and came back and had plenty of opportunities, it just wasn’t our day.”

Pictured above: Garrison Forest seniors Cameron Medinger (left) and Dani Mendez led the No. 3 Grizzlies to a 3-1 victory over No. 1 Archbishop Spalding, Thursday. Medinger led a stellar defensive effort against a Cavaliers team that had score 44 goals in its first eight games and Mendez scored a goal and had an assist.