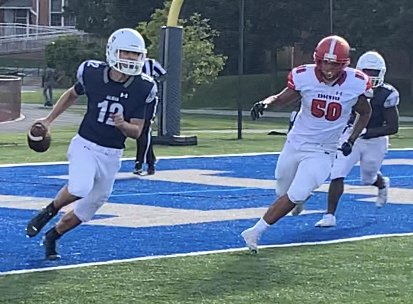 Gilman quarterback Matthew Parker is chased by Edgewood defensive linemen Avon Griffin during the first half of Friday’s non-league football game. The Greyhounds outscored the Rams, 29-0, in the second half to take a 39-18 victory in Roland Park.

Trailing at halftime Friday afternoon, Gilman School football team was rather fortunate, considering it was outplayed in the first half by visiting Edgewood, which turned the ball over inside the Greyhounds’ five-yard line.

Given a second chance, of sorts, Gilman made the most of it. The Greyhounds rallied in the second half for a 39-18 victory over the Rams at Edward V. Brown Field in Roland Park.

Senior running back Ke’yon Torain was the centerpiece of Gilman’s dynamic second-half offense, finishing with 17 carries for 133 yards and three touchdowns while quarterback Matthew Parker recorded 131 yards passing for two touchdowns to lead the Greyhounds (1-0 overall) to the victory.

“They (Edgewood) came out in some sets that we had not worked on barely at all or maybe just a little bit… so give them credit for that as coaches – they got us early with some things we weren’t really ready for,” Gilman coach Rick Bach said, crediting his team with making plays in the second half that he expected them to make early on.

“In the third quarter, we played pretty well on defense. We were wrapping up better, we were tackling and we blew less assignments. We didn’t really have the blown assignments that really bit us in the first half.”

Edgewood quarterback Larry Briceno-Lopez completed a 41-yard screen pass to Timi Oyekunle for a touchdown about four-and-a-half minutes into the game to put the Rams up 6-0 after the first, and at the top of the second Briceno-Lopez found receiver Jahmir Torres for a 35-yard touchdown that put them ahead 12-0.

Following a 32-yard field goal by Gilman kicker Daniel Huff, Dajaun Lane caught a 50-yard touchdown pass from Parker to close the deficit to 12-10. The Rams responded just before the half, with Oyekunle this time scoring on a staggering 40-yard run.

The Rams held an 18-10 advantage at intermission, but their lead was short-lived as Gilman scored four unanswered touchdowns in the second half. Additionally, Edgewood was riddled with injuries – from quarterback Briceno-Lopez to running back Jonathan King and a few others – which wound up having an adverse effect on the team’s rhythm.

Parker connected with Avery Jones-Allen for an 18-yard score, then the two linked up for a two-point conversion to tie the game less than a minute into the third quarter. After getting a stop on defense, Torain culminated Gilman’s next drive with a 12-yard carry into the end zone.

From that point, the Greyhounds sustained that momentum for the remainder of the evening. Gilman continued running its offense through Torain, who added two more touchdowns in the fourth: one on a 10-yard run and the other on a six-yard run.

“Going into halftime, we were all frustrated. The O-line really wasn’t doing what they had to do and we all sat down and talked like, ‘We can beat this team,’ then came out in the second half and the O-line blocked, and I was able to bust a few runs,” Torain said.

It was just our mentality. We knew we could beat them, we just had to execute everything.”

It was the first game for Edgewood coach Keith Rawlings, who previously led John Carroll School to the MIAA B Conference championship in 2017. Rawlings, a 1983 Edgewood graduate, was hired in 2020, but the Rams didn’t play last fall because of the COVID-19 pandemic.

Running back Ke’yon Torain took over in the second half for Gilman with three second-half touchdowns. The senior finished with 133 yards rushing.

The Rams didn’t have Briceno-Lopez in the second half. Rawlings said he sat his starter because he felt dizzy after a hit in the first half.

“They (Gilman) came to play in the second half. On the physical side, they may have won that battle in the second half,” said Rawlings. “You gotta win that third quarter and that carries you through, and that’s what they did.”