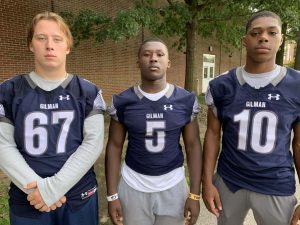 It took half the season before Gilman School football recorded its first victory last year.

It won’t be the case this year.

The Greyhounds kicked off their 2019 campaign with a 47-18 victory over Prince George’s County’s Riverdale Baptist at Sotir Field in Roland Park. Sophomore running back Ke’Yon Torain rushed for 200 yards and scored four touchdowns for Gilman, and junior Ravon Lane added an offensive and defensive score.

The Greyhounds accounted for the game’s first 27 points, paving the way to their first season-opening victory since 2016. Once the dominant entity in the MIAA A Conference, Gilman finished 1-9 last season with its lone triumph coming against Western New York’s Cardinal O’Hara in mid-October.

On an unseasonably comfortable Saturday, the Greyhounds signaled what they hope is a return to respectability.

“It’s definitely a step forward,” said Gilman second-year coach Nick Bach. “It will help with the building process knowing they can beat people. When you come off a tough season, everyone’s kind of wondering.”

“We scrimmaged them last year and it was 0-0 and everyone didn’t feel good about it,” said Greyhounds two-way linemen Gage Crites. “The mentality from today we definitely want to carry it the rest of the season.”

Crites, who recorded 2 1/2 quarterback sacks Saturday, is one of six seniors (Stefan Gladis, Devin Grinnage, Adam Knorr, Tyler Martire and Billy Spilman) on Gilman’s varsity roster. The Greyhounds will have 18 freshman or sophomores on the field this season.

Bach knows there’ll be growing pains the next few months.

“There’s going to be a lot of learning from the film because there were a lot of young guy mistakes,” said Bach. “We’re probably the youngest team in the league.”

The Greyhounds appeared to have promise, starting with Torain, who scored on runs of 15, 14, 40 and 76 yards and hauled in an 8-yard scoring pass from freshman quarterback Matthew Parker.

“We had to set the foundation for the next game. Everybody thought we were the underdog,” said Torain, who carried the ball 18 times Saturday. “We proved we’re not bad.”

Torain broke free on the second play from scrimmage in the second half for the 76-yard score and a 27-0 Gilman advantage. Riverdale Baptist, coached by former NFL running back and University of Maryland great Lamont Jordan, got its first score, but the momentum didn’t last long, thanks to Lane.

In its first varsity game, Lane returned the ensuing kickoff nearly 50 yards to Riverdale Baptist’s 35-yard line. On the next play, Parker (8-of-12, 76 yards) went play-action and hit an open Lane down the middle for a 35-yard touchdown.

On the next play from scrimmage, Parker stepped in front a Crusader pass in the flat and went untouched 50 yards to the end zone, giving the Greyhounds a 40-6 advantage.

“The coaches prepared us real well. We got a lot of young guys and we’re getting confidence. Everybody’s making plays,” said Lane, who also had a sack. “As long as we keep the energy up, we should be good.”

Spilman picked off two passes in the second half, and sophomore Jayden Barksdale intercepted a pass. Sophomore linebacker Keyon Green and junior defensive back George Russell each recovered a fumble, and junior Mattheus Carroll had a sack.

The Greyhounds’ offense, under direction of former Ravens running back coach Matt Simon, finished 362 yards Saturday with 279 on the ground. Bach tipped his hat to the offensive front of Gladis, Grinnage, Crites, junior RJ Mingo and freshmen Miles Roberts and Amir Crawley.

In a jubilant postgame huddle, Bach hoisted up Barksdale, whose interception capped Gilman’s victory. The last time the Greyhounds won a season opener was 2016 at Dunbar in Tim Holley’s first game as Gilman coach, following the offseason departure of longtime coach Biff Poggi and most of his staff.

The Greyhounds are a shell of those powerhouses squad that lorded over the MIAA A for two decades, but there’s reason for optimism.

“We were senior-heavy, our roster numbers were a little low. It was hard on the seniors having a third coach in four seasons,” said Bach, whose team hosts Loyola Blakefield next weekend. “We’re going to see great development with these young guys offensively Last year, it was the defensive system.

This is what we’re going to be and we can finally start building on that. A whole lot of our offensive and defensive packages aren’t even in yet. We’re starting to build a base.” 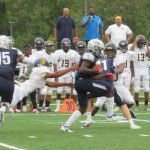 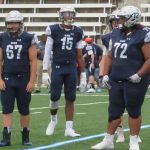 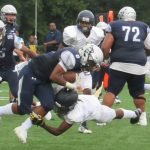 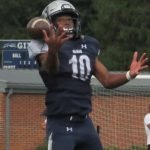 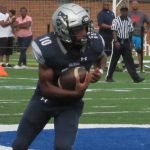 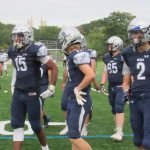 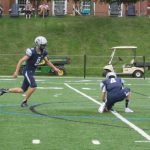 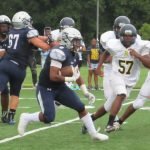 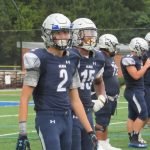 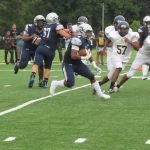 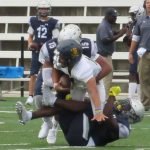 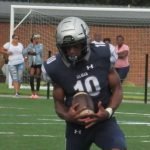 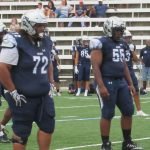 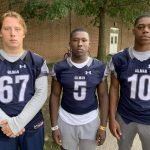 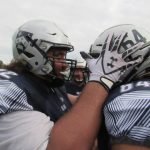 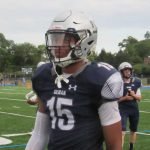 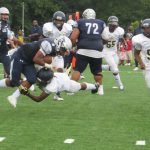 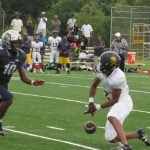 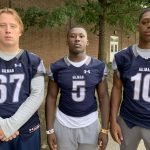 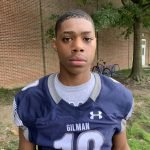 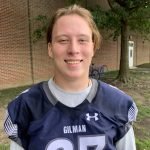 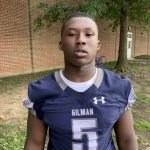 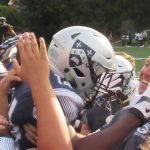 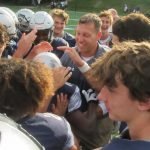