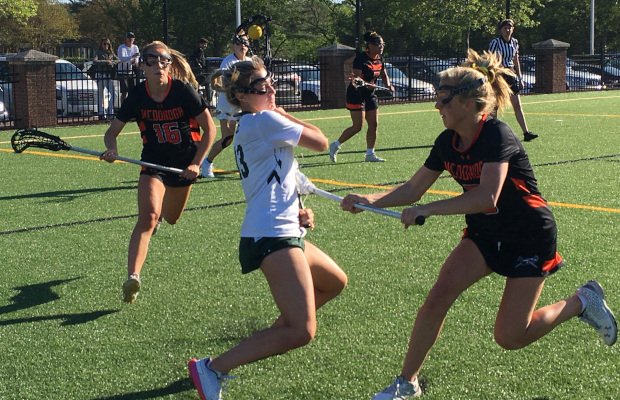 St. Paul’s junior attacker Natalie Shurtleff looks to avoid a check by McDonogh freshman midfielder Mckenzie Brown as Eagle senior midfielder Coco Vandiver approaches in Tuesday’s IAAM A Conference lacrosse semifinal. The No. 2 Gators advance to the final with a 13-9 victory over the third-ranked Eagles in Brooklandville.

Following a 20-7 demolition by Glenelg Country School two weeks ago, the St. Paul’s School for Girls lacrosse team went back to the drawing board.

Injuries to key defenders, including Stanford University-bound senior Olivia Rose, junior Grace Schlossberg and sophomore Kira Balis, didn’t help the Gators in a game that the Dragons dominated from start to finish. 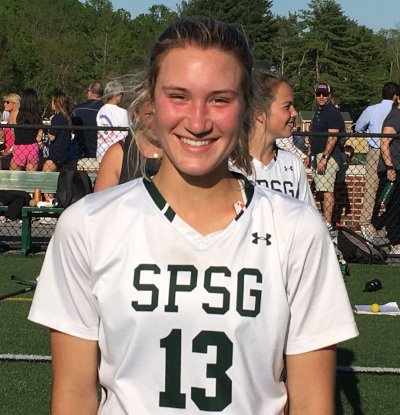 St. Paul’s junior attacker Natalie Shurtleff scored five of her game-high six goals in the first half when the Gators built a 10-2 advantage Tuesday. The Gators will play top-ranked Glenelg Country School for the IAAM A title, Friday night at U.S. Lacrosse in Sparks.

After that, St. Paul’s coach Mary Gagnon promised that her team would regroup.

On Tuesday, the defending IAAM A Conference champs delivered on that promise by topping McDonogh, 13-9, in a playoff semifinal to earn a rematch with Glenelg Country — which has supplanted the now second-ranked Gators at the top of the VSN Top 20 Girls Lacrosse rankings.

The Gators and Dragons are slated to meet in the championship on Friday at 7 p.m. at Tierney Field on the USA Lacrosse campus in Sparks, weather permitting.

“I told you that we would regroup,” Gagnon said, noting that a 12-8 verdict over Notre Dame Prep in a quarterfinal helped settle things down.

Credit freshmen Lily Peek and Caroline Hoskins for helping St. Paul’s (16-1 overall) to shore up a backline that was also bolstered by the return of Balis, who played against McDonogh despite having an injured shoulder.

Moreover, as if it wasn’t enough for Anna Regan to have another banner day in the circle — the Gators claimed 17 of the game’s 23 draws — the junior midfielder also dropped down to play some solid “D.”

St. Paul’s carried on from there, building a 10-2 halftime advantage over the Eagles (15-3) with Shurtleff scoring five times and adding an assist during a torrid opening period.

Her lone goal of the second half came on an assist from junior midfielder Lauren Steer, who totaled a game-high four helpers.

“I just know as a team that we have to work together,” said Shurtleff, who also is a member of the draw team.

And with Regan doing her thing, there were plenty of opportunities for Shurtleff and her mates to harass the Eagles’ defense.

“I don’t know how she does it,” Shurtleff said about Regan’s ability to either grab the ball herself or shoot it out to her (Shurtleff) or fellow wing Kendall Steer. “It really gives us a lot of confidence and helps us to push our fast-break.”

Edmondson scored her third, fourth and fifth goals of the contest to finish the Eagles’ 5-0 closing run.

It wasn’t enough, however, as McDonogh, winners of 10 of the last 12 IAAM A titles, will not be in the championship game for the first time since 2007.