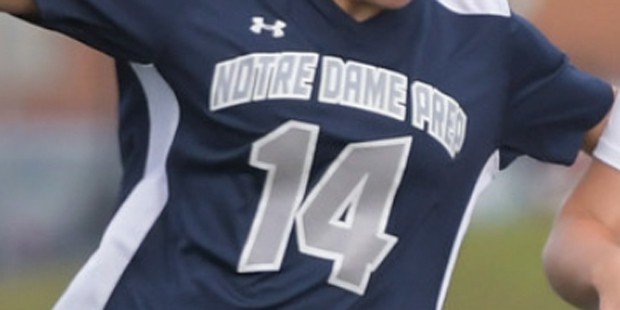 Sidelined from high school soccer since early August, the girls squads from Notre Dame Prep and John Carroll School finally got the opportunity to compete on the pitch, Wednesday night, as NDP visited Bel Air to challenge the host Patriots in the belated 2020 season opener for both squads, as part of the IAAM’s 2020 fall open-season.

The excitement of the moment translated into a thrilling result, as NDP, on a goal by sophomore Sarah Goodison captured a 2-1, come-from-behind, overtime victory.

With less than three minutes to play in the first overtime period, Goodison got off a hard shot, from close range, that she caromed off of JC keeper Mya Gerbes and into the net.

The first half was tightly contest, but John Carroll broke on top in the 38th minute with a goal from Sydney Queen who powered home a feed from Megan Palm.

NDP turned up the intensity after intermission and started creating more opportunities in the offensive end. The equalizer seemed inevitable and finally came in the 19th minute, when Christine Scott converted a feed from Natalie O’Brocki, near the left post.